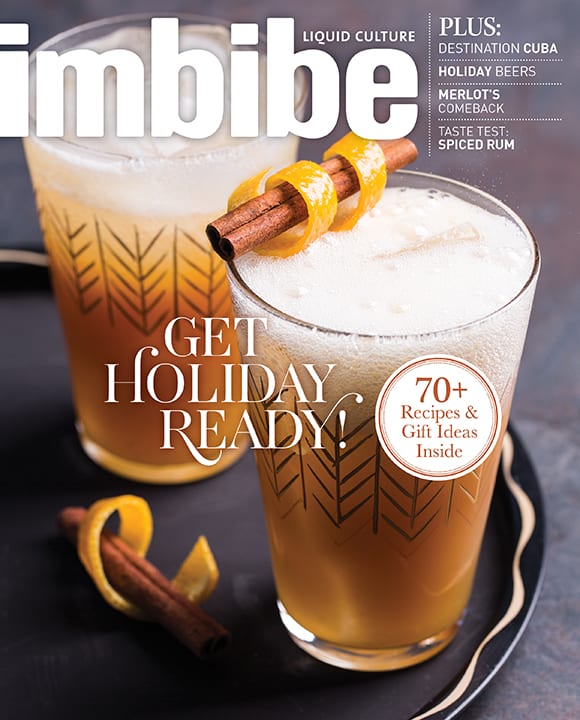 Brighten holiday drinks with the crisp flavor of winter citrus.

Imbibe-approved gifts for everyone on your list. Read More »

The Case of the Missing Merlot

Twelve years after Sideways, Merlot is still largely overlooked— can it recover? Some signs point to “maybe.” Read More »

Made in the Shade

As U.S.-Cuba relations thaw, Americans are packing their bags for Havana. How has Cuba’s capital weathered a half-century of embargo and isolation? Read More »

Five chai blends, date cocktails, anatomy of the New York Sour, and behind the scenes with handmade-goods purveyor The Commons.

Paying homage to the past has always been in style.

Bringing the virtues of Barolo Chinato to the cocktail glass. Read More »

Bartender Doug Quinn is right at home in the spotlight.

Make your holidays extra decadent with this dreamy drinking caramel.

Brewer Todd Crowell on where to drink in Missoula, Montana.

Crab soaks up the flavors of beer and wine. Read More »

Wines to Have on Your Radar

Sommeliers weigh in on the wines you should be drinking now. Read More »

A Guide To Japanese Green Tea

Havana By The Frame

Cuba’s drinking capital is a feast for the eyes. Read More »

What American Bartenders Can Learn From Cuba

Bartenders reflect on their travels through Cuba. Read More »

Discover the story behind the iconic cocktail’s name. Read More »

Bartender Doug Quinn explains his approach to hospitality and the deeper truth behind the “Quinn’s Laws.” Read More »

Click here to buy a copy of this issue now.