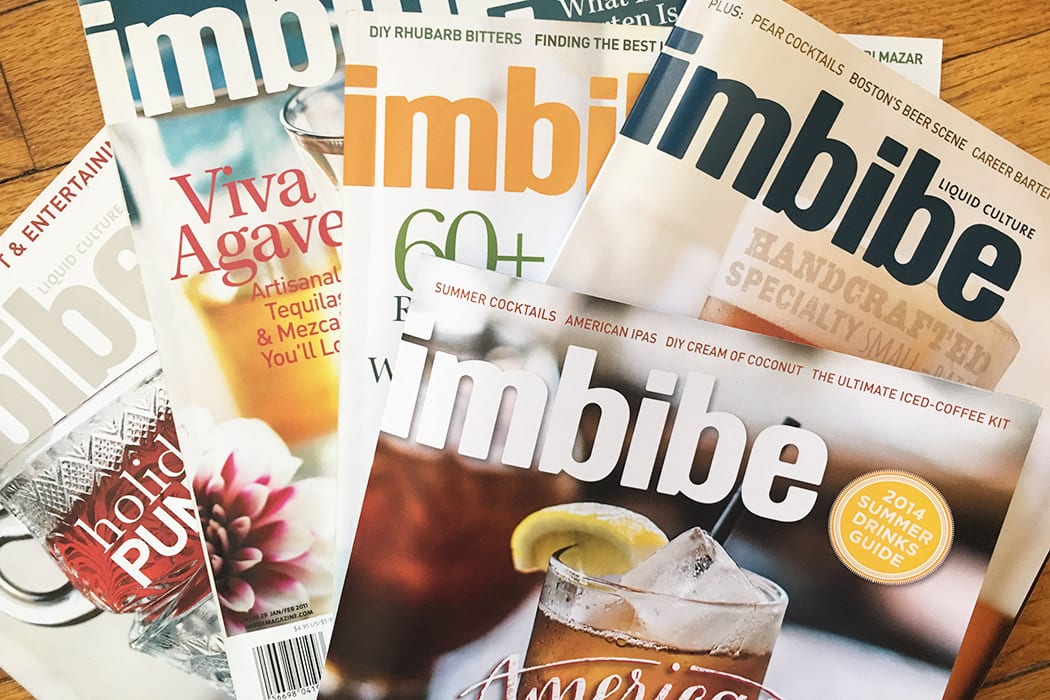 For 10 years, Imbibe has been sharing stories about the people, places and flavors of the drinkscape. As part of our 10-year anniversary celebration, we asked some of our longest-running writers to tell us which tales they most enjoyed weaving in the pages of the magazine. Revisit the stories with us!

Defining Craft Beer, September/October 2014
“The word ‘craft’ was once a synonym for brewed rebellion, something different from mainstream beer. Now the word has been co-opted, as ubiquitous as ‘artisanal.’ In our now-normal era of brewery buyouts, it was fascinating to dive into the power of language and what it means to beer.” —Joshua M. Bernstein

Southern Sweet Tea, July/August 2014
“When the editors called me to discuss writing an entire article on southern sweet tea, I initially turned it down. ‘Sweet tea is just sugar poured into Lipton. We won’t get three pages out of it,’ I said. “We love it as Southerners, but there’s no real story there.” And they did assign it to another writer, but that person fell through and it ended up back in my lap. I’m so grateful, because, as it turns out, southern sweet tea might just mostly be sugar poured into Lipton, but there are all these fun, anecdotal stories behind the service of it. The evolution and history is so cool. It remains my favorite assignment.” —Jenny Adams

The Sweet and Lowdown: New York Ice Wine, September/October 2011
“This story on New York ice wine was a really intensive, nail-biter piece to do. As a writer, you just had to give yourself over to Mother Nature—I was waiting for weeks on a call from the winemaker, Steve DiFrancesco, to say, “It’s time!” and when he did I had to jump in my car with the photographer and drive like a demon up to the Finger Lakes five hours away to be there for the harvest. We picked in the dark at 13 degrees—my fingers and feet were frozen but it was so exciting and so much fun. It gave me a lot of respect for this particular sect of winemaking (and also showed me how much, as a reporter, I really enjoy diving deep into a story like this).” —Amy Zavatto

Characters: Chris Hannah, May/June 2011
“I still like my profile of Chris Hannah from May/June 2011. It holds water five years later. It could use a splash of updating, but it reflects the thing I like most about Chris: he doesn’t much change, and certainly doesn’t chase trends. He likes classic cocktails and variations thereof, he makes them well, and he keeps on making them. He’s a lone star in a rapidly changing world.” —Wayne Curtis

Rhode Island Coffee Milk, May/June 2011
“I’ve written many stories for Imbibe over the years, but I never had as much fun researching one as I did for this short piece on coffee milk, the peculiar official state drink of Rhode Island. I am obsessed with regional culinary traditions, and, per capita, tiny Rhody probably has more than any other state in the union. Visiting Providence for the first time was like passing through a looking glass at the back of your refrigerator. Strange, wonderful eating and drinking habits. For months after the article came out, I kept bottles of Autocrat and Eclipse coffee syrup—the state’s two big brand rivals—in my own fridge. I never did figure out which one I preferred.”—Robert Simonson

Viva L’Arte, January/February 2010
“I’ve been a longtime champion of sherry, so traveling to the region of Jerez in Spain and having the chance to meet the makers, taste from the source and write about one experience in particular for “Viva L’Arte” was pretty inspiring. It sounds cheesy, but the whole thing was really epiphanic in terms of rethinking how we define both art and tradition.”—Tracy Howard Garton