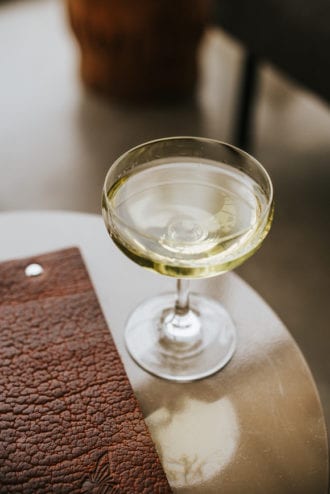 The Peruvian, an Alaska riff from The Hive.

For countless cocktails, a feature in Harry Craddock’s The Savoy Cocktail Book is the equivalent of Willy Wonka’s golden ticket. Preserving today’s best-known classics like the Corpse Reviver No.2 and the Bobby Burns, many will tell you it’s the clearest road to cocktail immorality. For the Alaska, however, it was a slower burn. Despite being preserved in the book’s venerated pages, this elegant blend of botanicals all too quickly found itself collecting dust in the farthest reaches of Martini-inclined minds. “I believe the Alaska never grew into a widely known cocktail [due to] the addition of [yellow] Chartreuse,” says James Bolt, owner of The Gin Joint in Charleston.

The yellow French liqueur (the honey-sweetened follow-up to green Chartreuse) was developed in 1840 by the Carthusian order of monks, who still produce it today. It was a bountiful tonic (the recipe calls for more than 130 plants and botanicals) that fell out of favor over the following century as palates leaned more toward the savory. “I think the Alaska is more herbal, while the Gibson is more savory,” says Bryan Dayton, founder and beverage director of Half Eaten Cookie Hospitality. “The American palate is just getting more into herbaceous flavors, where savory Martinis have been part of American drinking culture for decades.”

Thanks to this recent turn in tastes, the unapologetically spirited and nearly abandoned Alaska has re-entered the cocktail arena, making the rounds on menus across the country. With it, modern variations have also emerged. At The Gin Joint, Bolt serves a Top Shelf Alaskan which gives the cocktail a luxurious makeover, made from gin distilled in Germany’s Black Forest, an extra-aged Chartreuse, and a whisper of salt. For the Top Shelf Alaskan, Bolt combines 2 ounces of Monkey 47 Gin, ¾ ounce of Yellow V.E.P. Chartreuse, 4 dashes of orange bitters and 2 dashes of a saline tincture (1 part kosher salt to 4 parts water), stirred on ice, then strained into a Nick & Nora glass and finished with a twist of lemon and sprig of rosemary for garnish.

The Alaska invites small adjustments, such as a finishing mist of sherry as in Le Sel’s variation or softening the drink’s boozy build with the addition of an aperitif. At Half Eaten Cookie’s OAK at fourteenth in Boulder, Colorado, bar manager Scott Ruggiero relies on blanc vermouth to tame his Alaska riff, 47 Degrees North. “It’s a great after-dinner sipper with all the soothing botanicals,” Dayton says. And even greater lengths of exploration, like swapping the base spirit, add welcome freshness to the century-old formula.

“Anytime I see a classic gin cocktail, I always think to myself, ‘How would that be with pisco?’ ” says John Robinson, assistant food and beverage director at The Hive, in Bentonville, Arkansas. “When looking at the classic Alaska, I knew that we could create a cocktail in the same vein but something that would read as a lighter, more modernized version of the original.”

Combining pisco with yellow Chartreuse and Lillet Blanc stirred with an expressed orange peel, Robinson’s Peruvian eases into the synergy of its combined elements. “I’ve always felt that pisco is extremely approachable and its floral-like characteristic complements the Chartreuse but ensures the drink is light and refreshing while still staying true to the Alaska’s spirit-forward template,” he says. Replacing the orange bitters with the oils of an orange peel introduces a similar aromatic component without the possibility of overwhelming with bitters, while “the longer finish [of the Lillet] helps the palate detect more of those subtle nuances created when the funky herbaceous flavors of Chartreuse and the floral, bright qualities in the pisco meet,” says Robinson.

“Customers love the classics but don’t always realize that what they’re drinking has been around for a really long time,” says Bolt. And so, a word of advice: Next time you’re at the bar and in the mood for a Martini, take a chance on the Alaska.