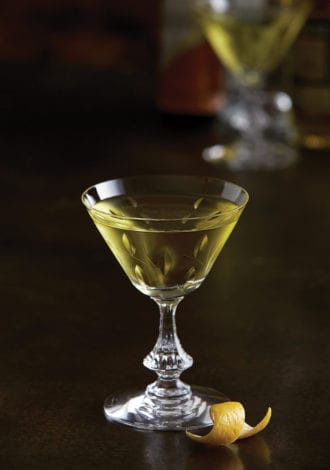 The Martinez, the Gibson, the Vesper—all close associates of the Martini, and they’ve also all experienced warmer welcomes during the classic cocktail revival than the pale gold Alaska. The Alaska cocktail first appeared in print in 1913, calling for Old Tom gin, yellow Chartreuse and a dash of orange bitters. Fast-forward to 1930, and the bitters had been dropped and Old Tom bounced in favor of dry gin, as the recipe was written in The Savoy Cocktail Book. Close to a century later, herbaceous flavors are back in vogue and the botanical-forward Alaska has followed suit.

At Louisville’s Proof on Main, the Alaska is added yearly to the bar’s Repeal Day menu, and they adhere to the Savoy proportions. “We also add a dash of orange bitters for aroma and roundness, as has become traditional since then,” says beverage manager Jeff Swoboda. Captivating in more ways than just its gentle hue, the elegant Alaska is primed to shake off obscurity and join its more popular classic counterparts on cocktail menus across the country.

Combine all of the ingredients in an ice-filled mixing glass and stir until chilled. Strain into a chilled coupe, and if using, express a lemon twist over the drink, then use as a garnish.

Japanese whisky builds a strong base for this Manhattan-inspired cocktail.