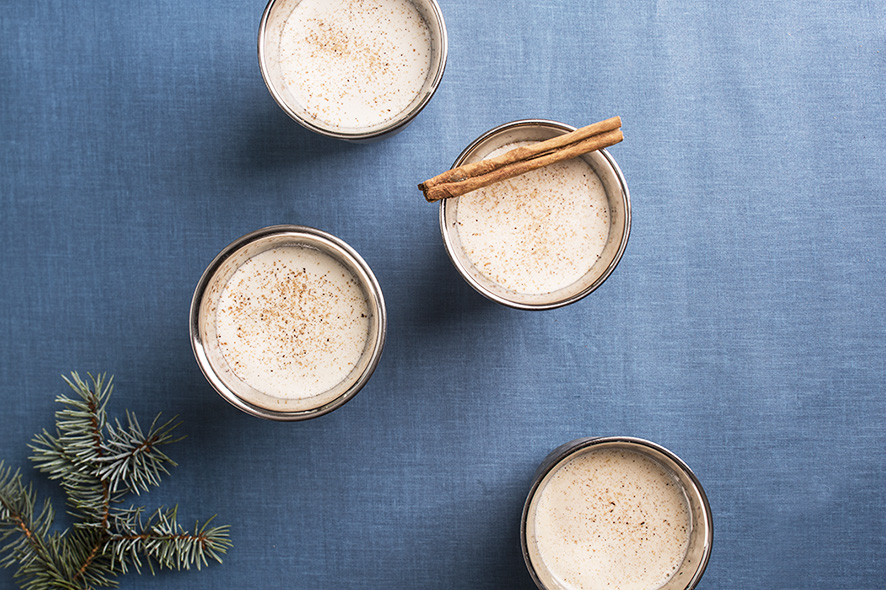 No holiday drinks canon would be complete without eggnog recipes. Eggnog’s history can be traced back to the medieval English drink posset, which was a hot egg-based wine or ale mixture, but variations can now be found around the world. In colonial America, it was often spiked with rum or whiskey; Germans have been known to include white wine in recipes, and France’s lait de poule (hen’s milk) incorporates orange flower water and Cognac. Here are some of our favorite takes on the holiday classic.

Every year, Gary Butch, co-owner of James Beard Award-winning restaurant Elizabeth on 37th in Savannah, Georgia, whips up a big batch of homemade eggnog for the holidays. Powdered sugar adds to the creamy consistency, while fruit brandies lend extra depth of flavor.

With a name translating to “little coconut” as a nod to the coconut cream in the recipe, Coquito is a tropical version of eggnog spiked with rum, sweetened condensed milk, eggs and coconut milk. Many point to Puerto Rico as its birthplace, and iterations can be found throughout the Caribbean. Author Vianney Rodriguez of Sweet Life has a family recipe here, and Roberto Berdecia of La Factoria in San Juan, Puerto Rico, shares his favorite recipe here.

You might have seen the vivid custard-yellow bottle tucked away in the holiday section of your local liquor store, but homemade Rompope—the Mexican version of eggnog—will taste much better than store-bought brands. It has roots in the Spanish ponche de huevo, or egg punch, and it was tweaked by nuns in the city of Puebla to include cinnamon, almonds and rum. Check out Winter Cocktails author María del Mar Sacasa’s recipe here.

Moose Milk is a holiday drink that traces its roots through the Canadian military. The eggnog-like concoction combines Canadian whiskey, rum, eggs, milk and other ingredients. Read more about the history of the drink here, and then get the recipe for Adam McDowell’s family moose milk here.

Bartenders are always looking for new ways to put creative twists on classic recipes, and among the more memorable of those variations is Jeffrey Morgenthaler’s tequila and sherry eggnog, Anu Apte’s porter-and Cognac-based beer nog, and Chris Spear’s Fernet-fueled Noggin Knocker. The chipotle-spiced Good Noggin’ from Las Vegas is another solid pick, and Nico de Soto’s Jingle Balls Nog, a fruitcake-like riff created for the Miracle pop-up, is a crowd-pleaser.

It used to be a challenge to find a dairy-free eggnog with all the richness of its dairy-filled counterparts, but today’s bartenders are increasingly finding creative ways to cater to the vegan and lactose-free diets. San Diego bartender Erick Castro devised a special recipe for Raised by Wolves, Kindred’s Necrinominog is a delicious version made with oat milk, and the (V)eggnog from Eileen Chiang at Wayan in New York City delivers richness by way of coconut cream, almond milk, and aquafaba.

If you prefer your eggnog in dessert form, try author Tiffany Howard’s cranberry eggnog cake. This vanilla cake rolled with spiced cranberry curd and eggnog buttercream frosting combines all of the best flavors of the season. The eggnog pudding from Butter & Scotch founders Keavy Landreth and Allison Kave is another decadent way to work the drink into dessert form.