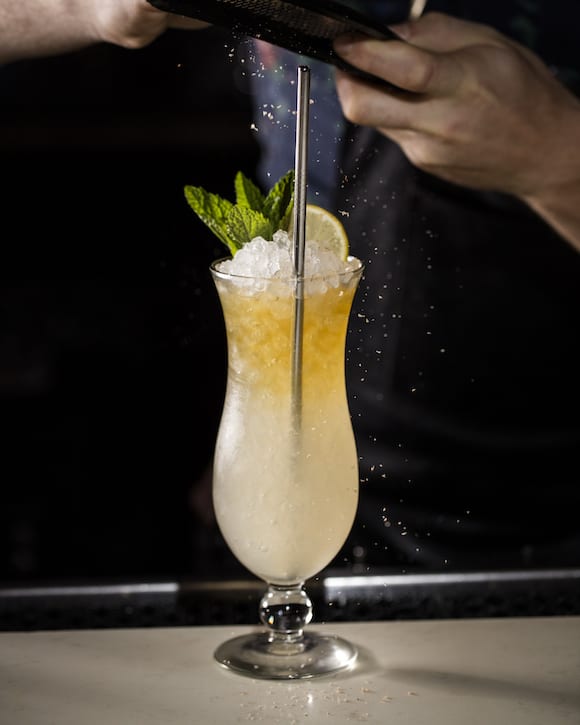 Like a global game of telephone, the Singapore Sling has morphed through multiple iterations and origin stories in the century since its invention. But the intervening decades have done nothing to diminish the drink’s popularity, still found on menus from dive bars to modern cocktail lounges across the globe. For our March/April Travel Issue, we tracked down a few versions of the tropical favorite, including a thoroughly modern take from Singapore bar Jigger & Pony. “We decided to have a sling on the menu after we decided that part of it would focus on classic drinks that originated in Asia,” says Giovanni Graziadei, Jigger & Pony’s principal bartender.

Instead of using juice, Graziadei infuses fresh pineapple into the gin, along with a smoky lapsang souchong tea. In addition to the more traditional Cherry Heering and lime juice, they also add a tart rhubarb purée, highlighting an ingredient originally cultivated in China. “A classic sling would have, arguably, about eight different ingredients, while most classic cocktails have between two and five, so there is a lot to play with and so many different combinations and balances,” says Graziadei. “Some could argue that the oldest recipes do not feature pineapple, but I think it is now part of the drink flavor profile.”

The original Singapore Sling is steadfastly claimed by the Long Bar at Raffles Hotel in Singapore circa 1915 when, as the story goes, social etiquette deemed it improper for ladies to drink alcohol in public, so bartender Ngiam Tong Boon crafted a drink that looked like fruit juice. In addition to the drink’s gin base, published recipes of the ’20s and ’30s often called for additions of cherry brandy and/or Benedictine, but the original recipe remains debated, and today Raffles goes full tropical with inclusions of curaçao, pineapple juice and grenadine. “The Singapore Sling has become kind of like the fruit salad of cocktails. … You can make it with nearly anything,” says Justin Lavenue, co-owner of The Roosevelt Room in Austin, Texas. “The fact that there are so many ingredients in the drink makes it easy to give it a unique spin just by Mr. Potato Head-ing a couple of them with other ones. For instance, you can substitute the fruit liqueurs for two herbal liqueurs to match the Bénédictine, and BOOM—you’ve got something new.”

The Roosevelt Room’s Singapore Sling (re-dubbed The Pharaoh’s Dance) makes a pretty radical departure from the original. To up the herbal and floral characteristics, they make a Thai basil syrup in place of the grenadine, swap the pineapple for lychee, and even top with a splash of IPA instead of soda water. “The end result was something far from the original,” says Lavenue, “but it is damn delicious and has been a focal point on our menu for over three years.”

It’s these pliable parameters that bars use as a jumping off point for continued experimentation. At The Happiest Hour in New York City, the drink goes for a spin in the blender, while at Across the Pond in Phoenix, pineapple ice cubes melt slowly into a Japanese whisky-based take on the classic. At Bon Voyage! in San Francisco, the new bar from the team behind Trick Dog, they offer a vacation vibe and a full lineup of creative slings. “It felt like the perfect drink to sum up the inspirations for Bon Voyage!. It’s evocative of travel and of several historical periods,” says co-founder Morgan Schick. “The first one we tackled was just our ‘standard’ sling, which we wanted to make a midway point in flavor between the Charles Baker recipe and the official Raffles recipe. The others were explorations of ways to put the same flavors together in different styles of drinking.” Those styles include a Garbage Sling with housemade pineapple tepache and rice milk, a Sling-tini with pineapple and ginger-infused gin and cherry vermouth, and a Sling Shot, which includes a collaboration sling-styled beer from Ale Industries and a shot of your choice.

So why the enduring love for the sling? “I think it has an element of escapism that you just don’t find in other classic cocktails,” says Jigger & Pony’s Graziadei. “People all over the world order Singapore Slings to feel like they’re in a fictional version of Singapore.”