The Scent-Inspired Cocktails of Castalia 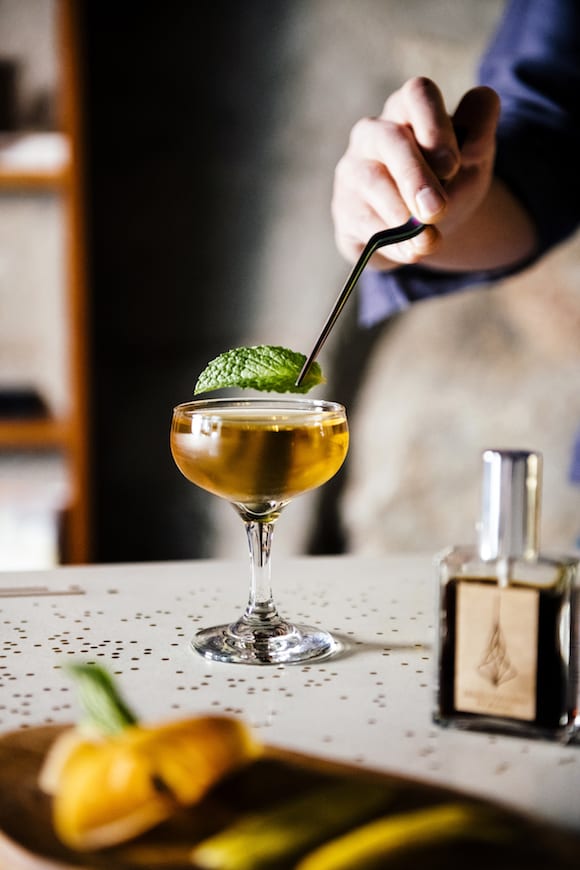 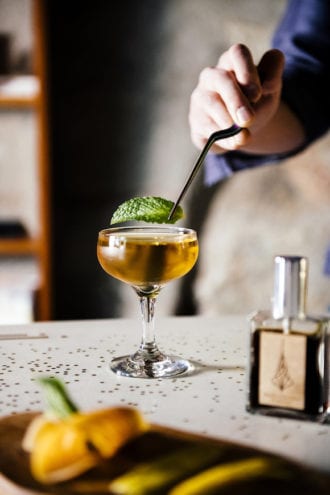 Finding a good cocktail bar in Detroit has become increasingly easy, but to locate the one-of-a-kind creations at Castalia, you’ll want to follow your nose. Opened this spring by husband-and-wife team Kevin Peterson and Jane Larson, the basement-level bar (located in a historic Victorian mansion in midtown) is a fragrance shop by day and an 18-seat cocktail bar by night.

The couple started Sfumato fragrances about five years ago, with Larson bringing her experience in art and design to the table and Peterson coming from a career in the culinary field. “I started playing with fragrances just as a way to keep that part of my brain working,” he says. “There a lot of similarities between the way flavors are put together and the way you would build a fragrance.”

Together they created a line of eight all-natural fragrances ranging from the citrusy Epiphany to the herbal Apricity and sold them online and at pop-up events. They also hosted a series of dinners where they would pair each of their scents with a food dish, a cocktail and an album, to create a full sensory experience. The owner of the historic building they currently occupy happened to attend one of the dinners and offered them the space to house Sfumato and Castalia. Sfumato opens at noon and features display cases filled with fragrances, essential oils and incense. At 6 pm, the cases flip around, tables and benches unfold from the wall and barstools emerge as Castalia opens for business.

Each of the cocktails on Castalia’s menu is created to pair with one of Sfumato’s eight scents. “Fragrances are built on a structure of top notes, middle notes and base notes, so the top notes hit first and the base notes stay the longest,” says Peterson. “The base is whatever spirit you’re going to use, the middle is liqueurs or juices, and the top notes are often tinctures of other aromatic components.”

The spirits they use range from barrel-aged options like bourbon and rum that emulate woodsy and resinous scents, to gins for their aromatic botanical profiles, and an extensive collection of amari. When served, the cocktail’s matching fragrance is spritzed onto either the napkin or the garnish, for comparison. “I think a lot of people don’t realize how much flavor is due to scent. When you’re eating or drinking, a lot of the aromatic components are going up the back of your throat,” says Peterson. “What we’re trying to do is get everything harmonizing, so it’s multiplying the effect in your brain—like signals from every direction.”

While Sfumato’s core fragrances stays the same, Castalia’s cocktail menu changes seasonally. If the spicy, cedar notes of their Gravitas fragrance was initially conceptualized to pair with a wintry sipper, the next iteration might see it matched with a citrus-forward springtime aperitif. On the current menu, the Pareidolia is a riff on a Daiquiri with a split base of rum and aquavit. It’s served alongside the scent Apricity, which is imbued with herbal aromas of angelica seed, basil and clary sage. Meanwhile, chai-infused Carina Carina pairs perfectly with the spice-forward Gravitas scent, and the smoky, herbal To Build a Fire cocktail is matched with the Survival Instinct fragrance.

“The most surprising thing for me has been the way complete strangers will sit next to each other and start a conversation based on how they experienced the scents and the drink,” says Larson. “They’ll say how it reminds them of their grandma’s cedar chest, or a place they went to as a kid. I think people let their guard down since it’s out of the ordinary, and they’re experiencing something together revolving around a sense that they don’t normally think about.”