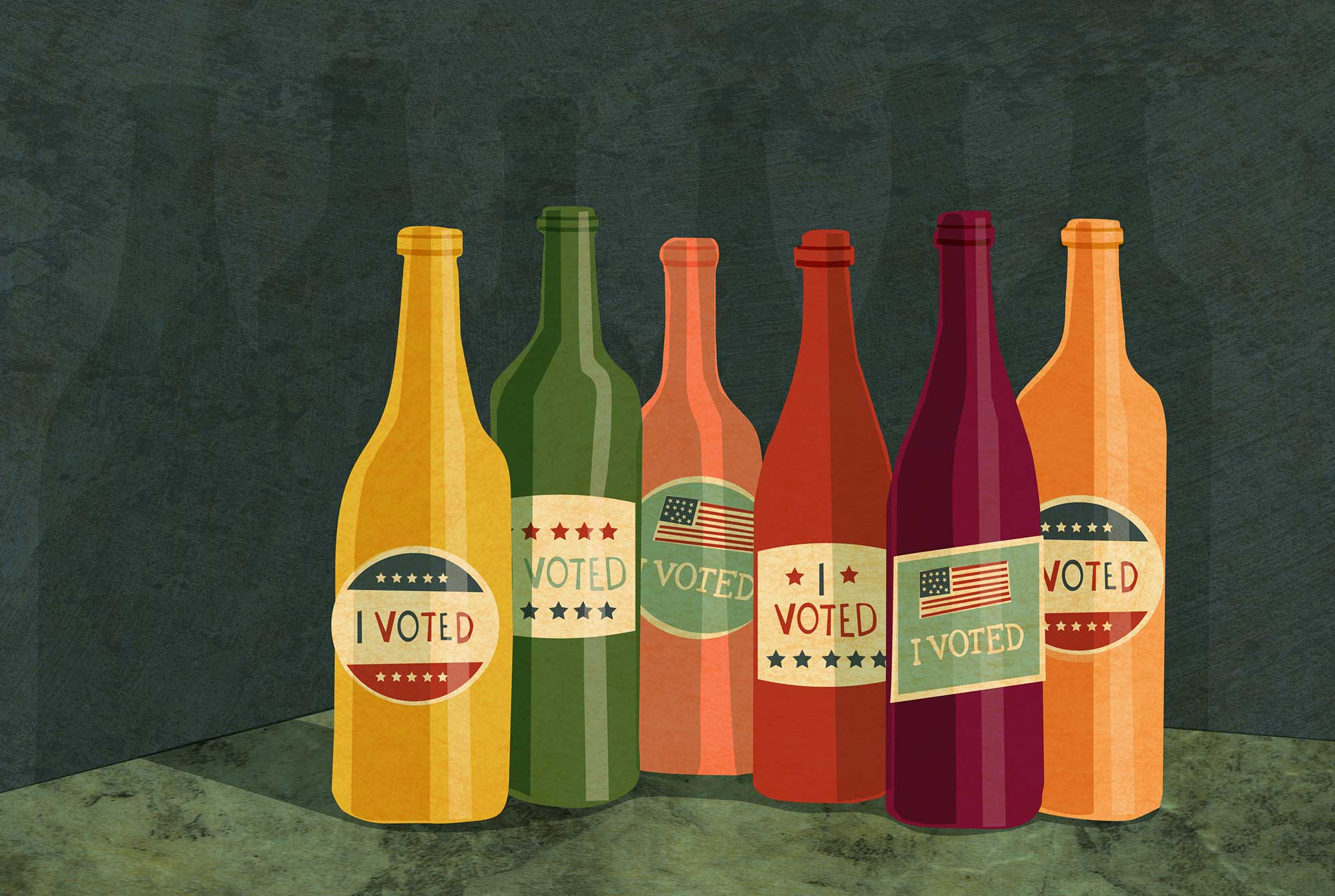 If the connection between wine and voting rights doesn’t seem immediately clear, pour a glass and consider this: In October of 2019, the U.S. government levied a 25 percent tariff on European goods, including wines, over a dispute about airplane parts and tech companies. Tariffs as high as 100 percent were threatened, even though it was already American importers, retailers and restaurants who were mostly suffering the hit. Meanwhile, in the vineyards, harvest relies on the work of thousands of migrants who labor under increasingly hostile government scrutiny, even as smoke fills the air from fires currently decimating Napa and Sonoma counties. From the land to the production to the distribution, wine bears the weight of decisions made by elected officials.

“I always say that wine tells you everything about economics, politics, culture, art, climate change—what’s happening in the world,” says Julia Coney, a wine writer, speaker and consultant who splits her time between Washington, D.C., and Houston. “We can’t dismiss wine, or just talk about wine. It all works together, nothing is separate. And we need to stop thinking that it’s separate because that’s part of the problem.”

Coney joined the volunteer project Vines 4 Votes, an initiative spearheaded by Michael Whidden, who has worked in wine importing, distribution and sales for the better part of the last two decades. “I used to be a lawyer, and one of the things that happens with wine that doesn’t happen when you’re a lawyer is that the product of your job really unites people,” says Whidden.

With that in mind, Whidden reached out to other wine pros to assemble a small team united for the purpose of making change in this extremely difficult year. In addition to Coney, Whidden was joined by sommelier and beverage director Jake Lewis, importer Laura Süpper, Burgundy-based wine professional Icy Liu, and importer and sommelier Jeff Porter. “We looked at a bunch of different ideas about what to support, and I’ve been very adamant about voters’ rights because it’s the key to everything; it feels like the only way we ever actually get a say—and Texas has an abysmal record,” says Porter, a native of the state.

The team’s resulting concept became Vines 4 Votes, a virtual wine auction that will donate 100 percent of proceeds to the ACLU of Texas. “Texas is one of the most hostile states for voting rights in the country. The government in Texas repeatedly tries to shrink the size of the electorate by making it harder for people to vote, especially Black people and people of color,” says Sarah Labowitz, policy and advocacy director for the ACLU of Texas. “The state has prevented people from using mail ballots during the pandemic and, just this week [Oct. 1], Governor Abbott reduced the number of drop-off sites for mail ballots to just one per county.”

The funds donated to the ACLU of Texas will support the organization’s work to promote safe and fair elections, including recruiting 1,000 poll watchers to watch for any signs of voter suppression, staffing an election protection hotline, and educating voters throughout the state. “All my family is there. We’ve talked about this for years—who is taking who to the polling place, what polling places have moved … and I talk to my friends there, and it’s getting so much worse,” says Coney. “[Vines 4 Votes] is a little way of not just saying “Go vote”—which is great—but what this does is let people know that we can talk about wine, we can talk about justice, we can talk about what is wrong with a lot of things, and try to come together because we want to make a better world.”

In the two months since the initiative launched, Whidden and the team received an influx of donations for the auction, which now comprises more than 70 lots. There are several coveted “unicorn” bottles, such as a 2009 Marie-Noelle Ledru Champagne, multiple vertical selections, and even experiences like a recreated wine dinner from Eleven Madison Park. “I think one of the most interesting lots is a 10-year vertical of Knoll Grüner Veltliner, which is pretty cool and geeky,” says Porter. “The outpouring from the community has been amazing, and the excitement behind it has been really energizing and made us feel like we can really do something—we’re not just a luxury good where we’re hobnobbing with fancy pants people. We can put our souls into it and try to effect some change, be it small or big.”

The virtual auction will run from Monday, Oct. 12 through Friday, Oct. 16. Vines 4 Votes will also be hosting limited-capacity Zoom meetings to explore the available lots. Those who are interested can sign up through the website and follow the Vines 4 Votes Instagram to stay updated on the auction. “Without regard to which way the pendulum is going to swing, access to the ballot and to the controlling levers of democracy is a nonpartisan issue,” says Whidden. “I’m proud to be part of a trade community that has rallied so generously to help us get to this point. …You should be able to sit across the table from anybody and have a glass of wine, share a bottle—it’s a connector. And voting connects us all as Americans.”

Members of the hospitality industry are coordinating to get their voices heard by state governments. 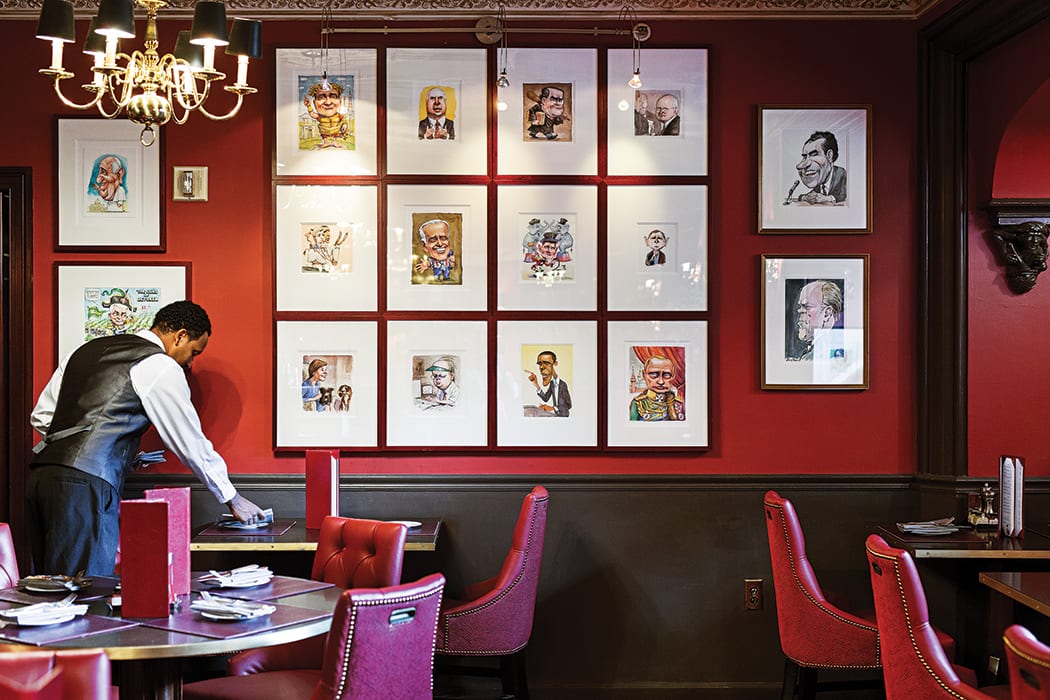 A nation that drinks together stays together.