The Culture of Thai Drinking Food 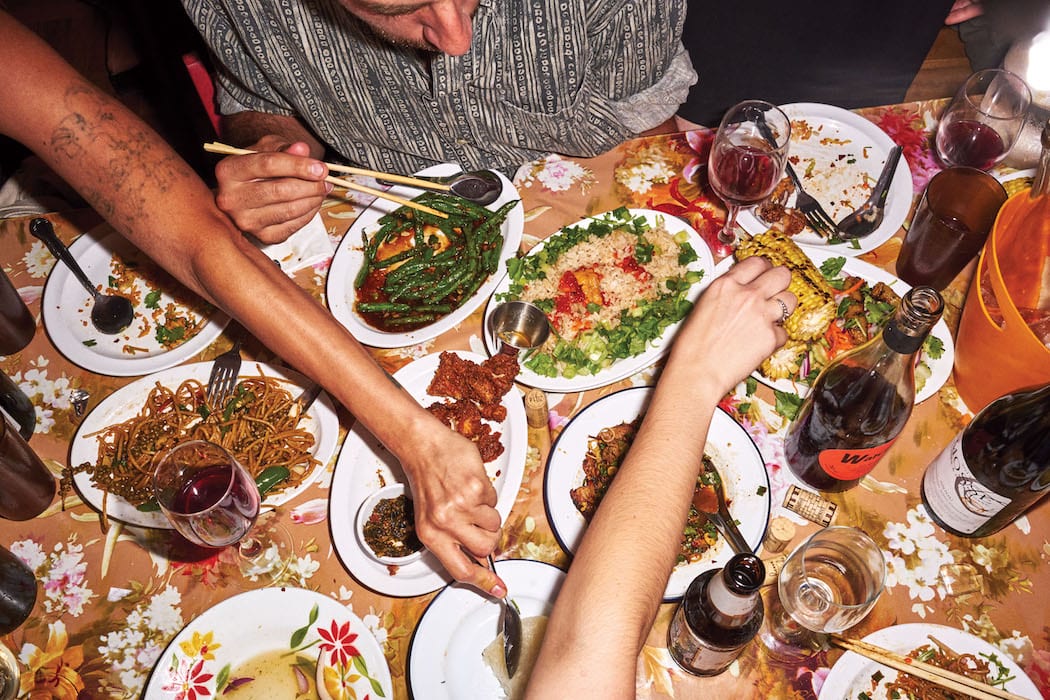 On a 14-hour bus ride from the Thai fishing village of Chumphon to Bangkok, Andy Ricker found himself crammed among the bench seats with local squid fisherman who were happy to pass the hours by sharing a bottle of Mekhong, a spirit that he describes as “a sort of hectic Thai rum.” It’s a story that Ricker, founder of the Portland-originating Thai restaurant Pok Pok, describes in his new cookbook, The Drinking Food of Thailand. It also illustrates the convivial approach to drinking in Thailand that brings together friends and strangers over watery, ice-filled beers, whiskey (or Thai interpretations of it) topped with soda, and an abundance of shareable bites. “My experience in Thailand has shown that it is extremely rare to find a situation where people drink just to drink with no food at all,” says Ricker. “There is always something to eat, even in the most casual circumstances in rural Thailand. If you roll up to a local store on the side of the road that is serving lao khao, or rice whiskey, by the shot, they always have some mayom or tamarind …or even just a little bowl of shrimp paste—something salty and pungent.”

At street-side food stalls in cities across Thailand, it’s common to find bite-size offerings of grilled meats, like jin tup, eaten with your fingers and dredged through vibrant chile dips. It’s the type of food that first put Pok Pok on the map, like Ricker’s famous fish sauce chicken wings, and it falls under a category of cuisine dubbed aahaan kap klaem—essentially drinking food. “It’s some of my favorite food to have in Thailand—crunchy, fatty, salty stuff,” says Ricker. “I love eating that way, just little bites of this and that. But more importantly, I like the whole social interaction of drinking and sharing food.”

It’s an appreciation shared by Kris Yenbamroong, chef and owner of L.A.’s Night+Market restaurants, who also has a new cookbook out this fall, Night+Market: Delicious Thai Food to Facilitate Drinking and Fun-Having Amongst Friends. Yenbamroong describes the food as aharn glam lao, exemplified by dishes like his Crispy Pig Tails and Pork Toro—quick-cured pork jowl glazed with soy sauce and grilled until charred and crunchy, then dipped in a spicy sauce. “It’s something a group of people can share, which is an important aspect of it,” Yenbamroong says. “I mean, you could certainly sit alone and drink, too, but it’s more fun to come into the restaurant and order six plates and share a little of each. It’s stuff that’s salty and fatty and almost begs you to drink something thirst quenching.”

Though both chefs love the food that accompanies a night of drinking, Yenbamroong and Ricker take starkly different approaches to what qualifies as a refreshing beverage. At Night+Market, that often means wine, with a list curated by Yenbamroong and a nod to the quaffable capability of the beverage, paired with his belief that, because there is no history of winemaking or wine drinking in Thailand, you have total freedom. Pour a lightly chilled Gamay with fatty, flavorful grilled pork; pair a bubbly Pet-Nat with fried and vibrantly spiced dishes; and when in doubt, he says, Chenin Blanc. “I joke sometimes that even at this point for Night+Market, I still think of it like a wine bar, even though no one else does,” says Yenbamroong. “When we opened, we actually had more wine on the menu than food. We had like eight menu items and 25 wines. I thought of it as a place for people to come drink and we would just have food that facilitates that, not the other way around.”

At Pok Pok, Ricker chose a route more influenced by traditional flavors with his auxiliary restaurant Whiskey Soda Lounge, the name itself a nod to the popular Thai drink. “I don’t do things the way they do in rural Thailand, obviously, but I saw an opportunity to make cocktails using ingredients that were in the kitchen already,” Ricker says. At the bar, they serve a house version of the classic Southside made with mint syrup instead of fresh herbs, a Tom Collins made with salted lime, and a Whiskey Sour riff. “Our Tamarind Whiskey Sour is made with tamarind paste, lime juice, palm sugar and whiskey, and it all works really well. The drinks we do at Pok Pok have always been in service of the food.”

Whether adhering to tradition or offering the unexpected, pairing drinks with the crunchy, the savory, the salty and the sour translates across cultures. “I’ve chosen cocktails as what I think works best,” says Ricker. “Kris has chosen wine. Most Thai restaurants use beer. It’s all fair game. At the end of the day, my goal is to make something that tastes good, and I think there is room for a lot to happen.”