Where to Drink in Victoria, British Columbia 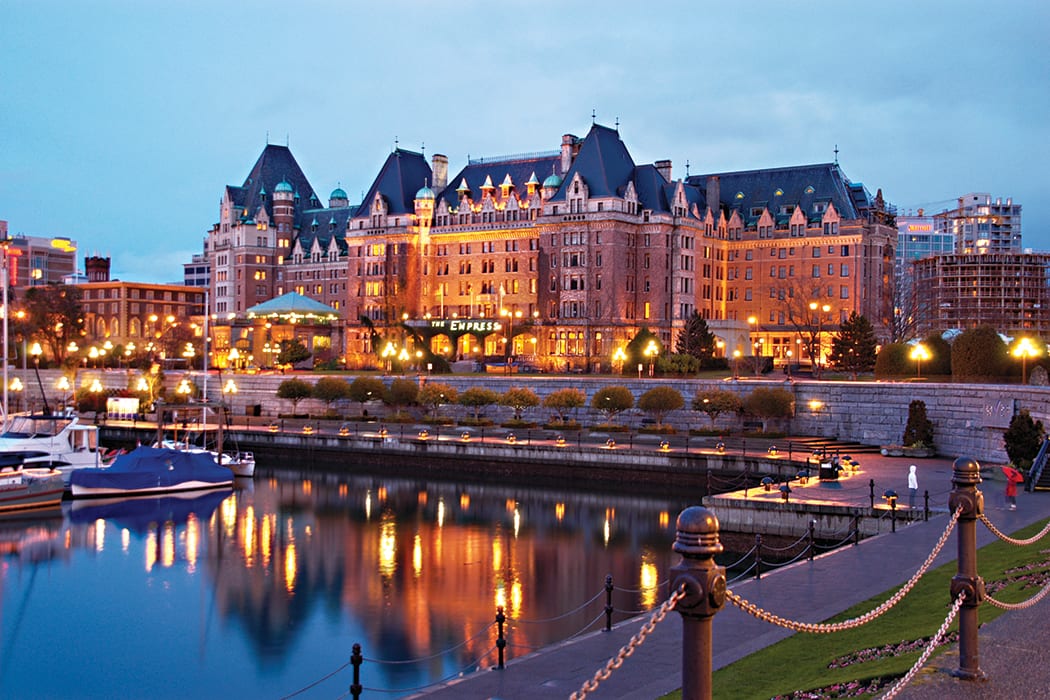 Hugging the stony shoreline on the southern tip of Vancouver Island, British Columbia’s capital city boasts a gorgeous, if anachronous, landscape, with historic landmarks like The Empress Hotel camouflaging the modern movements of Victoria’s evolving drinks culture. Australian bartender Shawn Soole moved to Victoria more than a decade ago and has influenced this evolution firsthand, bringing international attention to spots like Clive’s Classic Lounge before opening Little Jumbo in 2013 and the (now closed) Foxtrot Tango Whisky in 2017. Soole now helms the bar at Pagliacci’s, and here he offers a tour of his favorite drinking spots in his adopted hometown. “For a city that has less than 100,000 people, it has a vibrant food-and-drink scene,” he says. “Getting a pour-over coffee in the morning, drinking a pint of ale at lunch or enjoying a cocktail is not just a treat, but a way of life.”

Hey Happy
Since opening in the summer of 2014, this downtown coffee shop helmed by former Canadian Barista Champion Rob Kettner has been at the forefront of the city’s coffee culture. Sourcing from roasters like Heart in Portland, Phil & Sebastian in Calgary, and 49th Parallel in Vancouver, Hey Happy brews every cup to order via pourover, in addition to whipping up creative alcohol-free mixed drinks like an espresso mint julep and caffeine-free options like housemade cashew milk with turmeric, ginger and vanilla. Soole keeps it simple, swearing by the nitro cold brew.

The Drake Eatery
Paying homage to the old Drake Hotel and Beer Parlour that was the first pub to open after Prohibition was lifted in Canada in 1954, The Drake Eatery opened in 2014 with a focus on the craft beers of Canada and a few Northwest standouts. Taps from spots like the local Swans Brewpub and eastern Canada’s Muskoka share space next to Oregon’s Pfriem and California-based Modern Times. “It’s the most well-curated menu in the city,” says Soole. “[Owners] Mike and Lee Spence have it down to a fine science here.” With pub-style counter service, the atmosphere is casual, while a sitting room filled with Victorian-style sofas maintains the parlor vibe.

Pagliacci’s
Originally opened in 1979 by brothers and Brooklyn natives David and Howie Siegel, Pagliacci’s quickly became a Victoria staple serving up big portions of New York-Italian-style pasta and even bigger slices of New York Cheesecake. Shawn Soole took over the bar program after a full kitchen renovation and new bar re-opened in early 2018, offering 15 wines on tap, two cocktails and a rotating selection of beer. “The cocktail menu mantra is high prep, quick service cocktails with a Solera barrel-aged Odd Society cocktail, a milk punch, winter sangria on tap and a carbonated bottle cocktail,” Soole says. “Overall, the renovations blend the longstanding tradition of Pagliacci’s with trends that reflect the future of this stalwart.”

Bodega
The newer sister location to longtime local favorite Tapa Bar, Spanish wine bar Bodega is Soole’s go-to spot at happy hour for pintxos and a glass of sherry. The bar’s list features around 20 varieties, and Bodega owner and general manager Emily Henderson also experiments with playful sherry cocktails like the Juan Burgundy, made with amontillado sherry, port, fresh lemon and simple syrup. “We garnish it with a strip of leather clipped to the glass and then mist the whole thing with Bowmore scotch,” says Henderson. “We thought it tasted like smoking a cigar in a mahogany leather chair in an old library, so we ran with it.”

Cafe Mexico
A Victoria institution, Cafe Mexico opened in 1985, was gutted by a fire in 2015, then rebuilt and reopened in 2016, much to the relief of dedicated patrons and agave fans. “This old-school Mexican joint has a world-class cocktail program,” Soole says. With a list of around 115 tequilas, mezcals and sotols, the cantina-style bar boasts one of the largest agave-spirit selections in Canada. The expansive list of original cocktails ranges from the boldly spirited, like the Barrel-Aged Tridente with blanco tequila, Cynar, fino sherry and peach bitters, to the bright and lively, like the Jalisco Bubbly Pop with blanco tequila, Aperol and Ancho Reyes in a Jarritos tamarind soda.