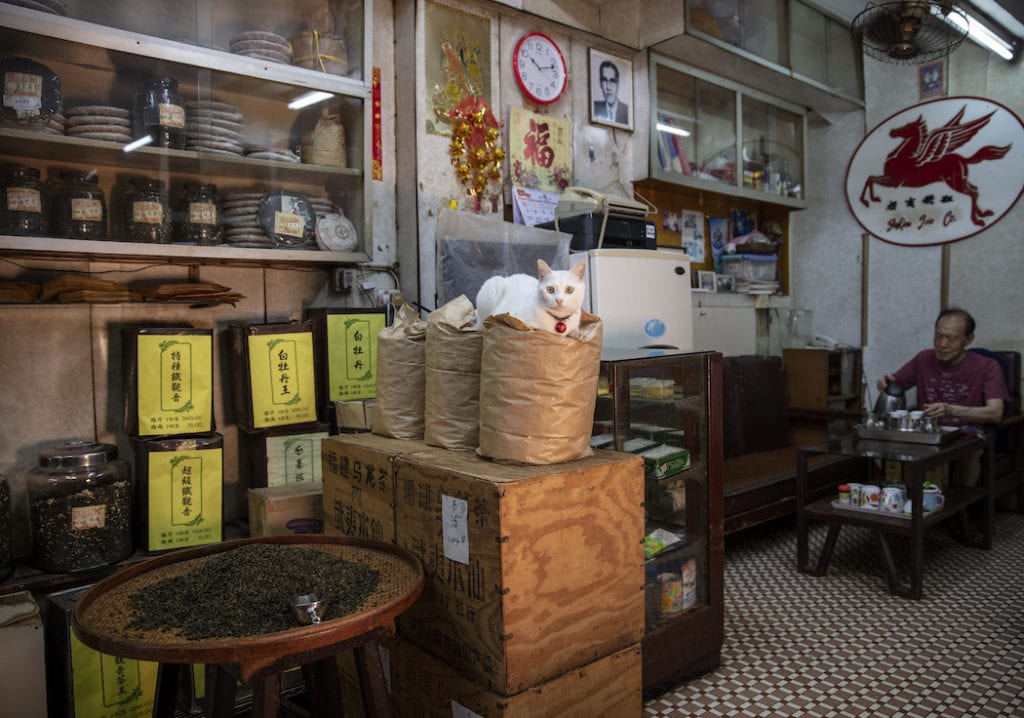 As integral a part of the economy as it is the daily routine of residents, tea in Hong Kong is both commodity and cultural touchstone. In our September/October 2018 issue, Max Falkowitz explores the tradition of tieguanyin in Hong Kong—intensely roasted teas that are highly prized even as the number of roasters dwindles. “I was there on assignment writing about dim sum, which meant drinking a lot of tea,” says Falkowitz. “Tea culture is Hong Kong culture. It’s essential to so many experiences of local life, in so many different forms, that it can give foreigners a deep appreciation for all the ways tea is woven into our past and present.” With myriad cultural threads contributing to Hong Kong’s tea scene, we chatted with Falkowitz about where and, more importantly how, to best explore the city’s offerings.

To say that tea is to drinkers in Hong Kong what coffee is to those in the U.S. is a grand oversimplification, though some similarities do exist. Like readily poured cups of coffee in American diners, the ever-present beverage in Hong Kong restaurants is tea. And this is a helpful thing to keep in mind when you begin exploring tea in Hong Kong. “I’d recommend starting where you can just experience the tea,” says Falkowitz. One of the easiest routes to immersion? Alongside a plate of dim sum.

From fine-dining restaurants to casual neighborhood spots, dim sum will always be accompanied by a pot of tea, or several, with a range of quality. In Hong Kong, bustling dim sum halls offer a glimpse into the ritual of tea as it applies to daily life. “Most people are drinking whatever tea the dim sum places have, and in some cases, the quality of the tea will inform their decision on where to go,” says Falkowitz. “Some people bring their own teas to drink, and they tend to be the people who care a little bit more. There was one woman I talked to who had been going to a dim sum hall for 30 years because they kept the water hot enough for her to brew her own tea.” 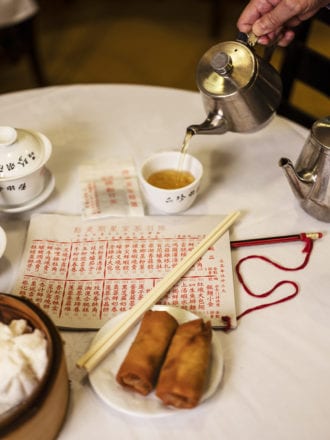 Tea being poured alongside dim sum at Luk Yu.

Falkowitz recommends Lock Cha, a vegetarian dim sum restaurant and teahouse in Hong Kong Park next door to the Museum of Tea Ware. The owner, Mr. Ip Wing-Chi, is a collector of a variety teas, though may be best known for his pu-erh, a variety of fermented tea from Yunnan Province. At Lock Cha, each table receives a kettle, allowing guests to brew cup after cup at their own pace. “The dim sum is fantastic and the tea menu is really broad. It’s not a guided tasting, but you’re allowed to just sit with the tea and drink through it, which I think can be more helpful in some ways for people who are not as familiar [with tea] because your experience is not being filtered through anyone’s sales pitch.”

Once you’re ready to explore beyond dim sum and into Hong Kong’s tea shops, it’s a good idea to figure out what you’re looking for and where you’re most likely to find it. “The tricky thing about Hong Kong is that it’s not just one tea culture there. It’s like, if you’re a beer drinker, you’re not going to go to a wine bar to drink beer,” says Falkowitz. “A pu-erh drinker is not going to go to an oolong roasting shop to drink pu-erh. You have to understand that there are a lot of different pathways to tea.”

This diversity stems from the broad cross-section of cultures that have come to call Hong Kong home over the centuries. When migrants from across Asia relocated to the territory they brought teas with them, such as floral greens from Shanghai and Beijing and darker, roasted oolongs from Guangdong and Fujian Provinces. And, of course, a century of British rule left its own footprint. “A lot of the American and European tourists who say they’re interested in tea [want] mostly British high tea, not the specialty stuff,” says Falkowitz.

Many shops located in the Kowloon area, Hong Kong’s northern mainland, cater more to local shoppers. “Some will only brew for you if you intend to buy, while other shops will charge you a small amount to taste teas,” says Falkowitz. “In Hong Kong, there is a lot of emphasis on efficiency and not wasting people’s time.” That said, some of the long-operating shops, such as Best Tea House, operated by tea master Vesper Chan since 1988, and the Fukien Tea Co. on Hong Kong island, can be more accessible to tourists with less pressure to buy.

When purchasing tea at a shop in Hong Kong, it’s customary to be poured several steepings of the tea, which offers an opportunity to learn more about what you’re drinking. “Be transparent about what you know and what you don’t know,” says Falkowitz. “Ask questions about the tea—the flavor, it’s origin. The more specific you can be, and the more willingness you show to learn, the better off you’ll be. When it comes to learning about tea, people are really generous with their time and their tea and their knowledge, but you have to show that you’re serious with your intentions.”

Some shop owners will happily chat about tea all day, such as Patrick Yeung, who owns the Fukien Tea Co. and has specialized in roasted oolongs from Fujian Province for almost 60 years. “Patrick will talk your ear off about oolong, and he has no pressure to sell,” says Falkowitz. But generally, it’s preferable to be clear about what level of quality you’re looking for and what your budget is. “Being transparent about what you’re willing to spend is very important and even expected. It’s okay to state up front whether you have a strong intention to buy or not.”

Also remember that in Hong Kong, quality tea does not come cheap. “A lot of people get sticker shock when they’re looking at specialty teas in Hong Kong, because they’re a lot higher than what you’d pay in America,” Falkowitz says. For example, a high-quality cake of pu-erh tea, might cost as much as $500. But if you break the cost down per cup, factoring in the number of steepings that come from a pressed cake, the cost is closer to $10 per use. “That’s less than the cost of a glass of wine at a nice wine bar,” Falkowitz adds. “The upfront cost is high, but compared to every other luxury beverage, tea is more affordable.”

Take a musical journey to one of the best cocktail bars in the CDMX.