The music industry and the bartending world might not be all that different, as Mo Herms discovered through hundreds of interviews over more than half a decade. A former radio DJ and a longtime consultant in the music business, Herms launched the podcast Music and Booze with Mo, chatting with bartenders and musicians both new and seasoned as they discuss life on stage and behind the stick. We sat down with Herms to talk about the through lines she’s found between the two worlds, which bartenders leave her starstruck, and what kind of music will be on her holiday party playlist. (Read her tips on how to create the ultimate holiday playlist here.)

Your background is in the music industry—have you ever worked in hospitality?

I’m the epitome of my podcast. I started in radio in the ’90s in the Bay Area and then left for Los Angeles and worked in a record store, got into music publishing, and started working more on the digital side. I worked for a cell phone company that was doing iPhone before iPhone, and I was creating radio stations that would only be available to people that had the phone. This was the mid-2000s, and when the iPhone launched we were like, “I guess we’re done.” But I continued in curation. I was creating playlists for bars and restaurants and gyms, and traveling all over the country doing that. Then I started doing consulting—a lot more behind-the-scenes work in terms of music recommendations and curation.

So I’m very deeply in the realm of digital music and digital music marketing now. But four years ago, I invested in a bar—The Mermaid in downtown LA. It’s one of the few female-owned-and-operated bars in all of LA County, and I’m so proud to be a part of that. So now I work in music and have a hand in hospitality. So I am my podcast.

What drew you into the world of cocktails and inspired the podcast?

I moved back and forth from LA to the Bay Area a couple times. On the second time back in the Bay, some of the real craft cocktail–type bars were opening up, and I was getting really into these good cocktails. At the same time, I was noticing that my musician friends were starting to age out; they realized they needed to pay the bills. They’d got married and had kids, and a lot of them made their way to hospitality and started working as bartenders.

So all these people who had been my musician friends were now my bartender friends. It was like seeing this movement, with these creative people putting their creativity into another place, and feeling that same kind of camaraderie being behind the bar with others, collaborating with others like they did in a band. They’re collaborating with other creatives to make cocktails and finding a sense of pride in that. It was really interesting to see this shift.

I have since found plenty of younger bartenders who are still active musicians because they like that flexible schedule. It’s fascinating to see how the two fields mesh so well together. I just keep finding people who play music and make drinks, and do it well and have a great time. And I missed my radio days. This way, I can still talk with people about music and booze. Everybody in hospitality has some aspect to them where they like talking to people, even if they hate people. And I’ve always loved talking to people and interviewing musicians. During my travels for work, I would sit at a bar and just talk to the bartender. So I actually found it very easy to start doing this podcast.

You’ve had so many conversations now with both musicians and bartenders; what sort of through lines have you seen emerge between the two worlds?

The band collaboration comparison is not something I came up with—it kept coming up when I would talk with people. They’d say being behind the bar is like being in a band, because you have to work with a team and know each other’s strengths and weaknesses. And that was something I knew very well—the band relationship in the music world. It’s like being married; you talk to musicians and it’s such a deep and intense relationship because they’re working together on a deep emotional level and putting themselves out there with their creativity. I don’t think it’s quite as deep behind the bar, but it’s still very strong—very much a family. That was interesting to learn. Also how musicians find that creating a cocktail is like writing a song; it’s just trying and trying until you get it right, and then it’s magic.

Do you have an episode that stands out as your favorite, or a conversation that was the most memorable?

I have a very good friend who’s a musician of note in the alternative/indie world, and he’s someone I’ve known for over 20 years, who I met as a musician, and then he started buying bars. And he’s now a very successful bar owner—I think it’s four bars in Los Angeles and two bars in New Orleans. His name is Greg Dulli; he fronts the band the Afghan Whigs. I thought, he’s got to be my first interview. When I asked him, he was totally down, but we didn’t even get around to it until last year, when he was my 100th episode.

It was so much fun, and for me it was also a fun way to showcase someone who’s been interviewed a million times, but to do something completely different with them. We talked about why he bought bars, and no one talks to him about that, and he’s very proud of it.

Brian Miller was another person who, when I interviewed him, it felt like a really great first date, and we became very good friends. Josh Davis, out of Chicago, is a super inspirational guy, and we had such a motivating chat. He just made me want to change the world, but he’s the one actually doing it. Lynnette Marrero I really loved talking to, and she’s definitely a rock star in this scene. But she actually started out trying to be a musical stage actress! I myself am a Broadway nerd, despite my indie rock cred, and we just dorked out over West Side Story. But I just loved meeting this person who’s done really incredible things for women in the industry. She wields her power wisely, and I respect that a lot.

Thinking back to your playlist curation days, how would you make the perfect holiday cocktail party playlist?

I was responsible for upwards of 75 holiday playlists for several years. For holiday entertaining, we had stuff of all stripes. You could have “crooner holidays”—that was probably one of the most popular ones, with the old-school classics. But for myself, I like to mix it up. If it’s my own party, I’m going to put some cocktail classics on there—you know, the Dean Martin and Julie London type things—but I’m also going to throw in some indie rock stuff because I love it, and also probably some electronic and some Latin music. That’s what my mix would be. If I’m doing it for my bar, I’m also gonna throw in ’90s hip-hop—there is great ’90s hip-hop holiday stuff, and that’s always really fun.

What drinks would you serve?

I’m really fortunate to know all these bartenders who share secret recipes (or not-so-secret recipes) with me. At our bar, The Mermaid, we serve a Cold Buttered Rum. We make a buttered fat wash on the rum we use. There’s a legendary bar out here called the Tiki-Ti, and every year for one week they serve a Hot Buttered Rum. But for special patrons, of which I am one, they will give you the batter, so I can serve that at home. And then a good girlfriend of mine, Marie King, is the beverage director at the Tonga Hut. She has a delicious Coquito that she also gave me the recipe for. So my holiday party would be those Coquitos, and a Hot and Cold Buttered Rum. And if we’re feeling frivolous, maybe a hot chocolate with green Chartreuse in it. It’s the holidays: You’re supposed to be indulging!

Embrace the unexpected for this year's holiday playlists. 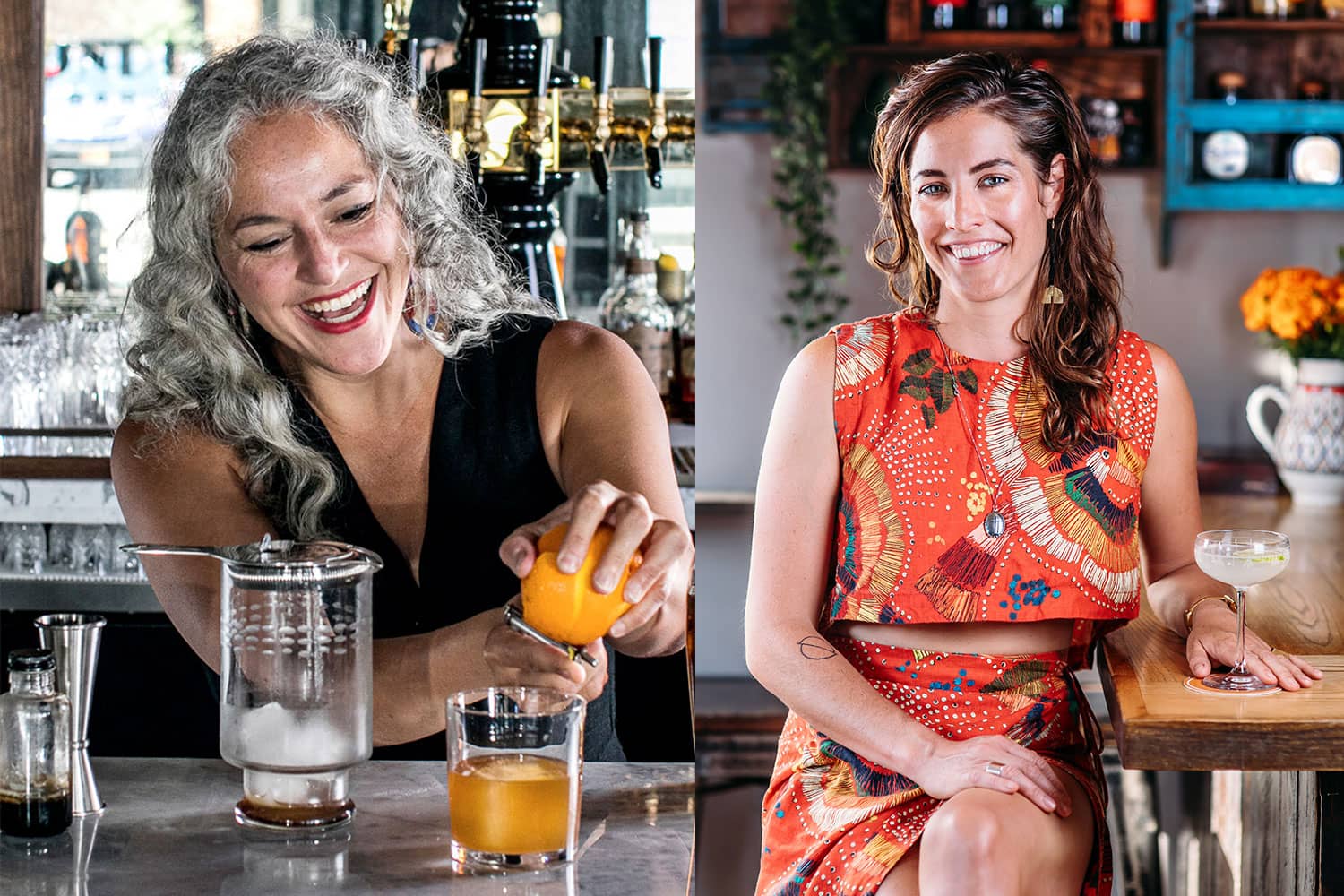 The founders of Speed Rack talk about their signature women's bartending competition. 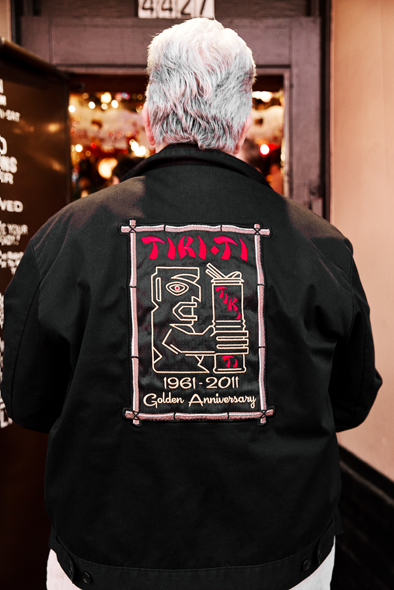 From Don the Beachcomber to Tiki-Ti, Jeff Beachbum Berry and Martin Cate talk about the Los Angeles bars that created and defined tiki.