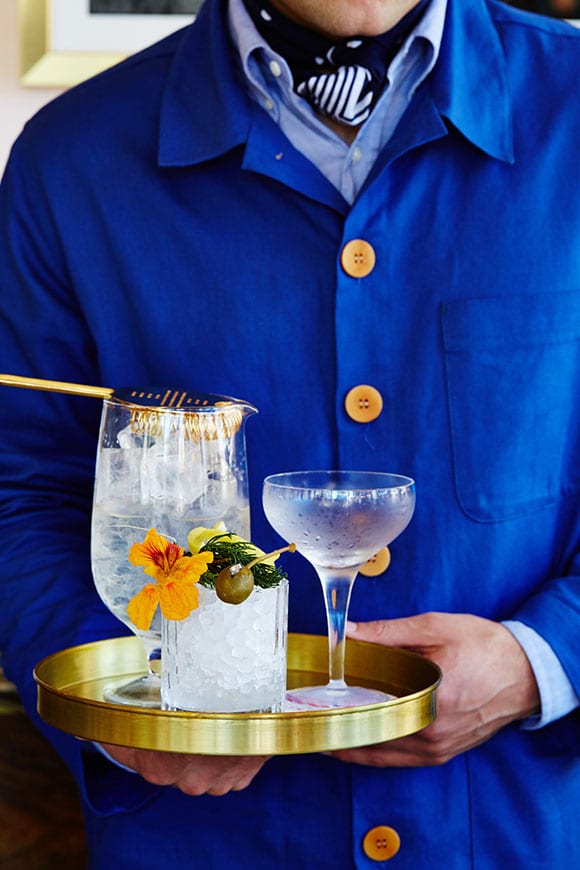 The Martini is one of those classic cocktails known for its dogmatic fan base—everyone has their preferred proportions, and many will insist there’s a right and wrong way to make one. But flavor is highly subjective—and the most important palate to please is your own. Riffs on the classic recipe are easy to find if you look in the right places. Bars like Slowly Shirley in New York and Whitechapel and Interval at Long Now in San Francisco have dedicated sections of their menus to subtle variations of the drink. Following are some ideas from the barkeeps behind these programs that’ll help inspire you to rethink your next round of Martinis.

Switch up the styles.
The classic Martini recipe is simple, but tiny tweaks in ingredients can yield big changes. For example, try swapping London dry gin for genever, Old Tom instead or a New Western gin. Tired of orange bitters? Sub in celery bitters for a more savory element or lavender for a floral edge. On the vermouth side, Dolin Dry will taste slightly different than Carpano’s version, or take notes from Will Elliott at Sauvage and replace vermouth entirely with Chinato. At Interval at Long Now, beverage director Jennifer Colliau takes a similar approach with the Fifty-Fifty by splitting the base between dry and blanc vermouths. The move creates a “dryer, yet highly aromatic” blend, she says. “All the new vermouths on the market make it very easy to tweak the recipe to something you’ll enjoy drinking.”

Find different ways to incorporate flavors.
Infusions are a great way to change the nature of a Martini without straying too far from the classic. When bartender Naren Young worked at Saxon and Parole (you can find him at Dante these days), he created an elevated Dirty Martini called the Olive 7 Ways, a combination of olive distillate, olive bitters, olive shrub and olive-infused vermouth. In the same vein, at Interval Colliau grinds black olives, salt and vermouth in a blender, then filters the mixture through a coffee filter to create a clear, clean “infused” vermouth. “We get a great concentration of flavor this way, more so than just by infusing,” she says.

Play with mouthfeel.
Olives have long been used to garnish Martinis, but olive oil is also finding a home in the drink itself. At Monteverde in Chicago, bar manager Justin Kaderabek uses an olive oil-washed gin in the Vespa, a modern take on the classic Vesper. “The wash adds a velvety texture to the drink,” he says. “It also tones downed some of the gin’s botanicals and highlights the olive oil really well.” Kaderabek uses a peppery Sardinia olive oil that complements the Lillet Blanc. To add aroma and enhance the olive oil flavors further, he uses a few drops of olive oil and Castelvetrano olive on a pick as garnish.” At Forequarter in Madison, Wisconsin, oil-washed vodka achieves a similar effect in the Olive-Oil Washed Martini.

Tweak the proportions.
One of the most classic examples of tweaking proportions is the Reverse Martini, in which vermouth dominates the blend, but the options are endless. “The original Martinez was equal parts gin and sweet vermouth, but I find that too sweet, so I do two parts gin to one part vermouth,” Colliau says. “Does that make it any less a Martinez? I don’t think so. It still has a barspoon of maraschino and a dash of orange bitters, but for me it tastes better.”

Consider the rest of the family.
Ever heard of a Ford Cocktail, Turf Cocktail or Tuxedo? Each one—and so many more—is considered part of the Martini “family tree,” early recipes that closely resemble the original but feature subtle changes. Bars like Whitechapel in San Francisco have an entire section of the menu dedicated to the topic, and at Slowly Shirley in New York, owner Jim Kearns has a similar menu of Martini variations. “A Martini becomes a very different thing if you stick an onion in it instead of an olive and call it a Gibson,” he says. In the case of the Gibson Kearns makes at Happiest Hour, onion brine enters the mix, and a split base of dry vermouth with blanc vermouth and make it “kind of a perfect, slightly dirty Gibson,” he says. “The base set of ingredients [for the Martini] is so minimal that as soon as you introduce a variable of any sort it almost by default does become a different cocktail.”