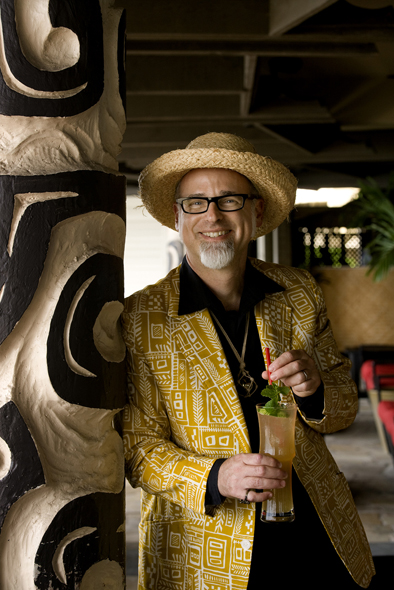 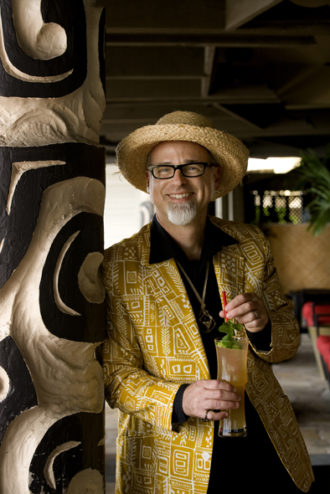 Jeff “Beachbum” Berry is the veritable godfather of the modern tiki revivial. We asked him to share his five favorite anecdotes from tiki history—a tall order for someone who no doubt knows hundreds of such stories, most of which he’s included in his latest book, Potions of the Caribbean. In the meantime, here are the Beach Bum’s personal favorites.

1) In his book Name Dropping, author Barnaby Conrad recalled the day in the 1960s when Victor Jules “Trader Vic” Bergeron—the inventor of the Mai Tai—hired him to ghost-write his autobiography. Vic had become a famous tiki restaurateur by presenting himself as a seafaring roustabout “Trader” who sailed the South Seas discovering exotic drinks and dishes. In reality he hated boats and didn’t travel to Polynesia until he was in his mid-sixties. “I went to Tahiti last year for the first time,” he told Conrad, “and I hated the goddam place! Here all these years I’ve been promoting South Seas cuisine and South Seas products, and I go there and see it for myself, and it rains all the time and the girls have bad teeth and the food is crummy and I can’t wait to leave. It’s the pits. It’s a boil on the ass of creation that place, I’ll tell ya!”

2) Don the Beachcomber invented the tiki bar after Prohibition, where he also invented his most famous drink, the Zombie. Legend has it that he whipped it up one day to help a hung-over customer get through an important business meeting. When Don later asked how the hangover cure worked, the customer said, “I felt like the living dead–dit made a zombie out of me.”

3) In the late 1950s, Harry Yee was the head bartender at the Hawaiian Village Resort, where he invented the Blue Hawaii cocktail. He also was the first to garnish tropical drinks with the paper parasols and Vanda orchids that we associate them with today. “You know why?” Yee asked journalist Rick Carroll 35 years later. “We used to use a sugar cane stick, and people would chew on the stick, then put it in the ashtray. When the ashes and cane stuck together it made a real mess so I put the orchids in the drink to make the ashtrays easier to clean. I wasn’t thinking about romance.”

4) Joe Scialom, who invented the Tropical Itch cocktail, spent his summers in early 1950s as the personal bartender of Egypt’s King Farouk, who summered at the at the Royal Danieli Hotel in Venice. There Farouk spent millions on lavish parties, drinking Joe’s cocktails from 18-carat gold goblets. “After the king got drunk he would throw all the golden goblets he drank from into the canal,” Joe’s grandson Dylan told me. “One year my grandfather thought of a plan to save all that gold. Since the canal wasn’t very wide, he hid a net under the water and attached it to both sides.” After Farouk hurled all the goblets into the canal and called it a night, “my grandfather and the crew of the Danieli would lift up the net and haul them in.”

5) As a kid taken to Polynesian restaurants, I watched adults ordering these amazing-looking exotic cocktails served with ice cones molded around straws, fancifully garnished with flaming lime shells.  But by the time I was old enough to order one, all the places that served them were disappearing.  So I was excited to discover a perfectly preserved mid-century tiki bar in the wilds of Van Nuys, California, in the late 1980s. There was an Easter Island carving out front, a running waterfall inside, and lots of thatch and bamboo.  But everybody in the place was drinking Budweiser, and the jukebox was blasting Black Oak Arkansas.  I asked the bartender, who was wearing a Guns N’ Roses T-shirt, if she knew how to make a Mai Tai.  “Sure,” she said.  “What’s in it?”  I told her, ending the list of ingredients with “the juice of one lime.”  Before I could stop her, she threw a whole lime — intact, uncut, rind and all — into the blender and switched it on.   Not wanting to appear ungrateful, I drank the whole thing. That’s the moment when I decided to write The Grog Log, my first book about how to make vintage tropical drinks.

Miranda Rake
Miranda Rake writes (mostly about food, drinks, and motherhood) for myriad publications from her little desk at home in Portland, Oregon. Though mostly a black coffee/water/beer person (in that order), she has never turned down an excuse to pop a really good bottle of Champagne.