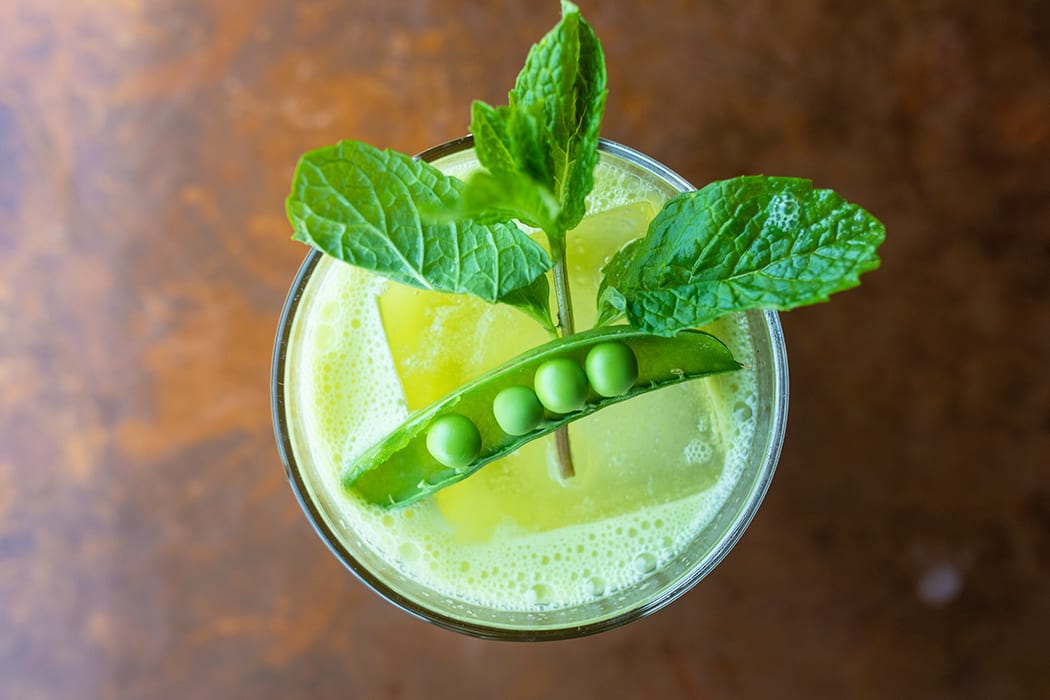 When it comes to the citrus component of cocktails, lemon, lime, grapefruit and orange are the typical go-tos, but many bartenders are increasingly reaching for yuzu, a citrus fruit that looks like a large lumpy lemon and tastes like a mix between an orange, lemon, lime and mandarin. Commonly cultivated in Japan, China and Korea, the fruit is a staple in cuisines from those regions, adding a distinctive pop of acidity to both food and drinks.

“What makes yuzu so great in cocktails is its versatility and how it plays well with so many ingredients,” says Alex Zeichner of Cafe Birdie in Los Angeles. “Yuzu juice can tie in the ingredients of a complex cocktail and help balance the drink, or it can be used as an agent to bolden a cocktail. I mainly use yuzu in addition to another citrus to create an extra dimension that brings the cocktail to life.”

In the Garden Party cocktail, Zeichner uses aquavit as a savory base for mint and snap peas, which all gets brightened by a pop of yuzu. Yuzu also stars in Zeichner’s Sunkissed Sky (mezcal, blood orange-hibiscus cordial, tamarind, lime and yuzu) and the Cap’s Dream with tequila, amaro, red bell pepper juice, lime, yuzu, agave nectar and cardamom bitters. “What I like most about the taste is the brightness that fills your palate,” he says. “It’s tart, fruity, bold, and bright—those traits transfer really well into a drink and that’s why I love this ingredient so much.”

“Yuzu adds sweetness and acidity without being overly tart,” adds Simone Goldberg of NO BAR at The Standard East Village hotel in New York. “It also acts as an emulsifier, which adds a lovely texture to cocktails that cannot be mimicked by other citrus.” It works especially well with gin, Goldberg says, because it adds an earthy backbone for botanicals to bounce off. She pairs the two in the Ramble cocktail, which combines gin, blackberries, cinnamon syrup and yuzu juice. “The yuzu flavor complements the gin and allows the cinnamon to shine in a way that isn’t overtly ‘fall spice,’ ” she says.

Meanwhile, in the Highland Picnic from Ghost Donkey in New York, yuzu meets mezcal and reposado tequila, and at Grain Whiskey Bar in Los Angeles, lead bartender Taylor Hall created a cocktail called Pepper, Oak, and Yuzu that features bourbon, lemongrass pink peppercorn syrup, yuzu juice, yuzu liqueur and lemon. “I like yuzu in cocktails because it has a beautiful aromatic quality that people find intriguing before it even touches their lips,” Hall says, adding that the citrus also pairs well with spicy peppers, ginger and buttery flavors like bourbon and aged rum.

At George Washington Bar at the Freehand Hotel in New York, bartender Matt Merkin employs yuzu in his version of a White Negroni called the Alpine Start. With gin, Amaro Nonino, oloroso sherry, Strega, honey, orange bitters and absinthe, head bartender Tristan Brunel says the yuzu “brings a brightness and levity to an otherwise formidable and and slightly spicy cocktail stirred and served up.”

And its not juice yuzu juice that’s finding a home in cocktails. In the Saké Mojito from Tokyo Record Bar, a yuzu saké from Joto and a sparkling yuzu saké called Banzai Bunny add a double dose of yuzu flavor to a base of junmai ginjo saké and muddled shiso leaf. And in the LP Limonana from Galit in Chicago, a yuzu tonic from East Imperial adds extra dimension to an alcohol-free mix of mint and lemon. Also in Chicago at rooftop bar J. Parker, the same tonic water is used in a vodka- and blackberry-based Snake Island cocktail. “If it was just yuzu on its own, we’d have to add another bitter component into the cocktail in order to achieve balance,” says J. Parker’s beverage director and assistant general manager Jonathan Kahn. “The quinine from the tonic provides the perfect amount of bitterness to bring it all together.”