The Virtues of Cynar 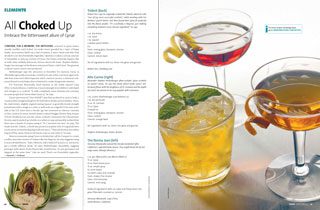 Consider, for a moment, the artichoke: armored in spiny leaves, usually inedible until boiled, its tender heart guarded by a layer of fuzzy thistle. As Jonathan Swift once said of oysters, it was a brave soul who first decided to eat this formidable vegetable. Likewise, it takes a certain amount of intrepidity to pick up a bottle of Cynar, the Italian artichoke liqueur. But as with other unlikely delicacies, fortune favors the brave. Stephen Shellenberger, bar manager at the Boston restaurant Dante, calls Cynar “the greatest cocktail-centric amaro ever produced.”

Shellenberger says the attraction is threefold: For starters, Cynar is affordable (generally around $20 a bottle); it’s also softer and more approachable than some more bitter liqueurs; and it contains cynarin, a chemical compound found in artichokes that is believed to make things taste sweeter.

For Vincenzo Marianella, head barman at the newly opened Copa D’Oro in Santa Monica, California, Cynar’s strength is its ability to add depth and intrigue to a cocktail. “It adds complexity, some dryness and curiosity, because people don’t know what Cynar is,” he says.

Cynar (pronounced “chee-NAHR”) was first produced in 1949 in Italy, a country with a longstanding love for both bitter drinks and artichokes. There, the dark brown, slightly vegetal-tasting liqueur is generally drunk straight (sometimes with a single ice cube) or with soda as a digestif. It became available in the U.S. more than a decade ago but remained an obscure curiosity in this country for years. Seattle-based cocktail blogger Robert Hess, keeper of both Drinkboy.com and the online cocktail community the Chaunticleer Society, says he picked up a bottle on a whim in 1999 and quickly realized that there was a dearth of recipes using it. “So I invented my own,” he says. The result was the Trident, a drink that proved so popular that it’s regularly been on the menu at Seattle’s Zig Zag Café ever since. “They tell me that even when it goes off the menu, those in the know come in and order it,” he says.

Hess recommends using Cynar in drinks that call for Campari to create a softer, smoother version of classics like the Negroni. He also suggests using it as you would bitters. “Take a Martini, add a dash [of Cynar] to it, and you’ve got a totally different drink,” he says. Shellenberger, meanwhile, suggests pairing it with sweet, fruity flavors like strawberries, “so you get kissed and slapped at the same time.” Like we said: That’s one formidable vegetable.