The Evolution of Arcade Bars 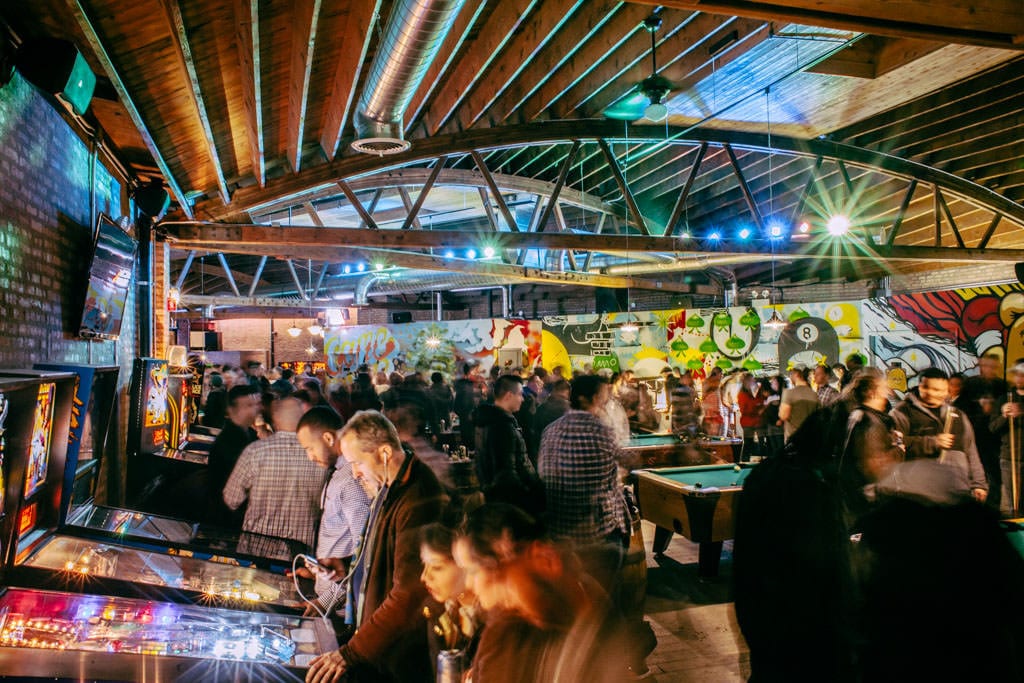 The sounds are unmistakable—the plink of points earned, the chaotic 8-bit soundtracks, and the disappointing diminuendo that signals you’ve just died. The golden age of the arcade may have been in the early ’80s, but as dedicated gamers grew up and bar culture evolved, a new type of drinking establishment emerged: the barcade. “I wanted to recreate the feel of arcades back in the ’80s—lots of games and just crowded with people playing shoulder to shoulder,” says Jeffrey McEachin, CEO and co-founder of Ground Kontrol in Portland, Oregon.

Operating for nearly two decades now, Ground Kontrol is one of the country’s original bar-arcade hybrids. To be accurate, their original location was a straight-up arcade—too cramped to accommodate anything but games. When they moved to their current location in Portland’s Old Town in 2004, the bar was added and popularity swelled. “I’d say we’re definitely an arcade first, but we’re also a full bar,” says McEachin. “We have 20 taps and a menu of specialty cocktails that are video-game themed. The Princess Peach cocktail is always popular.”

McEachin didn’t pull the idea out of thin air, though. Bars were some of the original testing grounds for new arcade games, utilizing an already captive audience to see how many quarters a machine could earn. In 1971, Atari founder Nolan Bushnell installed his first cabinet game, Computer Space, in the Dutch Goose, a bar near Stanford University. Goldie’s on 45th, a now-defunct sports bar in Seattle’s University District, was one of two American bars to receive a test console of Donkey Kong from Nintendo before its official release in 1981 when the game swiftly became one of the most popular in the country. “Goldie’s was the original bar arcade. They were an inspiration for us,” says McEachin. “We don’t claim to have invented the concept; we’re just trying to perfect it.”

They’re not the only ones. On the opposite coast, four buddies in Brooklyn pooled their resources to open a bar dedicated to vintage arcade games and craft beer in 2004. They called their spot Barcade—a name they trademarked in 2007—and they now operate seven locations across New York, New Jersey, Pennsylvania and Connecticut. The business model has proved its worth, with arcade-bar hybrids planting roots in cities all over the country, including Washington, DC, Indianapolis, Austin, Detroit and Los Angeles. New versions are slated for a 2018 debut in cities including Tucson, San Jose, Norfolk and Las Vegas.

At Emporium, a string of arcade bars in Chicago (plus one in San Francisco) founded in 2012, owners approach the business with a “bar first” mentality, with a rotating selection of dozens of craft beers on draft and in cans and bottles, plus an extensive whiskey selection. But they’ve also broadened the arcade concept, with plenty of larger format games like air hockey and foosball, that encourage interaction. “The appeal was initially based in nostalgia for a lot of the folks who visited our bar,” says Jared Saul, Emporium’s director of development, pop-ups and beer. “Now that we’ve been at it for six years and have been fortunate to expand to include different locations [and] different styles of gaming, live music and other programming, I think that the enduring appeal for Emporium is definitely more community based.”

“Being nerdy is cool again!” says Mitchell Turino. He’s getting ready to open his own arcade bar—the first in Madison, Wisconsin—this summer, dubbed I/O in reference to the input-output interface between humans and electronics. “I think a lot of people in their 20s and 30s are just starting to get used to this adulting thing, and they feel nostalgic for a time without bills, jobs and political strife,” muses Turino. “The gaming community has always been around, but in the last decade it’s become easier to stay at home and play online rather than get people together. But when you combine that nostalgia with the desire for more social interaction, the arcade bar concept is right there in the middle.”

Nostalgia alone can only carry a concept so far, especially when targeting a niche from a specific era. So when the draw becomes social interaction as opposed to specific activities, arcade bars can bridge the gap and start to pull in new audiences and even non-gamers. “Now that younger generations are coming into the bars who maybe didn’t get to experience the old-school arcades of the ’80s and ’90s, we’re seeing them discover something old that is essentially ‘new’ to them,” Saul says.

At the end of June, Ground Kontrol opened the doors on an expansion that doubled their footprint to 7,000 square feet, and that includes more than 100 arcade cabinets, 40 pinball machines and, yup, a second bar. “I’ve always been worried about the kids growing up today who didn’t necessarily grow up playing the older games—what’s going to happen when they’re adults?” says McEachin. “But so far it still continues to be popular. I think a lot of it is that the games are so approachable; they’re designed to be easy to understand but difficult to master, so that’s how they suck you in and make you want to play again and again.”