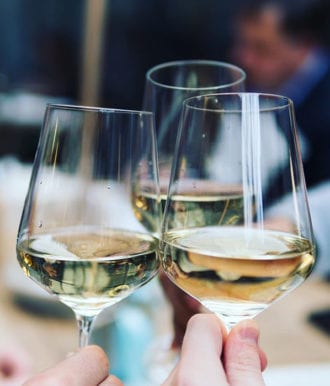 Though the precise origins of the Albariño grape are debated, the wine’s cultural home is the Rías Baixas region in Galicia, Spain. There, Albariño comprises 90 percent of all plantings, producing wine that’s long lingered in the global market as an inexpensive accompaniment to seafood. But more recently, Spanish producers investing in the wine’s potential have elevated Albariño, making zesty wines with graceful salinity, while wineries from Washington to California are likewise adopting the varietal. Here are six bottles to check out this season.

Atalier by Raúl Pérez Nanclares y Prieto ‘A Cruz Das Ánimas’ ‘Dandelion’ Albariño 2018 Raúl Pérez is among Spain’s most famous producers of Albariño. A new project for Pérez, Atalier pulls from two parcels of vines in Val do Salnés’ Cambados area harvested late in the season. Aged in French oak foudres, this striking wine is replete with wet-stone aromatics and is soft and round in the mouth, with the suggestion of sweetness balanced by lemony acidity and hints of the sea. $21.93, saratogawine.com

Bodegas del Palacio de Fefiñanes ‘Albariño de Fefiñanes’ 2018 The first vintage of this flagship wine from Palacio de Fefiñanes was produced in 1928 and bore a label designed by Spanish jeweler Enrique Mayer. Ninety-two years later, the wine carries that same label and remains a showstopper in the glass—dry and resplendent with crisp green apple, and possessing of a buttery mouthfeel. $22.96, astorwines.com

Do Ferreiro Albariño Cepas Vellas 2017 Though the Do Ferreiro winery was founded in 1973, they source from 200-year-old organically farmed vines in Rías Baixas’ ocean-adjacent Val do Salnés for their Cepas Vellas (“old vines”) Albariño. Aged 11 months on the lees, the full-bodied wine is fantastically bright, with a tart bite and a savory quality that lends richness and depth. $29.99, unionsquarewines.com

Granbazán Albariño ‘Etiqueta Verde’ 2018 This lively offering from Granbazán is a prime example of the Albariño style. Made of hand-harvested, estate-grown grapes from the coolest of the five Rías Baixas subregions, ‘Etiqueta Verde’ is vibrant with the scent of green apple and flowers, and a zippy citrus flavor. $18.95, sothebyswine.com

Nanclares y Prieto ‘Dandelion’ Albariño Alberto Nanclares came to grape growing late in life after a career as an economist. Near the historic Rías Baixas village of Cambados, Nanclares and his wife, Silvia Prieto, built a reputation for wines infused with the character of the ocean. Made from fruit from multiple plots planted primarily in sandy soil surrounding Cambados, this Albariño has a briny base that fades into stone fruit. $21.98, noevalleywineandspirits.com