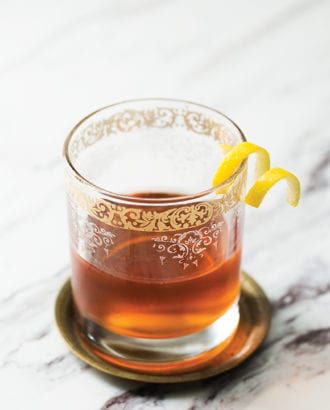 Some years ago I walked into a newly opened, high-end cocktail bar in Bangkok. I was feeling a little homesick, so I ordered a Sazerac. The Thai bartender regarded me silently for a few moments and then slowly nodded his head. “Ah,” he said, knowingly. “New Orleans.”

No cocktail is more associated with a city than the Sazerac. (Even the eponymous Manhattan has long since been abducted and claimed by the world). Yet there’s possibly no name with a more sprawling and confusing nomenclature.

There’s Sazerac-de-Forge et fils, of Limoges, France, the original 19th century Old World company that exported its brandy to the New World. It was popular in New Orleans during the waning days of French Creole culture, and at some point it made the acquaintance of absinthe and sugar and Peychaud’s Bitters, resulting in the Sazerac cocktail. It eventually became the name of a major New Orleans–based corporation (which still makes Peychaud’s bitters, not to mention the entire Buffalo Trace line of whiskey). The name today adorns the 1940s-era Sazerac Bar in the city’s Roosevelt Hotel, which pays the Sazerac Company a licensing fee for the honor.

All these threads connect at one place: the Sazerac House, possibly the city’s best-known drinking establishment in the late 19th century, and arguably the social center of drink, business and merriment.

The Sazerac House’s exact history is stubbornly elusive. But research by author and attorney Philip Greene and others suggests that it first appeared in 1853 on Royal St., very near where the Hotel Monteleone stands today. It was then called Sazerac Coffee House, although the fact that it was named after a popular brandy suggests that coffee was not its most prominent beverage. New Orleanians considered themselves too refined for saloons, so they referred to their tippling establishments as “coffee houses”—of which there were more than 200 listed in the city directory in 1859.

A proto-Sazerac cocktail may have surfaced here, but more likely it was first compounded some years earlier at a nearby pharmacy, where Antoine Amédée Peychaud produced his proprietary bitters, possibly as early as the 1830s. By 1857, Peychaud saw fit to take out an ad to tout his product’s availability at “the Sazerac House and other principal Coffee-Houses in this city.” Peychaud’s Bitters’ “agreeable taste is not the least of its recommendations,” he noted, claiming it also made a good restorative tonic for “cases of general debility.”

In a city crowded with coffeehouses, the Sazerac shone brightest, gaining added luster under the ownership of Thomas Handy starting in 1871. He dropped the “coffee” from the name, and over time it came to define haute New Orleans drinking.

At the Sazerac House, The New York Times reported shortly after its demise, “one might see at any time a Judge, the Mayor of the City, perchance the Governor himself, and certainly a score of lesser dignitaries.” Eavesdroppers would be rewarded with a panoply of topics, from horse races to the peccadilloes of politicians to the prices of cotton and sugar futures, which were traded along the bar. “One went to the bar for arbitration and planning,” the Times reporter wrote. “Foot on rail, one discussed weighty matters while waiting for the cocktail to appear.”

Local plenipotentiaries, playing cards at the private clubs that cluttered Canal St., would take breaks from the heat and wander to the Sazerac House for a cooling libation, leaving their cards face down on the felt until their return. Games of chance occurred in the barroom itself, with the betting stakes often left in the safekeeping of the manager, who worked with his door ajar to monitor the proceedings.

The drinks were also suited to the seriousness of business and card sports. The reporter claimed, although without evidence, that the art of shaking a cocktail was first introduced nationally here (“not for them the perfunctory tossing of the New York cocktail”), and that even “stirring was a public performance.” The difference between the drinks here and those served elsewhere was that “between a hand-carved piece of furniture and a Grand Rapids product.”

And somewhere amid all this, a cocktail made of brandy or rye or both, and fortified with absinthe, became the house drink, taking the name of the establishment where it was most commonly sipped. When exactly this occurred is uncertain, but it’s of note that by 1903 the Washington Post was claiming it was as famous as the Mint Julep, and commenting upon the “spectacle of the immortal Sazerac.”

The Sazerac, of course, remains one of the finest cocktails enshrined in the canon of classic drinks, and its spread beyond New Orleans in the past decade is only to be applauded. And while the place where it got its name and fame is gone—it was demolished, and today the site is occupied by a Walgreens Drug Store—the glory days live on in a slightly tapered, faceted glass misted with absinthe.

“Even the name is but a memory,” lamented that New York Times report in 1925, during the dreary depths of Prohibition. But in truth it lives on in liquid form, and with every sip you can sense a locale that was golden without being gilded, a tribute to a complicated past.