Remembering the Costs of Prohibition on its 100th Anniversary 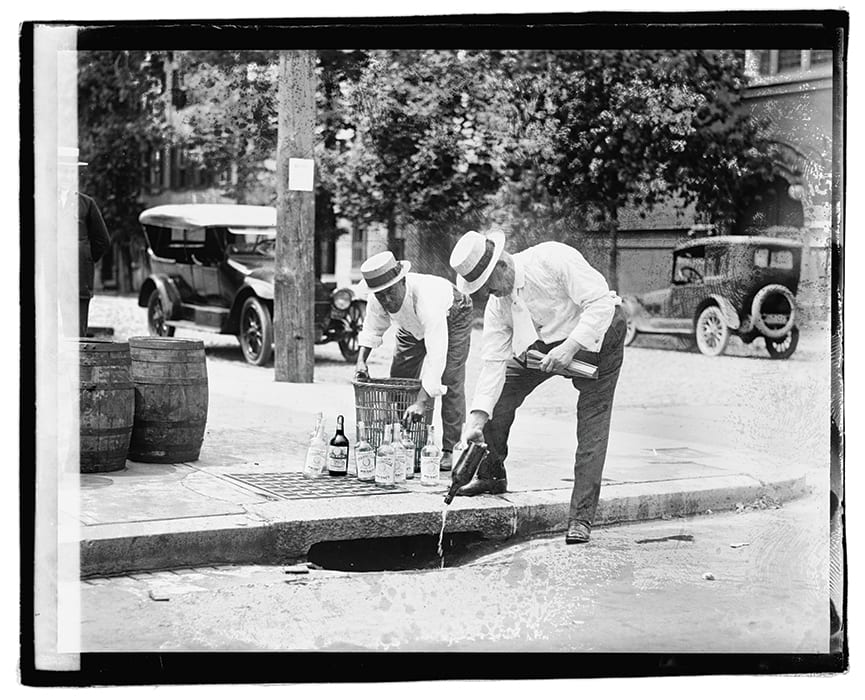 I can’t do that because on January 17, 1920, the Eighteenth Amendment, prohibiting “the manufacture, sale, or transportation of intoxicating liquors within … for beverage purposes,” officially went into effect. Like every saloonkeeper in America, the proprietors of those three establishments had to choose whether to close their doors or to assume the risks that came with running a criminal enterprise. They closed, and a great many others along with them.

Sure, some of the old-time saloons had been very bad. “Hinky Dink” Kenna’s in Chicago used its back room to round up bums and shape them up to vote. Jimmy the Priest’s in New York fatally poisoned four of its customers with methanol-tainted whiskey. Prostitution was on full public display at the Pig Ankle in New Orleans. Read just about any history of Prohibition (W.J. Rorabaugh’s excellent 2018 Prohibition: A Concise History is a good place to start) and you’ll learn all about the evils of the saloon.

I want to talk about the dark, majestic old places—the ones that were all hand-rubbed mahogany and polished brass; cut-glass decanters and cruets of mint. I want to talk about the saloons that closed at a reasonable hour, refused to sell drinks to minors, and made sure that the liquors they sold were unadulterated. The ones that were presided over by men, and occasionally women, of substance; dignified, respected professionals who practiced a trade as honest as any, and more honest than many, that the Prohibitionists held up as examples.

After more than a century of evolution, the American saloon had matured into something as characteristic and flexible as the English pub or the French and Italian café—a place where men and women (by 1900, back rooms that allowed women were common, and women even were beginning to move into the male sanctuary of the bar itself) could congregate to drink, eat, and find community in a rapidly changing and often alienating world. In any case, American voters were unwilling to do away with the saloon if it meant losing the many good ones in order to get rid of the few bad ones; in the 1892 presidential election, the Prohibition Party got a mere 2.25 percent of the vote, its best showing ever.

But then the Anti-Saloon League took charge of the movement. Wayne Wheeler, the Ohio lawyer at its head, knew that the way to get an unpopular policy passed is to scare people into it, and the best way to scare a whole lot of Americans is to say things like, “Alien illiterates rule our cities today; the saloon is their palace; the toddy stick their scepter” (as Frances Willard of the Women’s Christian Temperance Union had pronounced in 1890). The ASL took this anti-immigrant rhetoric and used it to drive a wedge between “the plain, church-going people of the towns and the countryside,” as one Prohibitionist defined his constituency, and the sort of people you’d find in a big-city saloon: Germans, Irish, Italians—immigrants and their children and grandchildren. African Americans. Catholics. Those people. “Degenerates,” as the Prohibitionists labeled them. (The KKK, it’s worth noting, was ardently Prohibitionist.)

And this is where I get really mad—pig-biting mad. Because just as our bars are finally shaking off the part of Prohibition’s legacy that killed civilized drinking, we’re plunged into a repeat of something far worse, the vicious, cynical nativism that Wheeler and his allies used to convince voters to support something truly un-American.

Prohibition, of course, turned out to be a parade of corruption, greed, and hypocrisy, punctuated with violence. Once everyone got thoroughly sick of that, it took only months to repeal. The bars came back, eventually, and we now look at that era as an odd tangent in the long arc of history. If we can get through that, then maybe we can get through anything.