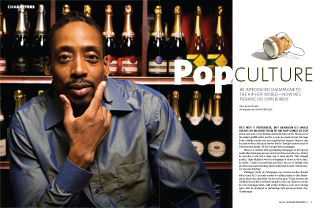 He’s not a performer, but Branson B.’s name shows up in more than 50 hip-hop songs by top artists such as LL Cool J, Redman and the Notorious B.I.G.. He was one of the earliest graffiti artists, and for 20 years he owned and ran the Sugar Bowl, a Harlem candy store and neighborhood hangout. Branson says his main virtue in the music biz was that he “brought common sense to entertainment people.” He also brought them champagne.

Branson is credited with popularizing champagne in the hip-hop world, after developing his own taste for it at the end of the ’70s. At first, he concedes, it was just a classy way to enjoy alcohol. That changed quickly. “Piper-Heidsieck was the champagne of choice in those days,” he recalls. “I drank it consistently, and then I went on to identify other products and started deciding what I really liked instead of what everyone else was drinking.”

Taittinger Comte de Champagne rosé became another favorite after he and B.I.G. (an early convert to bubbly) shared a 6-liter Methusalem, which they christened “the food of the gods.” Today, however, the bubbly he’d most like to introduce people to is his own. Branson now has his own champagne label—with a blanc de blancs, a rosé and a vintage wine—that he developed in partnership with grower-producer Guy-Charlemagne.

His timing is good. Many in the hip-hop community are looking for a new brand to support now that Cristal has fallen from favor in that crowd (last year, Roederer’s managing director infamously speculated that the link between Cristal and hip-hop might not be the best thing for the brand. Boycotts followed). Branson’s moderately priced wines ($40–$65 retail) are not out for the same luxury market, and while he says that Cristal “is a nice item” but “not as classy as people thought it was,” he refrains from addressing the social implications of Roederer’s inference.

Branson is low-key—even humble—about his passion for champagne. As for his influence on what the hip-hop community drinks, he chalks it up to a gentle enthusiasm. “When I found something that was really to my liking, I shared that with all my friends,” he says. “I would be the guy who would come to the recording studio with a bottle or two, and we would enjoy that while the artists were doing their creative thing.” Not one to indulge in winespeak, he’d rather pour friends a glass and let them reach their own conclusions. But when Vanessa Treviño-Boyd, beverage director at Manhattan’s Megu restaurants, first met him, she understood immediately how he could have lit the fuse of hip-hop’s champagne craze. “I think his generosity and open-mindedness led him to do something he didn’t even plan on—introducing this mystery-in-a-bottle to friends, friends of friends, and so on. It’s hard for the bug not to spread after that kind of introduction.”

In the early ’90s, as various rappers began making their champagne preferences a matter of public record, Branson’s knowledge of the wine was going deeper. He credits J.R. Battipaglia and Peter Nolis at Garnet Wines in Manhattan with helping him discover smaller, more boutique champagne houses. Battipaglia says that when Branson first started shopping with them 15 or 20 years ago, “He bought the usual suspects—Moët, Dom Perignon—but was eager to try something different;” Battipaglia introduced him to smaller producers like Bonnaire, Egly-Ouriet and Guy-Charlemagne. “I think at first it was the taste profile of the smaller growers that got him. There came a point about five years ago when he really seemed to make a leap to small producers.” He appreciated their unique position in Champagne: grower-producers use only their own grapes and are typically family-owned, whereas a big house like Roederer buys grapes from all over the region, and might be part of an international conglomerate.

In addition to the Sugar Bowl and dabbling in talent management, Branson has at various times owned clothing brands, a record label and an art gallery; that entrepreneurial bent and a desire to finally spotlight his role in the hip-hop world all informed his latest venture into champagne production. “I really wanted to be involved,” he says. “You reach a point in life where you’ve been an innovator, and you get recognition from individuals, sure, but not in the big picture. It’s been that way throughout my life, but this time, this is something with my name on it.”

In 2004, friends put him in touch with Guy-Charlemagne, whose wines Battipaglia had introduced him to 15 years earlier. During a three-month visit to Le-Mesnil-sur-Oger, the tiny French village where the producer’s based, Branson developed his own cuvées. He says he didn’t feel he had to make any big changes to create the champagnes he envisioned; it was more a matter of tweaking Guy-Charlemagne’s established style.

It was a fun process, especially compared to the fight to get his name on the bottle. The French wine industry is heavily regulated, champagne in particular, so Branson struggled through a morass of government regulations and a trademark dispute before he was ready to bring his wines to the U.S. There was a casualty in the battle: For now, the French government says Branson must be content with simply “Branson B. Cuvée” on the label, underneath the established Guy-Charlemagne name.

Branson says it’s a small bump on what he intends to be a long road: “I’m not just out for the hype, for 15 minutes of fame,” he says. “The champagne needs to stand the test of time; I want the name to be around for 100 years, to create a legacy for my family.” He’s chipping away at the legal hurdles, one by one, slowly edging the Branson name toward the center of the label; meanwhile, he wants to build his brand gradually, so it develops a strong base—hence the reasonable pricing. “I could have high-balled it, but I want every consumer to try it,” he says.

For now, he’s distributing only in New York; his friends at Garnet Wines are selling it, as are several clubs and the two Megu restaurants. And he hasn’t lost his gentle touch; he’d still rather open a bottle and let buyers decide for themselves, without a lot of wine lingo. Treviño-Boyd says the rosé is what got her attention.“It’s stuck with me since the first time I smelled it—sort of like Pinot from Ambonnay, but lighter, more floral, expressive, juicy … it smells delicious,” she says.

The hip-hop community has been surprisingly reluctant to rally around Branson’s champagne, and he’s a bit miffed that Jay-Z, for example, hasn’t added the bubbly to the list at his 40/40 clubs. But word is spreading: rapper The Game put it on his performance rider for his world tour, and R & B singer Lisa Fischer had the blanc de blancs shipped to her in Europe, where she was touring with the Rolling Stones. Flavor Flav and Azure, a singer on Snoop Dogg’s label, have both said they enjoy the bubbly as well.

Branson is proud of his roots, and while he’s reluctant to be pigeonholed as “hip-hop champagne,” he knows that his story gives a unique spin to his product. P. Diddy has hinted that a champagne of his own could be in the cards, and Jay-Z has thrown his name behind Armand de Brignac, a Cattier brand-name resuscitated after the Cristal hubbub. In the meantime, Branson has patiently gone his own way. “I’m the first to actually do it,” he says. “No other black man has done that before. I’d like to keep it real.”

We’ve had Daiquiris on repeat lately, and this L

Veer off the strip for some of the city’s best food and drink.