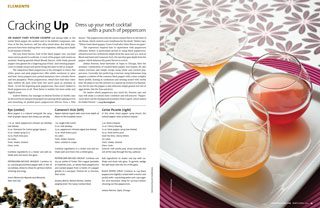 On almost every kitchen counter and dining table in the world, black pepper sits nestled next to its faithful companion, salt. Over at the bar, however, salt has often stood alone. But lately peppercorns have been making their own migration, adding spicy depth to all manner of drinks.

The tiny dried berries, fruit of the black pepper vine, can lend some serious punch to cocktails. A crack of the pepper mill creates an aromatic floating garnish (think Bloody Marys), while finely ground pepper rims glasses for a lingering pop of heat. And infusing peppercorns in simple syrups and spirits brings the spice to life as a liquid.

The ubiquitous black peppercorn is the strongest in flavor, but white, green and pink peppercorns offer subtle variations in spice and heat. Green peppercorns, picked immature, have a fresher flavor and less pungency. White peppercorns, which have had their outer layer rubbed off, pack some heat, but aren’t quite as aromatic as black.  As for the beguiling pink peppercorns, they aren’t related to black peppercorns at all. Their flavor is similar, but more acidic and slightly sweet.

Seattle bartender Andrew Bohrer says he discovered an unexpected peppercorn pairing while sipping scotch and munching on pickled green peppercorns leftover from a Thai dinner. “The peppercorns took the savory umami flavor to the back of my throat, which created a new timeframe for the drink,” Bohrer says. “When I taste black pepper, I taste it well after other flavors are gone.”

The experience inspired him to experiment with peppercorn infusions. Bohrer is particularly partial to using black peppercorn-infused scotch for cocktails he adapts from the 1920s and ‘30s, such as Blood and Sand and Cameron’s Kick. He says they gain depth from the pepper, which balances the peaty flavors in scotch.

Joshua Pearson, head bartender at Sepia in Chicago, likes the aromatic combination of cracked black pepper and tequila. He also makes tinctures and simple syrups using whole and cracked peppercorns. Currently, he’s perfecting a tincture using Indonesian long peppers, a relative of the common black pepper with a more complex flavor profile, hinting at cardamom and nutmeg mixed with earthy heat. He plans to use the infusion in a spiced-up version of a Manhattan, but he says the pepper is also delicious simply grated over hot or eggy drinks, like the Tom and Jerry.

No matter which peppercorn you reach for, Pearson says any type will make a cocktail more confident and self-assured. “Peppercorns draw out the background aromatics from a spirit, which makes for bolder flavors.

Lucy Burningham
Lucy Burningham is a writer who covers craft beer, food and travel from Portland, Oregon. She combined two of her favorite things—bikes and beer—when she co-authored the book "Hop in the Saddle: A Guide to Portland’s Craft Beer Scene by Bike." She holds a master’s degree in nonfiction writing from Portland State University and is currently writing a book about her quest to become a certified beer expert (Roost Books, 2016).