Riffs: Spicing up the Michelada 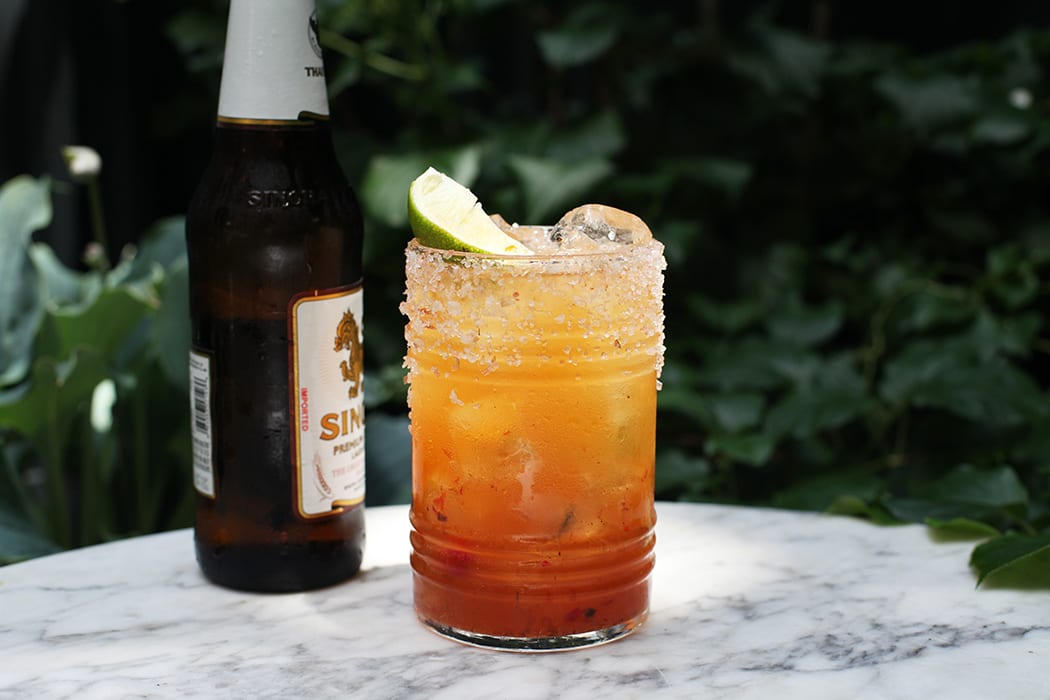 The Michelada made its way to American glasses in the ’80s by way of Mexican restaurants in border states, though the drink’s actual origin remains a topic of debate. Cocktail historian David Wondrich entertains the tale of a gentleman by the name of Michel Esper Jorge from San Luis Potosí, who, upon arriving at his local athletic club for a game of tennis in the 1970s, found himself in need of a refreshing and fortifying drink. He requested a glass of ice with lime juice, a bottle of beer and assorted condiments like Worcestershire and hot sauce. After doctoring the drink to his liking, he dubbed it a Michelada.

Others point to the less elaborate theory that the name is a simple portmanteau, as chela is slang for beer in Mexico. “We associate the name with mi chela helada—my cold beer,” says José Luis León, director of operations for Limantour in Mexico City. “I’ve never heard of any ‘Michel.’ ”

The Michelada’s specs are as murky as its etymology, with no two recipes exactly alike, though the one constant seems to be the inclusion of a Mexican lager with lime and salt. “The Michelada in general is very tricky to define and changes a lot depending on the area of the country you’re in,” says León. “For us in Mexico City, a Michelada means beer plus lime juice, ice and salt on the rim, while a Cubana also includes a mix of Worcestershire, Maggi and Tabasco, and con Clamato means with tomato juice.”

Here are a few ways today’s bartenders are riffing on the classic formula.

The Michelada wouldn’t be the ubiquitous favorite it is today without an ice-cold beer as the base, so this component is critical to the drink’s formula. The most traditional (and perhaps most fitting) beer used is a Mexican lager, because its crisp, clean flavor complements the drink’s citrus and spice flavors, but many bartenders experiment with different beer styles in their variations. At the Hotel San Jose in Austin, the Michelada isn’t a single drink on the menu but rather a framework offered as an add-on to any beer served at the bar. “I enjoy it with a Negra Modelo, as it adds a bit of body and malt to the drink without making it too heavy,” says lounge supervisor Laura Burnette. “Lighter beer like a kölsch or a light pilsner makes for a more refreshing, tangy Michelada, and darker or maltier beer makes a softer, rounder, more filling Michelada. For those that aren’t drinking, I’d suggest a ‘miche-nada’ which is made with Topo Chico instead of beer!”

Meanwhile, in Tucson, Arizona, the Michelada mix at Button Brew House is suited to any style of beer, but the bar’s go-to is a housemade red ale spiced with chiltepín chile peppers (a variety specific to the Sonoran Desert that are about 23 times more spicy than a jalapeño). “The added spice and the flavors of the beer give the Michelada so much more complexity than a Mexican Lager,” says brewer and owner Todd Button. The second most popular combo at the taproom is a pilsner called Volstead, which yields a Michelada that tastes close to one made with Mexican lager. “Other popular options are the Black Michelada with our All Souls Stout, a classic American Stout, and the Hoppy Michelada with our Button IPA, a West Coast style American IPA,” Button adds. “My personal favorite is to use the Chiltepín Red Ale topped with 2 ounces of the All Souls Stout. It adds very light coffee, chocolate, and toffee flavors, which balances very nicely.”

While early Micheladas were a simple blend with a dash of hot sauce, modern versions are all about the sauce. And not just any hot sauce. In Charleston, the crew at Minero employs three kinds of hot sauces—Cholula, San Luis and Valentina—for a triple kick of spice. “It was important to us to choose hot sauces that represented some of the same chiles that we use in our cuisine. All three brands are produced in Mexico, so we are able to celebrate the amazing chiles that their country offers,” says general manager Pam Berry. “Cholula uses piquin and arbol chiles and has a mild vinegary taste that complements the lime and clam juices quite well. Valentina uses puya chiles, which offers a fruitier flavor profile while still packing some heat. San Luis features several different chile flavors like cascabel, arbol, and ancho, and offers a welcome smokiness into the mix. When combined, all the chiles, vinegar, and spices meld together to create one big punch of flavor that pairs perfectly with cold beer.”

Berry also adds a bit of clam juice to the mix, to make the drink closer to the con Clamato. “By not using tomato juice, it allows the hot sauce blend to take a stand as front runner and meld perfectly with the clam and fresh lime juices,” says general manager Pam Berry. Worcestershire sauce adds extra depth. “Worcestershire is one of those condiments that is uniquely universal, and for us, it found its place mixed with hot sauce. One of the main ingredients is anchovies, which supplies a brininess that goes hand in hand with the clam juice. Essentially, we use Worcestershire for its umami quality that a Michelada, in our opinion, calls for.”

At La Mezcaleria in Vancouver, B.C., the bar staff also welcomes Worcestershire to the mix, as does the crew at the Hotel San José, where they also include soy sauce and Tabasco. “The soy sauce gives our Michelada umami and texture, while the Worcestershire gives it a bit of briny funk,” says Burnette. “Tabasco is light, smoky, and doesn’t weigh down our Michis as other heavier, more tomato-y sauces might. Together, these ingredients bring depth and complexity to what would otherwise be a tart, if not very refreshing chelada.”

Sweet-tangy Chamoy adds a piquant element to variations like the Chabela Cortez, and at Espita Mezcaleria in Washington, D.C., the bar staff eschews bottled hot sauce altogether, opting instead for a mix of fresh fresno and habanero chiles, plus dried arbol chiles for heat. “There’s nothing wrong with bottled hot sauce, but we have lots of fresh ingredients for many different dishes, including our own fermented hot sauce, so adapting a recipe for a Michelada was a natural choice,” says bar manager James Simpson. “Our Michelada tastes of chiles with a light touch of tomato, with layers of spice and umami. The brightness of the lime and fruitiness of the fresh chiles comes up front and starts off very refreshing. A little sweetness from the tomato follows, and then the layers of chiles start to unfold.”

Straying even further from the classic framework, some bartenders incorporate extra fruits or veggies in addition to lime and hot sauce. Tomatoes typically star in house mixes, but other fruits can play second string with ease. The Michelada Pirata and the Michelada del Piña both play with pineapple for an added layer of tropical flavor. For the latter, Polite Provisions co-founder Erick Castro (also of Raised by Wolves) says he was inspired by what a Michelada would taste like if it existed within the tiki-sphere. “I knew it would be a little more than simply adding pineapple juice, as I wanted to completely marry the idea of exotic spices with the South of the border classic,” he says. Cinnamon syrup and spicy bitters amp up the tropical personality of the drink. “I knew that if I used a more conventional ingredient for heat, I would end up with a more conventional Michelada, and that’s what I most wanted to avoid. Instead, I wanted to play up the spice in the cinnamon and intensify that so could get the heat without losing the baking spice.”

In the TJ Michelada, Joseph Mortera at Limantour in Mexico City uses crushed cucumbers to bring more complexity to the mix. “Cucumber works perfectly to lift up the freshness of the citrus and balance the tomato and clam juice,” says León. The Michedore welcomes tomatillos to the glass for a bit of tartness, and in the Singchelada at New York Thai restaurant Wayla, papaya comes into play with Thai chili paste, soy sauce and Singha lager for an Asian-inspired take on the classic. “All the flavor profiles [of the Michelada] are also so natural to the Thai palate, so we thought it would be cool to remake the drink through a Thai lens,” says beverage director Anthony Baker. “The papaya sauce has a pronounced sourness and savory undertone balanced by a natural sweetness from palm sugar. This mixes well with the Singha, which is a light and clean tasting lager, and we amp it up by adding in Thai chilies, which kind of enhances all the flavors.”

Unlike the Bloody Mary, a drink with a garnish that can sometimes be a meal in itself, the Michelada’s garnish needs nothing more than a single lime wedge or wheel. Where recipes typically deviate is in the salt rim for the glass. Sea salt will do the trick, but many bartenders opt for weaving extra spice into the salt. Tajín is one of the most popular choices, showing up in iterations at Chicago’s The Laurel Room, La Mezcaleria in Vancouver, and taquerias from coast to coast.

In Las Vegas, China Poblano used the more traditional sal de gusano, salt made from crushed agave worms. It’s also easy to make your own blend with a mix of dried chile peppers and salt. At Espita, a house salt features a blend of dried chile peppers, lime zest and salt—a formula that’s fun to experiment with depending on what chiles you can find. “The dried chiles we get from Mexico are incredible, so much flavor, and perfect in a salt rim,” says Simpson. “The first thing to hit your tongue is salt and spice, setting the stage to make the lime and beer that much more refreshing.”

A cherry plum salt dresses up the glass at Wayla. “Oftentimes drinks need that little extra something to make them special, so that’s what this salt rim does for our Michelada. The cherry blossom is an aromatic component, so you don’t really taste it, but is actually a faint floral aroma you notice right before you take a sip,” says Baker.