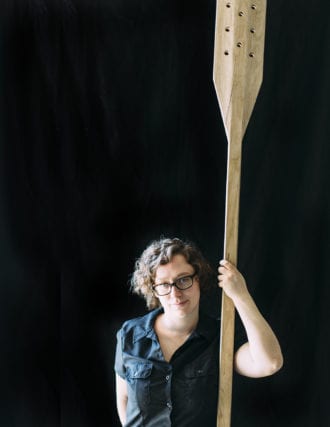 Maggie Campbell is very fond of Barrel P32. It’s a former brandy cask that she acquired from a mentor, and it serves as sort of an enforcer. “If something’s not softening, something’s not taking its edges off, something needs to be disciplined,” she says, pointing it out, “then it’s P32.” She’s scrawled on it, “Old Ironsides.”

Until it was recently decommissioned, P32 sat with around a hundred other barrels, most full of aging rum. This is the cast in a low-key drama Campbell directs at Privateer, where she’s head distiller and the sole full-time production employee, staging it all in a charmless industrial building next to a marsh in the coastal town of Ipswich, Massachusetts, about 30 miles north of Boston.

Campbell points out a few other barrels and remarks on their subtle strengths and weaknesses. “I know that P51 is going to be dark and toasty,” she says. “P52 is nice—oak forward, citrus, golden grapes.”

Then there’s P34—“my briny barrel,” she says. (It has the word “salty” chalked on it.) It’s a third-use barrel, having previously seen action both as a bourbon and brandy barrel. P34 also has slightly thinner staves, she discovered during a small fit of measuring, and so she surmises this anomaly may account for some of the saltiness. When she arrives at work in summer, the humid air is thick with the tang of the saltwater marsh; the flavor somehow finds a way in.

Campbell, who just turned 30, was born in Colorado and raised in California. She studied philosophy at the University of Colorado, then worked at a Denver wine shop, where she developed a keen interest in the extraordinary ways one can torture a grape. (She’s since earned her Level 3 advanced certification from the Wine and Spirits Education Trust in London, and took her exam for Level 4 in June; she specializes in French wine and sherry.)

At the wine shop she found herself also drawn to high-end spirits, all the more so when she realized that few could explain to her why one whiskey was great and another was not. She set out to learn everything should could about fermentation, distillation and aging, connecting first with Scott and Todd Leopold of the Denver-based Leopold Brothers and talking her way into a private tour of their then-somewhat secretive distillery. “It totally changed my life,” she says. “That’s the day I thought, ‘I have to do this.’ ”

So began Campbell’s education in the making of spirits. “She was really hungry for knowledge, and was willing to put in the work,” says Todd Leopold. “We get a lot of phone calls and emails from people who you can tell haven’t cracked a single textbook, and haven’t really tried to learn anything themselves.”

Campbell also introduced herself to Jake Norris, then at Stranahan’s Colorado Whiskey, and she volunteered to help bottling, then kept asking questions as long as he would answer them. (“I realized Jake had a love of pastrami sandwiches,” she says. “I exploited that.”) She also took a distilling class at the Siebel Institute in Chicago, where she met instructor Dave Pickerell, former distiller at Maker’s Mark and now a spirits consultant; he became another mentor.

In 2009, Campbell heard of an opening at Germain-Robin, which since 1982 had been making fine brandies using Cognac stills in Mendocino County, California. She moved west and worked there for just shy of a year, learning the idiosyncrasies of barrels and traditional French aging techniques. “I was impressed with how precise and very technical she was,” says Hubert Germain-Robin, who had sold the company by the time Campbell arrived but became her friend and mentor. And he appreciated her background as a sommelier. “I was also impressed with how she could describe a sample,” he says.

So, with a background in wine, whiskey and brandy, what was Campbell’s next step? Rum, of course.

Privateer Rum was founded by Andrew Cabot, a software executive and scion of a fabled New England family. (Famous local ditty: “And here’s to good old Boston/The home of the bean and the cod/Where the Lowells talk only to Cabots/And the Cabots talk only to God.”) In the course of some genealogical research, Cabot turned up the fact that his sixth great-uncle was a merchant, rum distiller and privateer in 18th century New England. An idea for a new business was born.

Privateer started shipping bottles in 2011; Campbell came on board on St. Patrick’s Day in 2012, moving east with her assistant distiller, Peter Newsom—who, not coincidentally, happened to be her husband. Her task? Focus her broad training and keen judgment on the distillation and blending of rum. The problem? “I’d made everything but rum,” she says.

Campbell threw herself into gleaning everything she could about rum, reading ancient treatises and getting advice from other rum distillers. “I knew more than I thought I knew,” she says, “but I still had to learn lots really fast.”

She arrived bearing ideas about how to improve the making of rum; she changed the yeast, and tweaked the distillation process. She advocated for laying more rum up in barrels, and drew on traditional aging and blending techniques.

Campbell’s barrel management borrows heavily from traditional Cognac coupe practices, but she also brings a range of other techniques from the wine and whiskey worlds, and beyond. She uses both new and used bourbon barrels (and has a predilection for used barrels from Four Roses), and in her ideal arrangement, she’d put the rum in a new barrel for a year for a “kiss of oak,” she says, and then move it to used casks for the rest of the aging, so as to not obscure the nuances of fermentation and distillation.

When blending time arrives, Campbell selects a bit of rum from one barrel and more from another, like orchestrating a dinner party with a good mix of guests. The batch then gets rebarreled and is aged further. In her sixth batch, for instance, she blended selections from 23 barrels to develop just the right admixture of briny, oaky and spicy, with a delicate underlayer of baking spices.

The end result is a sophisticated rum that wins awards. Last year, The Spirit Journal publisher Paul Pacult gave Privateer four stars (“highly recommended”), and other rum authorities similarly endorse Campbell’s approach. “She’s very focused on every aspect,” says rum importer and expert Ed Hamilton. “You get her talking about barrels and you think, ‘My god, this woman is really intense about barrels.’ And then you get her talking about fermentation and she’s intense, and then, well, distilling … it’s the same. She really sees the big picture. So many other craft distillers just focus on one aspect, and they think that’s all they need to do.”

Campbell is thrilled at the opportunity she’s been granted at Privateer, and she’s especially pleased that she has a boss who lets her do what needs doing without undue pressure to move bottles out the door before they’re ready. She also appreciates that Cabot encourages her to keep broadening her knowledge and that he supports her efforts to experiment with batches. One result: last year Privateer released a rich, supple limited-edition gin, using their own high-proof rum as a base.

Over breakfast recently in Denver, Campbell pulled out a 14-ingredient vermouth recipe she’d devised not long after she’d begun following what turned out to be her career path. “It’s been living in my wallet for six years,” she says. “What’s another six?”

Or maybe seven or eight. She’s been distracted lately by esoteric unaged brandies (or eaux de vie) from Austria, including a delicious beet eau de vie she once sampled. “What’s happening in Austria is some of the most exciting stuff,” she says.

So what’s next to come out of the still? Possibly a hay eau de vie, just like one from Austria that recently caught her attention. She’s hoping to use meadow grass harvested from Cabot’s brother’s coastal farm, capturing time and place in a bottle.

She hasn’t brought it up with her boss yet. One hopes for the best.