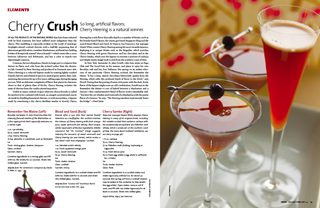 Of all the products of the natural world that have been tinkered with by food scientists, few have suffered more indignities than the cherry. This meddling is especially evident in the world of mixology: Stoplight-colored cocktail cherries with a half-life surpassing that of plutonium garishly adorn countless Manhattans, and back bars holding bottles of deceptively named “cherry brandy”—which tastes like a cross between Lifesavers and Robitussin, and has a color to match—are depressingly common.

Common, but not ubiquitous, thanks in large part to a liqueur that derives its flavor and color from the orchard rather than the chemistry lab. Created by Peter Heering and produced in Denmark since 1818, Cherry Heering is a ruby-red liqueur made by soaking lightly crushed Danish cherries and a blend of spices in neutral grain spirits, then cask-maturing the mixture for up to five years, adding sugar during the aging process. With an elaborate complexity of flavor that places its character closer to that of gâteau than of Ho-Ho, Cherry Heering reclaims the taste of cherries from the candy-colored impostors.

Useful in many cocktail recipes wherever cherry brandy is called for (and not to be confused with kirsch, an unaged, unsweetened eau de vie made by distilling fermented cherries, or with maraschino, a liqueur made by sweetening a dry cherry distillate similar to kirsch), Cherry Heering has a rich flavor that adds depth to a number of drinks, such as the brandy-based Ulysses, the classic gin-based Singapore Sling and the scotch-based Blood and Sand. In San Francisco, bartender Neyah White counts Cherry Heering among his most versatile liqueurs, deploying it in unique drinks such as the Brigadier, which matches Cherry Heering with green Chartreuse and hot chocolate; and in the Cherry Samba, which uses the liqueur to sweeten a mixture of cachaça and deeply smoky single-malt scotch from the southern coast of Islay.

In New York, bartender St. John Frizell is an ardent advocate of one particular Cherry Heering cocktail, the Remember the Maine. “It has a deep, almost chocolatey bittersweet quality from the Heering, which adds this profound depth of flavor to the drink,” says Frizell. Noting that the pairing of anise-rich pastis with the dark, fruity flavor of the liqueur might seem an odd combination, Frizell says in the Remember the Maine—a sort of hybrid between a Manhattan and a Sazerac—this counterintuitive blend of flavors works remarkably well. “You have the rye whiskey and vermouth of a Manhattan with the pastis flavor of a Sazerac,” he says. “The Heering somehow mysteriously forms the bridge.”