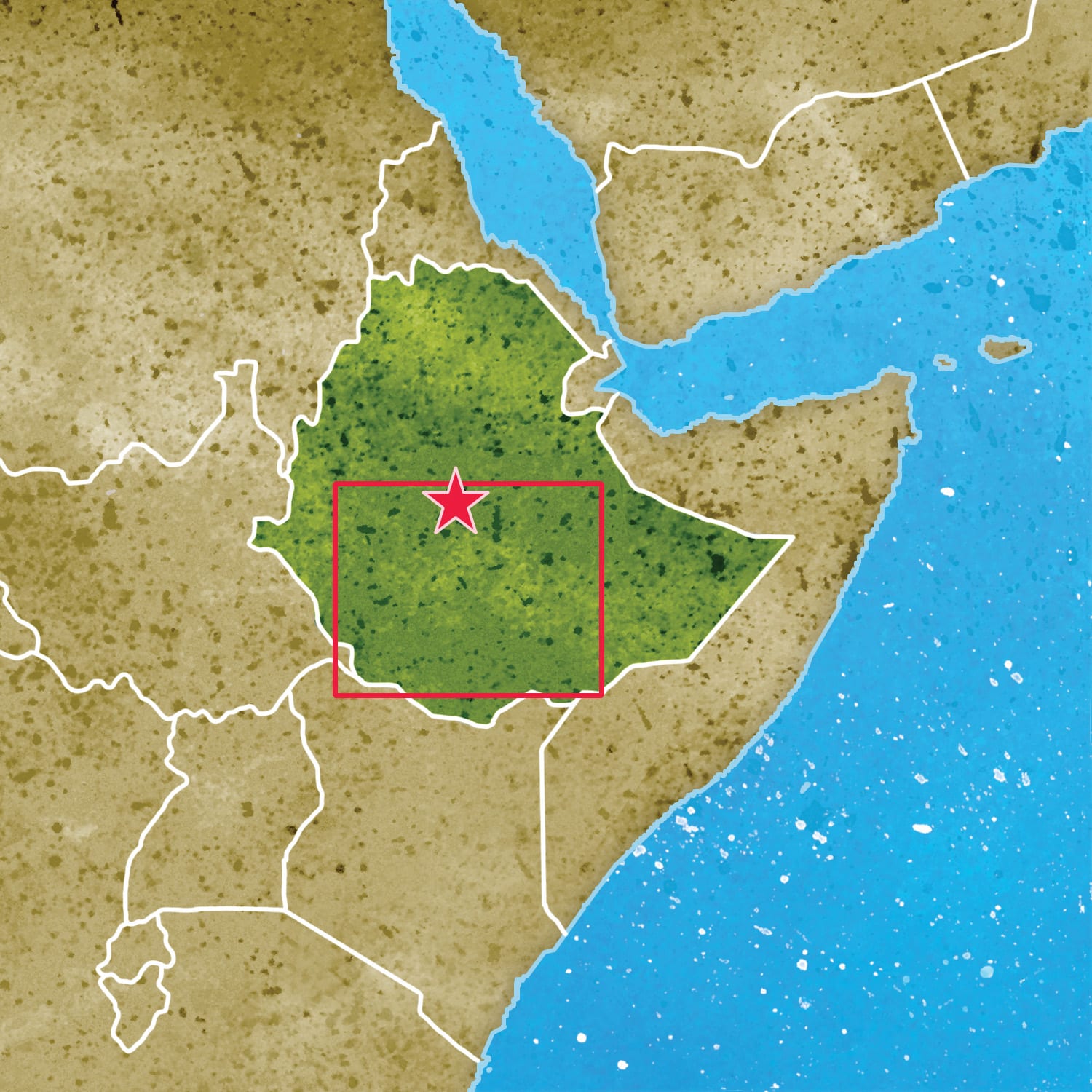 Coffee’s roots trace back to Africa. But unlike in most coffee-producing countries, where it was introduced as a cash crop, arabica coffee grows wild throughout Ethiopia’s high-altitude, forested plateaus, with a biological diversity outnumbering that of every other country combined. “Varieties like bourbon or typica basically populated the rest of the planet,” says Jason Long, CEO and head of sourcing for Café Imports. “For example, in Mexico, there’s going to be caturra, bourbon and typica—and that represents the whole country, with maybe a few others. Outside of Ethiopia, there are about seven varieties [grown commercially].” Inside Ethiopia, though, the varieties growing wild number into the thousands.

Coffee in Ethiopia is also grown differently than anywhere else in the world. Coming in large quantities from smallholder and subsistence farmers operating less than one hectare, these “garden coffees” are grown among other crops and through the forests, then brought to market via co-ops or private washing stations. The Sidama coffee region takes its name from a subzone of the Southern Nations, Nationalities, and Peoples’ regional state and is one of the country’s larger producers, encompassing the Yirgacheffe region as well. Both coffees are highly prized among roasters. “The taste of the coffees really sets them apart,” says Long. “Yirgacheffes and Sidamas have strong citrus and stone-fruit flavors that are found almost nowhere else in the world.”

Nearly half of Ethiopia’s coffee remains in the country for local consumption. Of the 7.1 million 60-kilo bags produced last year, less than 4 million were exported, with the U.S. purchasing about 10 percent of that coffee by volume. And unlike many countries where the focus is on coffee as commodity, traditions in Ethiopia run deep. Coffee ceremonies, which involve the roasting, grinding and brewing of coffee over a duration of nearly two hours, are an integral part of social customs. “In Ethiopia, everyone drinks coffee,” says Long. “You could be in the middle of nowhere and see a coffee ceremony on the side of the road. It’s part of the culture.”

*Ethiopia possesses more than 99 percent of the genetic diversity for the Coffee arabica plant, with more than 11,000 unique genetic samples of plant material collected. Researchers are looking to Ethiopian coffees as a possible key to preserving the arabica species, which is suffering worldwide from disease and climate change.

*Popular legend tells of a goat herder named Kaldi who was the first to discover the powerful properties of the coffee plant when his goats, after grazing on the bright red berries of the shrubs, became so energetic they were practically dancing.

*The Sidama Coffee Farmers Cooperative Union represents 53 co-ops and more than 80,000 smallholder farmers for whom coffee can represent up to 75 percent of their household income.

Intelligentsia Ethiopia Tikur Anbessa, Yirgacheffe Edition
A washed coffee sourced via a direct-trade partnership with the farmers of METAD, this year’s Tikur Anbessa is flush with flavors of honeydew, passionfruit and lemon curd. $24/12 oz., intelligentsiacoffee.com

Counter Culture Apollo
This Ethiopian offering from Counter Culture is made available year-round by sourcing rotating heirloom coffees from several co-ops, such as Yirgacheffe’s Banko Dhadhato. The flavor will change seasonally but will always remain clean and bright. $15.75/12 oz., counterculturecoffee.com