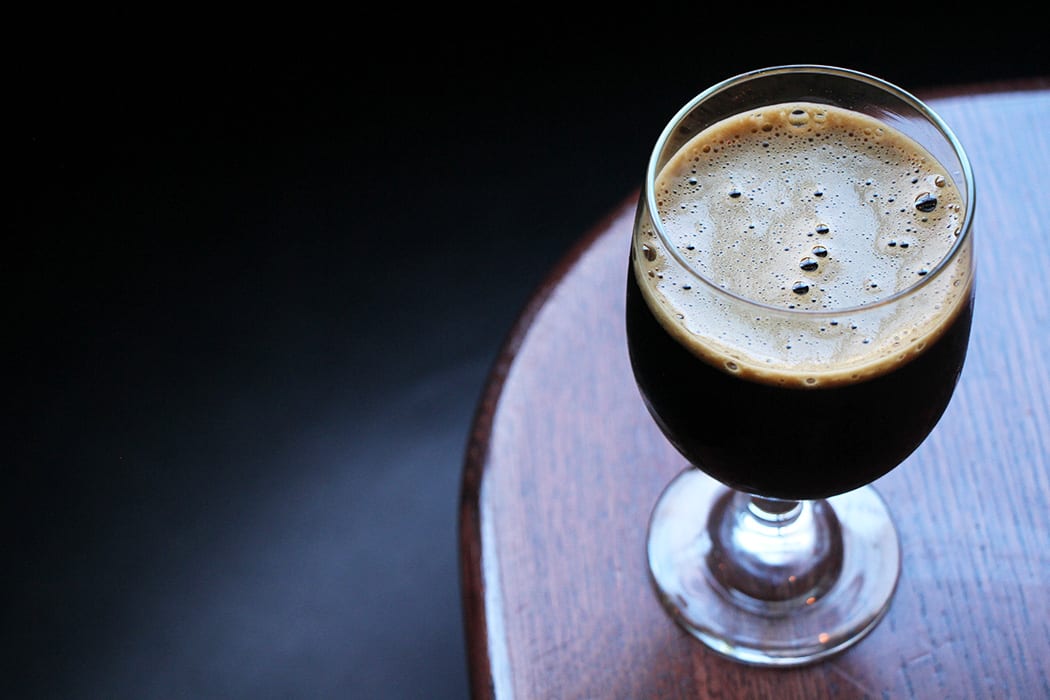 Not all stouts—a style marked by the use of roasted malts and barley—are created equal, with alcohol levels, recipes, flavorings and textures running the gamut. From the traditional stouts that emerged after porter rose to popularity in England in the 1800s to today’s kaleidoscope of craft variations, the characteristics found within the category are myriad. To help demystify what differentiates stouts from one another, here are a few of the most common types available today.

Dry Irish Stout
When you think of Irish stouts, Guinness is often the first to come to mind. The iconic brewery has been making dry, balanced beers since before the “dry Irish” moniker became popular. “The reason some Irish stouts became known as ‘dry’ is the practice of using unmalted dark-roasted barley for color, aroma and taste, in place of roasted malted barley,” says Guinness brewmaster Stephen Kilcullen. “Unmalted barley doesn’t contribute much, if any, sugar and body to the beer, meaning it has a dryer, less sweet taste and often a slightly more roasty, almost astringent quality.” Today, many other breweries in Europe and in the United States make beer in a similar likeness. Most offer the same pleasing bitterness, super-dark inky appearance and lightweight ABV, making the style one of the most easygoing in the stout realm. Try the Irish Stout from Breckenridge, which joins the brewery’s year-round offerings this February.

Milk Stout
Also called “sweet stouts,” milk stouts are marked by the addition of lactose, a sugar naturally found in dairy, which lends a soft, creamy sweetness. The full-bodied (but oftentimes low-ABV) beer has roots tracing back to the 1900s in Great Britain, but Left Hand Brewing was one of the breweries to popularize it in the U.S. after the first release in 1998. Director of brewing Matt “Truck” Thrall says a good milk stout is straightforward. “Does the beer finish sweet and leave me wanting another sip or is it overly burnt/roasted? Dry and overly roasted stouts have their place, but a milk stout should always finish like a glass of chocolate milk, coating the palate all the way down.” Other great examples of milk stouts, and more info on the style, can be found here.

Oatmeal Stout
As advertised, oats make an appearance in the recipe for oatmeal stouts, but the ingredient is used more for texture than flavor. Originally conceived as an alternative to the rising popularity of milk stouts in Great Britain, the addition of oats yields a creamy mouthfeel but without any sweetness. Try Firestone Walker’s Velvet Merlin (originally known as Velvet Merkin) and Anderson Valley’s Barney Flats.

Oyster Stout
Briny bivalves are indeed the main ingredient of this beer. What might sound like a science experiment gone awry produces a surprisingly seamless flavor match. The salty sea spray flavor of the oyster often seasons the robust brew with a subtle salinity while the creamy nature of the stout keeps things in balance. Year-round examples are hard to find as the style rarely draws a huge crowd, but Flying Dog’s Pearl Necklace Chesapeake and 21 Amendment’s Marooned on Hog Island are both good options.

Pastry Stout
Chicago Tribune beer writer Josh Noel penned the term “pastry stout” in his recap of this year’s FOBAB after finding a surprising number of cake and cookie-inspired beers (think gingerbread, German chocolate cake, milkshakes, etc.) at the annual barrel-aged beer festival. What qualifies? Stouts made with any number of baking ingredients, like cinnamon, coconut, chiles, cacao nibs, (Noel also includes coffee in this mix, but we’re breaking that out on its own merits). Critics believe some of these beers have taken flavor additives too far and obscured the soul of good beer, but there are some delicious examples to seek out, like Stone’s Xocoveza and Perennial’s Abraxis.

Coffee Stout
You could technically file coffee stouts under a master umbrella of “flavored stout,” but with brewers finding new and interesting ways to work with coffee as an ingredient, we think it merits its own category. Coffee beans can bring a pleasing bitterness to all styles of beer, but stouts have long been the go-to match because the dark malty character of the beer works so well with the chocolatey, bittersweet notes of coffee. Founders Breakfast Stout is a popular choice, and Lagunitas Cappuccino Stout is a noteworthy take on the style.

Barrel-Aged Stout
A magical chemistry happens when stouts spend time aging in a barrel. The alcohol percentage tips the scales over 10 percent, the body of the beer becomes silk-smooth, and wood characteristics like oak, vanilla and dry tannins, often sink into the roasted malts, creating a symphony of dark flavors. Goose Island Bourbon County Stouts are a landmark of this category, which has grown significantly since the brand first entered a barrel-aged beer into the Great American Beer Festival in 1995 (it was awarded an honorable mention because style guidelines didn’t exist at the time for barrel aging). Since then, many breweries have contributed to the category, such as Founders KBS and New Holland Dragon’s Milk.

Imperial Stout
Defined by its higher alcohol content (usually 8 percent or more), the Imperial Stout also has origins in Europe (many cite England’s habit for brewing big stouts for Russian clientele, hence the common use of the title Russian Imperial Stout), but it has become a favorite of American brewers. The higher alcohol often yields a more intense sweetness and pronounced dark chocolate and coffee flavors. North Coast Brewing’s Old Rasputin is known for its sublimely smooth texture and balanced flavor, and Oskar Blues Ten Fidy is another worth seeking out.