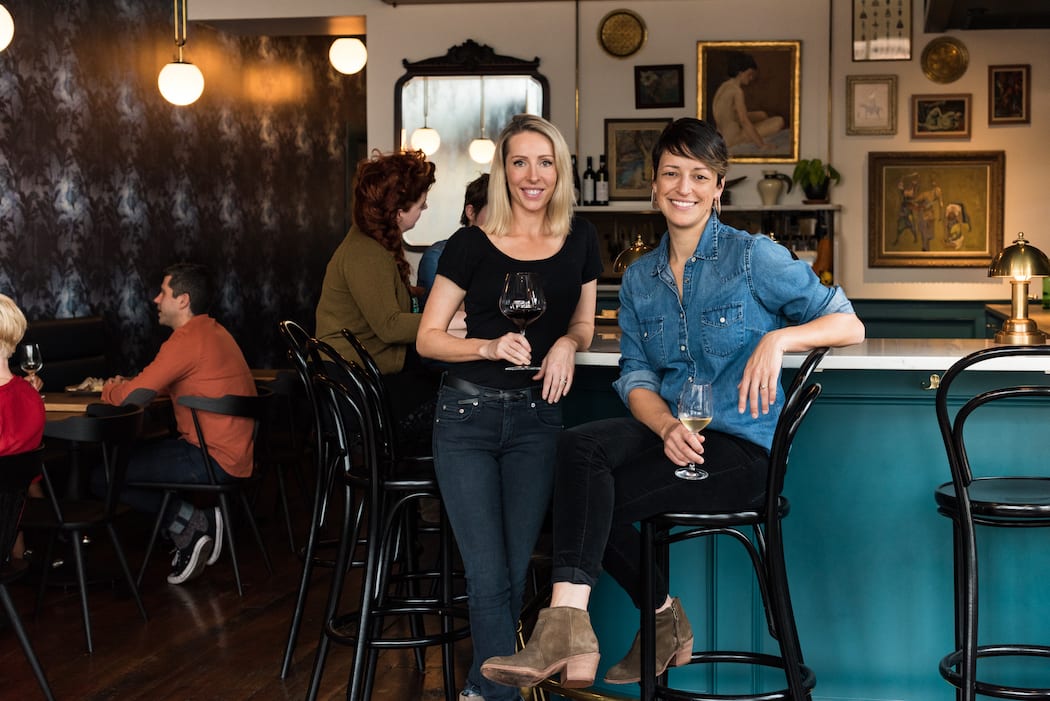 “We call it a restaurant,” says Dana Frank, co-owner of Dame, leaning an elbow on the marble-top bar. “I think people want to call us a wine bar because there’s such an emphasis on the wine. So maybe it’s a restaurant with a wine bar.”

The beautiful 37-seat space decorated with accents of black, peacock and gold has quickly become a new favorite in Portland, Oregon’s dining scene since opening at the end of September, and it secured a slot on our list of places to watch in our 2017 Imbibe 75 issue. Frank—a Food & Wine “Sommelier of the Year” in 2015 and a Bon Appetit “Sommelier to Watch”—has worked in the service industry for 15 years, with the last three spent running the wine program and front-of-house operations at Italian restaurant Ava Gene’s.

For Dame, she partnered with Jane Smith (co-owner of neighborhood bar the Knock Back) to create a space that feels at once feminine and strong. On the wine side, Frank took lessons learned at Ava Gene’s and paired them with her own passion for offbeat wines, particularly natural wines. “For a long time I felt like people were in the same sort of space about what kind of wine they wanted to drink—just California wine, burgundy and Bordeaux. There wasn’t a lot of adventurousness,” Frank says. “But I saw through Ava Gene’s that people will will drink unusual things if there’s an opportunity. So I took that with me and knew we had to do that here.”

Dame’s 140-bottle wine menu finds solid footing in France and Italy, while traipsing playfully through Eastern Europe before returning home to Oregon and California. And while Frank readily acknowledges the current trendiness of natural wines, her reasoning for highlighting these wines is rooted in a true affinity for what they bring to the glass. “They’re the wines I believe in the most—they’re the first wines I really fell in love with about 10 years ago,” says Frank. “I realize they’re getting a lot of play right now, but there are wonderful natural wines out there that don’t get talked about as much, so it’s not just a list of what’s hot right now.”

Some of Frank’s favorites include selections like Apátsági Hárslevelű from Hungary, orange wine Oranžák from Richard Stávek in the Czech Republic, and wines from Nicolás Marcos who blends known varietals like Mencia with a variety of uncatalogued native grapes in Asturias, Spain. “I’m having a bit of a moment with Xarel-lo, the grape most commonly know for Cava production,” she says. “There are now a handful of natural producers working with Xarel-lo, making it as still white wine, and I find it fascinating. It varies quite a bit from grower to grower and can have loads of minerality and brightness, but also beautiful tropical and saline notes.”

Frank’s willingness to stray into lesser-known territory takes the list at Dame beyond the trendy to a realm where wine drinkers can truly experience the spectrum of natural wines, and perhaps discover some new favorites along the way. “I like to drink wines that are transportive,” she says. “And it doesn’t mean they have to be nerdy wines, but when you drink it you can imagine where it came from.”