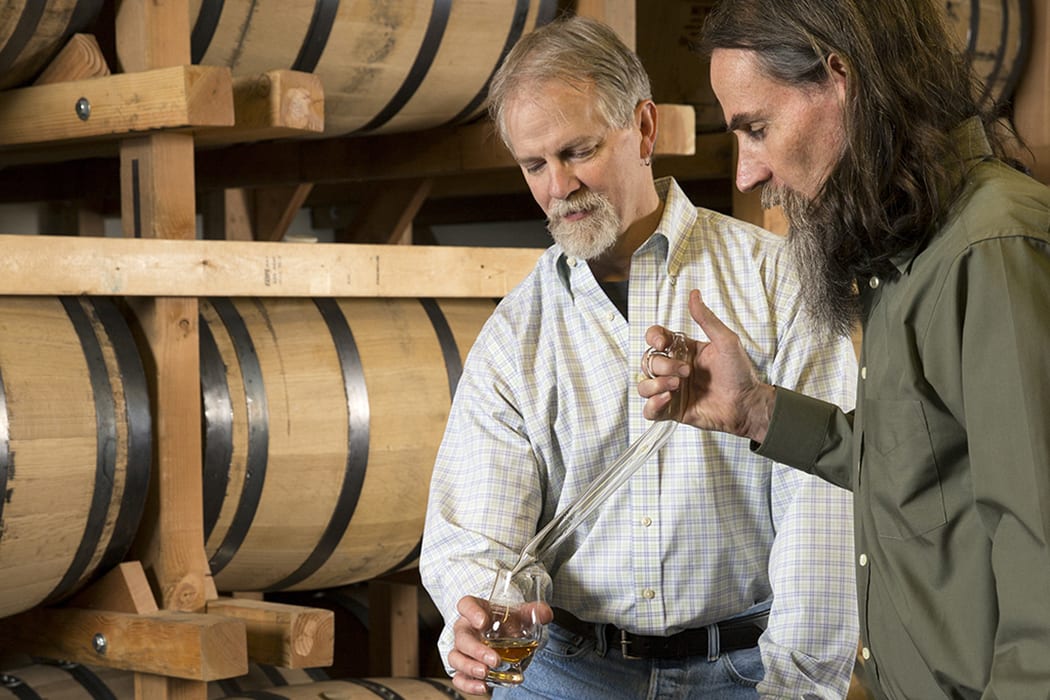 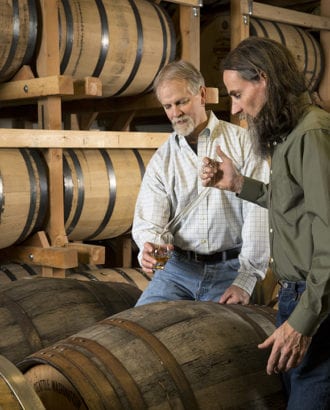 This year’s Imbibe 75 issue features Jason Parker and Micah Nutt, who opened Seattle-based Copperworks Distillery in 2013, selling vodka and gin. But Parker & Nutt both came from the beer world—Nutt as an avid homebrewer and Parker as a brewer at Pike Place Brewing and Elysian Brewing—and Copperworks’ long game was always focused on whiskey. Shortly after they released their first single-malt whiskey in mid-2016, Imbibe executive editor Paul Clarke sat down with the brewers-turned-distillers and talked about the intersection of beer and whiskey.

Paul Clarke: What was your original vision for Copperworks, and how was it shaped by your brewing backgrounds?
Jason Parker: We didn’t open to make vodka, and it’s silly in some ways to make vodka from malted barley—there are cheaper ways to do that. But we don’t filter our vodka, and that actually kind of interests whiskey people. For the whiskey, we’re making beer, except without hops. We’re using 100 percent malted barley, shipping it to one of two breweries that we’ve partnered with—Pike Place Brewery, and Elysian (I’d previously hired [Elysian co-founder] Dick Cantwell to help me at Pike). We work with real breweries and make beer the same way a brewer would—no adjuncts or additives no process changes. We boil the wash—no distilleries do that, most believe that by not boiling it, you’re getting more alcohol—and we use brewer’s yeast for fermentation at lower temperatures. This gives us some of the fruity, floral esters that you expect to taste in a craft beer, and that carries through in the spirits we make.

Micah Nutt: We wanted to take what we know about beer and bring great brewing techniques to whiskey. Bourbon and Scotch use older, traditional models—we’re using state-of-the-art beer techniques.

JP: Stranahan’s in Colorado did it similarly, and we researched that and it gave us the confidence to open a distillery, with all of our brewing knowledge applied to the wash production. We understood yeast management, and sanitation, and the selection of malts and how to combine them into a balanced flavor. That was our contribution to distilling at that time—and I think we’re going to see lots of other brewers coming onboard.

PC: How did you source your stills?
JP: Micah and I knew that we loved Scotch whisky, and we loved the type of distillation they did—it never even crossed our minds to try to become still-builders. So we went to one of the best still builders in Scotland—Forsyth—and asked if they could build a wash still, a whisky still, a vodka column and a gin still.

PC: And your barrels?
JP: We have two coopers—Independent Stave and Kelvin Cooperage in Louisville, Kentucky. Imagine two extremes of traditional cooperages: Independent Stave has taken the scientific approach, with instruments telling them where each barrel is in its process. Kelvin is more like an artisan, with experienced coopers handling the barrel, smelling the smoke and listening to the crackle—it’s evaluated by a person who helps it get to its end state. What I like about having both of these guys as 50/50 cooperage suppliers is we get consistency from one, and from the other we get the ability to do some pretty fine adjustments on toast and char. The same whisky goes into both cooperages, and we can pick which barrels we like and blend them together. Barrel-aging has been a big learning curve—it’s a science not tied to our [background].

PC: What can we expect from your whiskey releases?
MN: We’ve got some used bourbon, sherry and Cognac barrels [in the warehouse]. Our first two whiskey releases are all American oak, and we refilled those [barrels once we’d used them]. Reusing bourbon barrels has been done—it’s done all the time in Scotland. We wanted to see how it did in a barrel used by our whiskey. Two batches have been refilled, using 14 barrels of our own, and we’ve got two different beer streams that we’re making, and we’re putting whiskey in at a variety of entry proofs.

PC: How transparent are you being with consumers about your processes?
JP: We’re putting lots of variables up on the website [for each whiskey release], so people can see the yeast strain, where it was brewed, the entry proof on the barrel, the cooperage—even what was the angel’s share. I think it’s great to share that info, because as people get interested in Copperworks, there’s nothing they can ask that we won’t answer.