In the Wake of COVID-19, Coffee Companies Reimagine Community 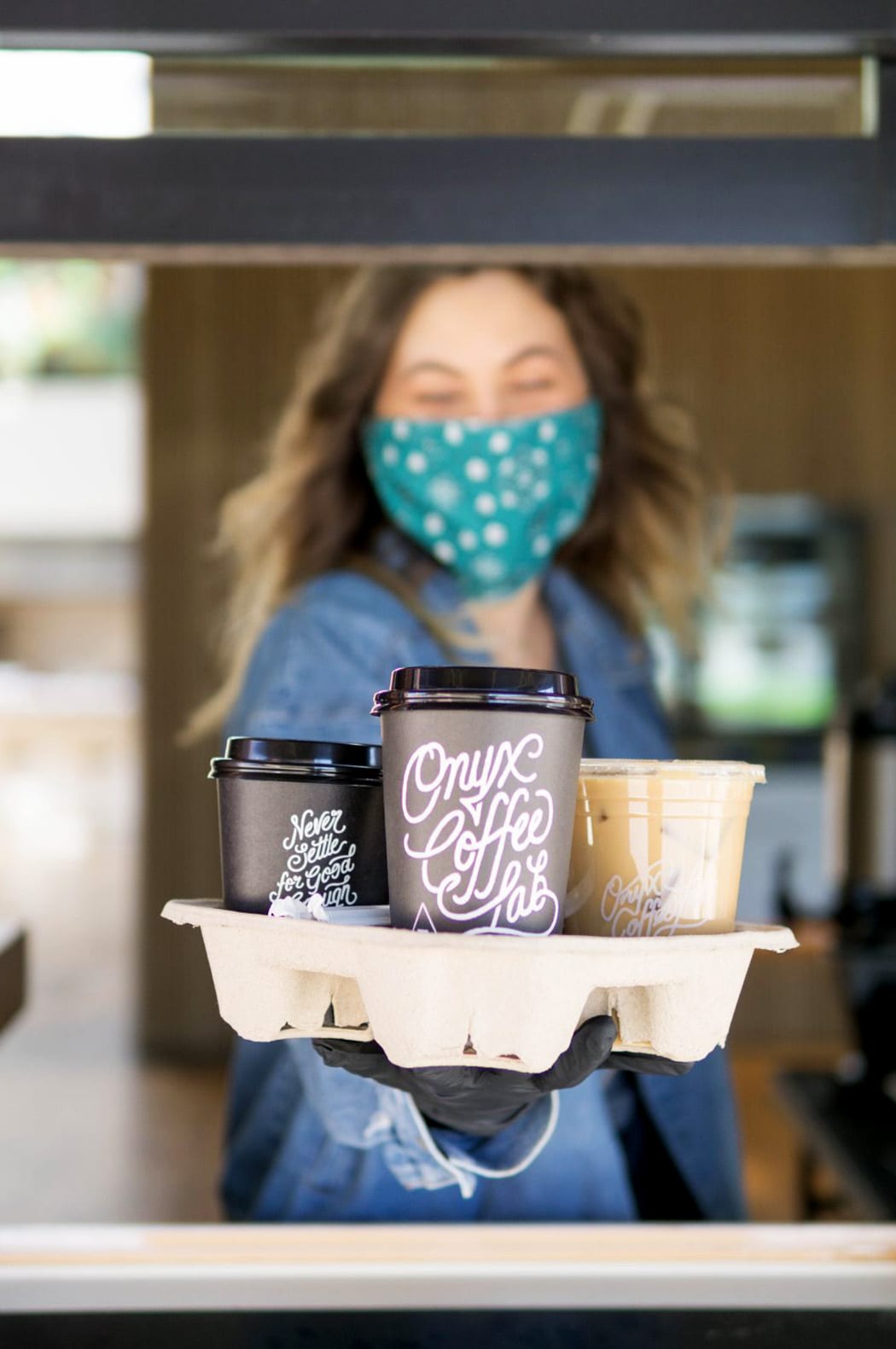 Remember the last time you visited the inside of a coffee shop? There’s the counter to absentmindedly lean on while ordering, the tablet used to tip, the cup passed by the barista, the jugs of half-and-half on the condiment bar, and it all culminates at the communal table, which is intended for sharing space, sitting shoulder to shoulder. It’s an innate familiarity and comfort long essential to the coffee shop ethos. “Even in early March when we were going through the different steps [to shift to] takeout and then pulling condiments away—pre-COVID, you didn’t realize how much sharing of stuff there was because you didn’t have to,” says James McLaughlin, president and CEO of Chicago-based Intelligentsia. “I think all of us are acutely aware of it now, and for us to be responsible citizens of the community, we have to adjust the way we were doing things before.”

A recent survey from the National Coffee Association showed more Americans drink coffee than ever before, with approximately 62 percent of people drinking coffee daily. “Coffee consumption is completely inflexible, and it just goes up every year,” says Go Get Em Tiger (GGET) co-founder and CEO Kyle Glanville. “If it’s a luxury, it’s the last luxury people give up.”

This ever-thirsty demographic has forced coffee shops and roasters across the U.S. to quickly adapt to new modes of existence that cater to customers while trying to stay afloat. Some have transitioned to takeout and local delivery, some have imposed reduced hours or temporary closures while furloughing or laying off employees, and others have shuttered permanently. Many operators, feeling they lacked governmental guidance or support, had to follow gut instincts and look internally to develop protocols and make tough decisions as news about the virus’ spread developed. In Portland, Maine, Tandem Coffee launched takeout service for a single day in early March before making the call to temporarily close its two brick-and-mortar locations—people simply weren’t abiding by social distancing rules. “I was hoping for the cafés to slow down to the point where we were just losing money and had no choice but to close. But that wasn’t happening,” says Tandem co-owner Will Pratt. “All the customers were still right on top of each other and it was like, this doesn’t work.”

In Los Angeles, approximately half of the nine GGET cafés transitioned to delivery and takeout initially, but one of the locations attracted so much foot traffic that it became a problem, says Glanville. To avoid overcrowding, they decided to only accept curbside pickup orders for open locations in advance through an app, which Glanville explains was never very popular, but is now. Similarly, GGET’s e-commerce business has more than doubled along with subscribers to their coffee club. Other specialty coffee companies are likewise looking online for answers. From daily Instagram updates regarding shop hours and order-ahead policies to emphasizing bagged coffee and brewing equipment for purchase online, digital platforms can help safely fill coffee needs while keeping connections with customers strong and roasters operating, albeit at reduced capacity.

The digital landscape has also proved a testing ground for reimagining the communal nature at the heart of coffee consumption beyond the café. After temporarily closing its coffee bars in five states in mid-March, Intelligentsia announced the launch of the Intelli Celly—a coffee advice hotline to bring the company’s coffee pros into callers’ homes—to reach both their regulars and coffee newbies alike. Amidst all the uncertainty of early March, team members and customers could still find solace and a small sense of normalcy in that daily ritual of getting a cup of coffee, McLaughlin says. “We can bring some of that element back to customers who are at home and want to learn more about coffee.” Remote coffee education has also become a focal point for Oakland’s The Crown: Royal Coffee Lab and Tasting Room, which has been hosting a webinar series on subjects like best at-home roasting practices and the current state of green coffee.

Some companies are transitioning resources at-hand to reach outside the norm. “We consider ourselves a community and a people-based business, first and foremost, and it’s very clear the needs of our community have changed rapidly,” says GGET’s Glanville. Toward the end of March, the roaster’s open locations offered market items like eggs, butter, produce boxes, and bread for pickup alongside items like espresso drinks and cold brew concentrate. “We had this order-ahead infrastructure, we have these café spaces and we also have all these specialty food vendors we work with. So while you go to the grocery store and may not be able to find rice, all of our vendors have too much rice.” The system pays their vendors, who’ve seen most of their customers go dark, while adjusting to meet the needs of their immediate community.

Coffee shops around the country are following similar models, adding grocery items to their offerings or adapting their own: Durham-based Counter Culture began selling their beans in 5-pound bags online, while Arkansas’ Onyx Coffee Lab now offers a “big gulp” large-format latte prepackaged in a milk jug and Portland, Oregon’s Never Coffee Lab bottles four-packs of their famed lattes, both for local pickup. Charlotte, North Carolina’s Not Just Coffee recently launched an initial limited run of half-gallon iced lattes, and Greenville, South Carolina-based Methodical Coffee also transitioned to offering jugs of cold brew horchata and coffee. Even with its café doors closed, Tandem launched the Beneficial Biscuits initiative: For a minimum donation of $5, the roaster shares a video recipe for its biscuits from its James Beard Award-nominated baker Briana Holt, with 100 percent of proceeds going to furloughed employees.

Increased online sales, rising coffee subscription service memberships, app-based orders, creative fundraising, and social media initiatives combined may have given many roasters and shops a platform to survive on for now, but the future remains uncertain. Out-of-home consumption has dropped precipitously, and supermarket data suggests panic-buying resulted in a likely unsustainable coffee-demand spike. Reduced household incomes and ripple effects down the supply chain will likewise impact the future of specialty coffee in unknown ways. It’ll be a new world out there, and many are wondering how their well-loved communal feel will look once shops officially reopen—if they’re able. “We’re still trying to visualize it,” Pratt says. “It’s not going to be like, come June 1, we’re back to normal and everyone is one foot apart. It’s not going to be like it was, we know that. Society’s going to be a little different, I think.”

Intelligentsia’s McLaughlin agrees. “I think the question we’re grappling with now is, how long is this going to go on and how do we safely re-open? Not only for our baristas, but also for the communities. We don’t want to be a place where we’re doing harm, because my gut [feeling] is this is going to last longer than any of us wants it to.”