Meet Our 2016 Cocktail Bar of the Year: Lost Lake Chicago 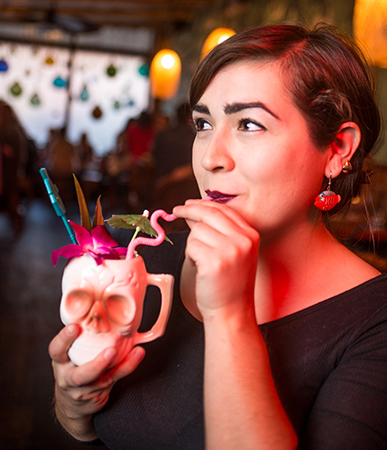 You might not notice Lost Lake upon first arrival at the barren corner of Kedzie and Diversey in Chicago’s Logan Square neighborhood, but behind the building’s stark exterior resides one of America’s best cocktail bars. Lost Lake is a tiki bar, but thanks to the strengths of partners Martin Cate (Smuggler’s Cove, Whitechapel) and Paul McGee (Three Dots and a Dash, The Whistler)—who opened the bar with Land and Sea Dept.—it isn’t just about tiki drinks. The Lost Lake experience combines the best in hospitality and drinks with fun and relaxing escapist vibes.

“Our main goal is to distill the original spirit of Don’s Beachcomber Cafe down to its very essence and stay true to that,” McGee says. “Tropical, escapist, fun, delicious, friendly and different from other bars in the neighborhood.”

The menu has only changed once since the bar’s debut in early 2015, but with the release of the most recent compendium, McGee and his team hit their creative stride. The mix of classics and modern drinks hold to the expected tropical framework, but many of the new recipes tip the scales of the genre, showcasing unexpected ingredients like sherry, whiskey, gin and agave spirits. And while the drinks reign supreme, Lost Lake would largely be a pretty façade without its powerhouse staff. Most of the crew was trained by McGee at Three Dots, and they excel at mixing large-format “drinks to share” during peak hours. And for some the success of the bar is also a family affair—McGee’s wife Shelby Allison and her bartending brothers, John and Andy, all play a role in making sure Lost Lake remains one of the most hospitable, quality-driven bars in the country.