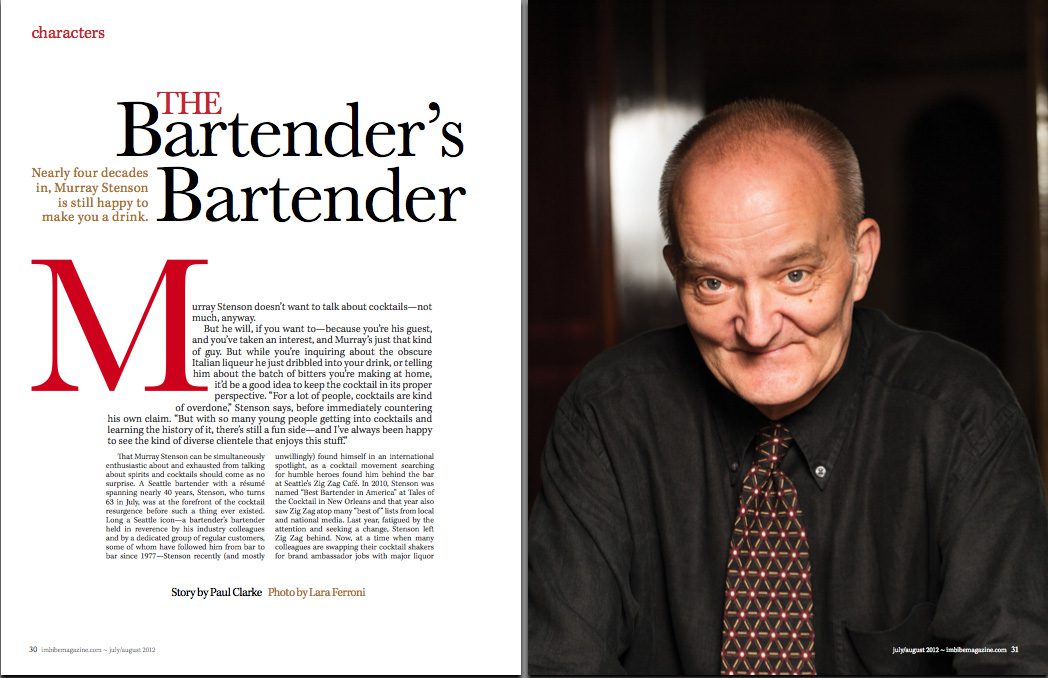 Murray Stenson doesn’t want to talk about cocktails—not much, anyway.

But he will, if you want to—because you’re his guest, and you’ve taken an interest, and Murray’s just that kind of guy. But while you’re inquiring about the obscure Italian liqueur he just dribbled into your drink, or telling him about the batch of bitters you’re making at home, it’d be a good idea to keep the cocktail in its proper perspective. “For a lot of people, cocktails are kind of overdone,” Stenson says, before immediately countering his own claim. “But with so many young people getting into cocktails and learning the history of it, there’s still a fun side—and I’ve always been happy to see the kind of diverse clientele that enjoys this stuff.”

That Murray Stenson can be simultaneously enthusiastic about and exhausted from talking about spirits and cocktails should come as no surprise. A Seattle bartender with a résumé spanning nearly 40 years, Stenson, who turns 63 in July, was at the forefront of the cocktail resurgence before such a thing ever existed. Long a Seattle icon—a bartender’s bartender held in reverence by his industry colleagues and by a dedicated group of regular customers, some of whom have followed him from bar to bar since 1977—Stenson recently (and mostly unwillingly) found himself in an international spotlight, as a cocktail movement searching for humble heroes found him behind the bar at Seattle’s Zig Zag Café.

In 2010, Stenson was named “Best Bartender in America” at Tales of the Cocktail in New Orleans and that year also saw Zig Zag atop many “best of ” lists from local and national media. Last year, fatigued by the attention and seeking a change, Stenson left Zig Zag behind. Now, at a time when many colleagues are swapping their cocktail shakers for brand ambassador jobs with major liquor brands—and at an age when other workers have an eye on retirement—Stenson is still a working bartender and he’s even contemplating opening his own bar in Seattle, possibly as early as this year.

For Stenson, cashing in on his reputation as a veteran bartender and a skilled creator of imaginative drinks probably wouldn’t be difficult, but he says it’s just not the path for him. “I’ve never been asked to be a brand ambassador, and even if I was asked, I don’t think I would,” he says. “I enjoy being behind the bar. That’s where you meet all the really interesting people.”

Wiry and restless, Stenson seems always in motion, even when relaxing on a bar stool with a Campari and soda (despite, or perhaps because of, his reputation as a master of mixology, Stenson’s personal tastes skew to simple drinks and assertively flavored spirits). Stenson took his first shifts behind the bar in the mid-1970s, and through the following decades, he hopped from one Seattle restaurant or bar to another, amassing industry connections and regular customers along the way. In the early ’90s, he began an almost decade-long stint at Il Bistro, an Italian restaurant semi-hidden beneath Pike Place Market. Soon after leaving that job, he took the head bartending position at Zig Zag Café in 2001, a spot he held until leaving last year to eventually settle at Canon, an ambitious cocktail bar owned by Jamie Boudreau in Seattle’s Capitol Hill neighborhood.

Though his career started in the ’70s—arguably the dullest decade for drinks in American history—Stenson’s time behind the bar coincided with major shifts in the way we drink, beginning with the craft beer boom in the ’80s, through the rise of single malt scotch and small- batch bourbons in the ’90s and culminating with the cocktail revival in the new century. And while Stenson claims he’s merely benefited from fortuitous timing, his résumé reflects the impact he’s had on the drinks scene: during his tenure at Il Bistro, he turned a quiet restaurant bar into a renowned single-malt destination; at Zig Zag, he introduced a generation of drinkers to obscure classic cocktails and accumulated a spirits selection so formidable that visiting bartenders were known to snap photos of rare bottles; and at Canon, he introduced his experience as a virtuoso at the delicate art of crafting bespoke cocktails into a bar with all the barrel-aged bells and whistles of the current cocktail scene. “When I started back in the ’70s, the only things you needed to be a bartender were a pen, a wine opener and a cigarette lighter—and maybe a basic knowledge of cocktails,” Stenson says. “You don’t need the lighter anymore, and now, even if you can’t recall the details of a particular drink, you’ve got a customer looking it up on their iPhone, telling you, ‘This drink was made in 1891 …’.”

Even though well-considered cocktails were somewhat out of fashion in the early years of Stenson’s career, he took an interest in the craft and began tinkering with recipes behind the bar, substituting ingredients and working with more obscure spirits and liqueurs—though in those pre-cocktail renaissance days, these experiments were sometimes driven more by necessity than by an adventurous spirit. Stenson tells of a now-defunct bar he worked in during the ’80s, where the bar manager’s drug habit siphoned cash from the till, meaning the bar was frequently out of staple ingredients. “We’d run out of wellvodka or something, and you’d move the next available bottle into the well, moving up the line into top-shelf spirits, and eventually you’re pouring anything you can find,” he says. “Someone would come in and order an Irish coffee, but you’re out of Irish whiskey—so you’d have to try to figure something out.”

It was also around that time that Stenson started collecting out-of-print bar guides and books that featured cocktails more alluring than those found in the Sex on the Beach–era of mixology—books such as David Embury’s The Fine Art of Mixing Drinks, and an obscure recipe collection from 1949 called Bottoms Up by Ted Saucier. These books listed drinks and ingredients that, in many cases, Stenson had never come across and might never have worked with had Ben Dougherty and Kacy Fitch, the co-owners of Zig Zag, not offered Stenson a job. The head bartender spot came with the promise that Stenson could run the bar the way he liked, featuring the whiskies he’d become known for at Il Bistro alongside cocktails such as the Last Word, a drink from Saucier’s book that likely hadn’t been prepared in half a century, which Stenson added to an early menu and, over the years, has spread to cocktail bars around the world.

Through it all, Stenson kept the cocktails in perspective. A creative drink menu and expertise behind the bar may bring customers through the door, he says, but showing them a good time and creating a convivial atmosphere in the bar is what keeps regulars coming back for years.

Though it’s only been somewhat recently that Stenson’s reputation has become global, Seattle bartenders have long recognized his influence. “Murray took it all seriously—the profession of tending bar,” says Dan Crawford. A longtime bartender, now retired, Crawford first worked with Stenson in 1977, when they tended bar at Oliver’s in the Mayflower Hotel in downtown Seattle. Crawford says that during the 1980s and ’90s, Stenson was already on a path that celebrated well-made drinks and put new customers instantly at ease. “He was always on a quest about classic cocktails, and about how everything had been dumbed down,” he says. “And he’d use this mnemonic device on customers that meant he’d recognize people and remember who they were and what they drank, even if he hadn’t seen them in years.”

But success has a price. Following his “Bartender of the Year” award in 2010 and the media attention that followed, a crush of curious visitors descended on Zig Zag, temporarily turning the laid-back bar into a crowded, chaotic scene, with a line out front to get inside, and an atmosphere that annoyed Stenson and the rest of the staff. “It turned into this weird thing, like Disneyland,” Stenson says. “There’d be people taking photos in the bar, having me pose with the wife or whatever, and then going off to the next attraction. It was just goofy.”

This intensity was matched with Stenson’s growing concern that the cocktails that had drawn so much attention were stealing the show, and that many of today’s beginning bartenders are more familiar with 19th- century bartenders like Harry Johnson than they are with basic principles of service. “Now, everyone is Harry Johnson, and I’m kind of conflicted about it,” he says. “I was lucky to get in when I did, because the emphasis was on hospitality and product knowledge; now, you need the product and recipe knowledge, but hospitality is kind of in the back seat.”

As Stenson now considers the next stage of his career—consulting with bars and restaurants around Seattle and potentially opening his own place in the near future—he’s in a position to utilize his nearly 40 years of bartending experience to create exactly the kind of bar he thinks the city needs. “You’ll be able to have a life-changing cocktail, but I see bars as coffee shops that serve alcohol—you should be able to come in and have something simple like a Gin and Tonic, and not feel obligated to order something fancy,” he says.

Ryan Magarian, co-founder of Aviation Gin and partner in Oven and Shaker restaurant in Portland,Oregon, worked in Seattle early in his career and has long recognized Stenson as a role model for other bartenders. Magarian says that after decades of working behind the bar, Stenson deserves every accolade that’s come his way. “He represents what we’d all love to see on every corner, in every bar: someone who genuinely cares about your experience, and beyond that, has a great knowledge of everything about drinks,” Magarian says. “We’ve created a deity out of this guy for a specific reason, but he’s so much bigger than the box we put him in.”