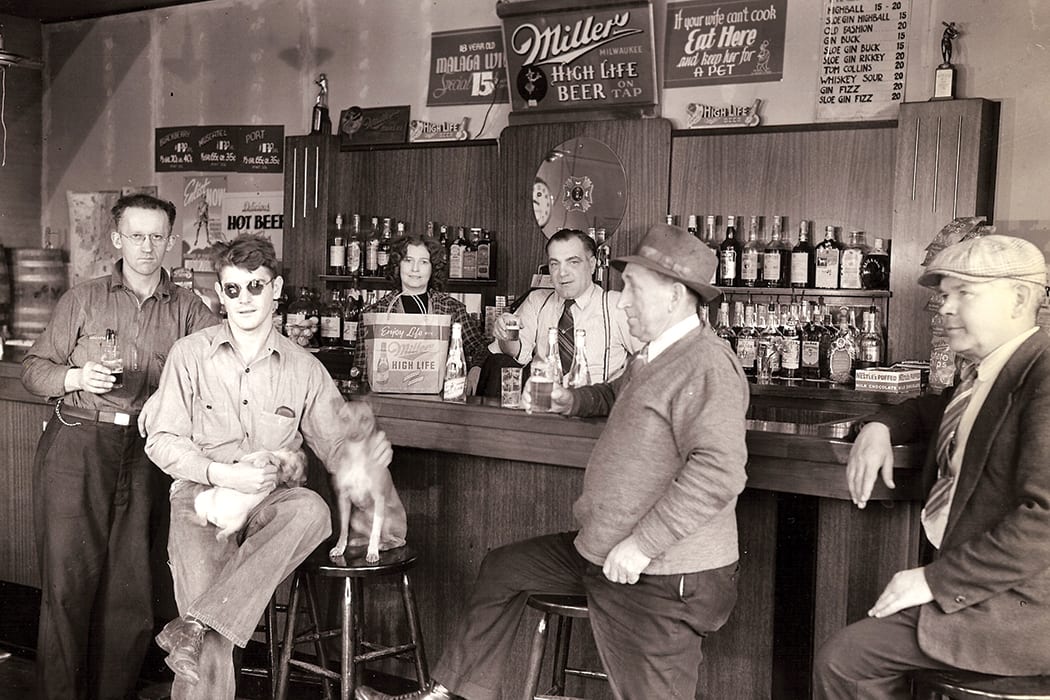 Not much is known about Bryant Sharp. His brief obituary in the Milwaukee Sentinel states that he died in 1959 at the age of 61. He was, the obituary noted, the “owner of a cocktail lounge” in Milwaukee.

What it doesn’t mention was that Sharp had a stubborn contrary streak—and he left one enduring bit of evidence to support that notion. In a quiet residential neighborhood, he did one of the most contrary things imaginable in a city famed as America’s Beer Capital—home of Pabst, Schlitz, Miller and Blatz. In 1936, Sharp bought a venerable beer bar, which had by then been open more than a half-century. Two years after buying it, Sharp closed it for a remodel. When it reopened, Bryant’s was no longer a beer bar and no longer had its iconic wood stove in the middle of the room. It emerged pupa-like, as Milwaukee’s first and swankiest freestanding cocktail lounge.

Bryant’s Cocktail Lounge, as it’s now known, opened in a nondescript white gabled building in a neighborhood populated largely by Polish émigrés and their descendants. From the outside, it looked like it could be the home of an elderly couple that ran a butcher store on the side. But inside, it was dusky and dark, lined with custom banquettes, shaded with modern Venetian blinds and featuring a streamlined curved bar lined with upholstered bar stools. Beer was relegated to a supporting role; fancy cocktails took center stage.

Sharp, who was said to have been bored by beer, embraced the modern cocktail culture then emerging, and his successors carried the same flag onward. The place became especially known for crafting boozy ice-cream drinks. (“It’s a Wisconsin thing,” says current owner John Dye.) Bryant’s found some fame for the Pink Squirrel (made of equal parts crème de noyaux, crème de cacao and heavy cream), which, according to the unanimous proclamation of the internet with no supporting documentation, was invented by Sharp in 1941, possibly for a Bols cocktail competition.

Bryant’s continued to follow the cocktailian path the founder had blazed, even after his death. In 1971, a fire gutted the place. The then-owner, Pat Malmberg, could have walked away with insurance money—instead, he rebuilt, making it even swankier than before. He replaced the music system with an upgraded McIntosh Hi-Fi for $21,000, and he had a gold-plated mechanical cash register made to replace one that had melted in the inferno. He had welders custom build a three-tier steel liquor rail that could hold 250 bottles out of view—not a single bottle was displayed on the back bar. His cocktail list grew and grew.

Bryant’s continued to quietly serve the neighborhood under a succession of owners, but then, as will happen, the neighborhood coarsened, the bar slipped, and it was put up for sale a few years ago.

John Dye was the first to look at it. He was a transplant from Seattle and had done stints behind various bars since he was 21. He moved to Milwaukee to pursue a Ph.D. in architecture but left the program after three years. He liked the bartending lifestyle, but he wondered: “Do I want to make this my life?” No, was his initial answer. But then the bar just sat forlornly on the market, and Dye began to think otherwise. “It’s really an institution here,” he realized. “If somebody else buys it, it may never be the same.”

He took the leap. His goal? To maintain it much as it had been, if not more so. “We’ve done a few minor things, but nobody noticed, and to me that’s a success,” Dye says. He also expanded and improved the drinks program, bringing it in line with the higher expectations raised by the recent cocktail renaissance. (And earning it a spot on Esquire’s Best Bars list in 2012.)

Dye inherited not only a lovely, dim bar with an awesome hi-fi that today plays Al Green and Frank Sinatra to the sounds of Boston shakers, but also a Rolodex with nearly 500 drinks, many created by the bartenders who preceded him. He’s been working his way through this inherited liquid chronicle, featuring some lost favorites as “cocktails of the month,” including the Amelia Cocktail, named for the famous pilot who disappeared shortly before Bryant switched to mixed drinks.

Sharp never proffered a cocktail list to customers, and Dye continues this nontradition. He says about one in five customers comes in knowing exactly what they want. He sells a lot of Brandy Old Fashioneds and, of course, Pink Squirrels. (“Oh, a ton,” he says.) When customers look in vain for a menu, the bartenders guide them toward a suitable drink, asking about likes and dislikes. Then they might consult the Rolodex to ensure the perfect match.

Authenticity is the peak that every establishment strives to summit these days. But authenticity can’t be manufactured. It comes through time, slowly, like whiskey aged in a barrel.