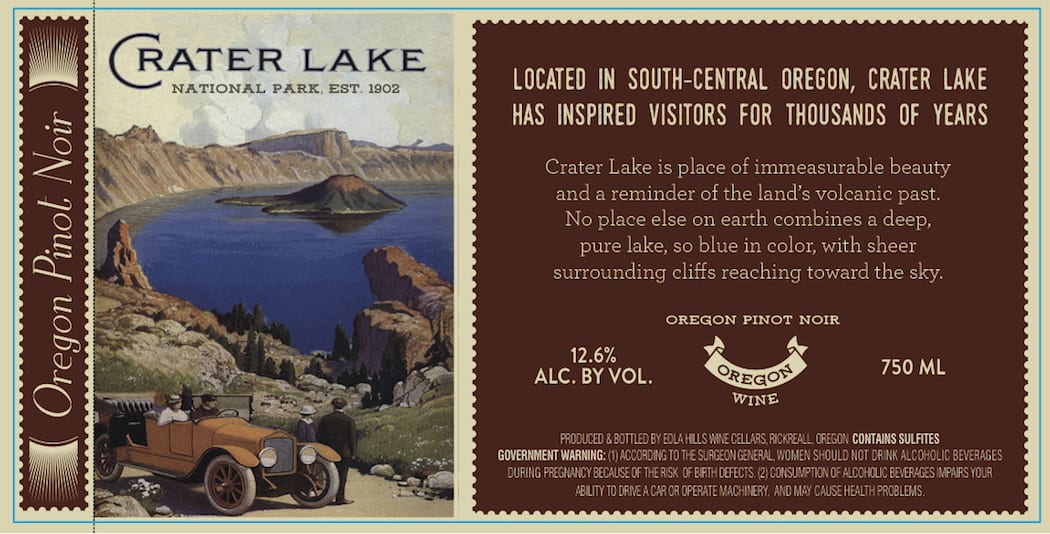 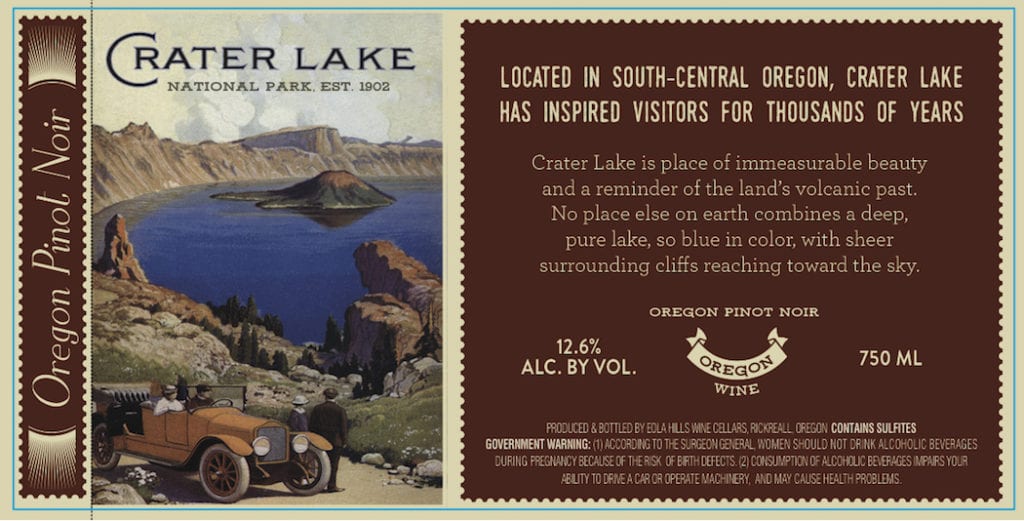 In 1935, as America was still reeling from the Great Depression, there was a collective need for escapism. But exotic vacations required money, so President Roosevelt’s Works Progress Administration—the most ambitious of his New Deal initiatives—built up the beautiful wildernesses situated just a road trip away. Better still, it did so with the grace and taste of a master painter. In some ways, the posters advertising the parks were as much a source of escapism as a trip itself. This was the golden era of propaganda pieces, and collectors have coveted the artworks since.

This era inspired Eola Hills Winery to re-create the look and feel of those vintage posters for their wines that are poured in Crater Lake National Park. While the labels—designed by Rachel Tourville of Graphic Lime—have undergone facelifts over time, the newest version (pictured above) depicts a group of sightseers overlooking the majestic lake, having just parked what appears to be a Model-T in order to truly absorb the scene.

Kylie Huggins, Eola’s sales manager and daughter of founder Tom Huggins, first spotted the image online, sparking a research path that led her to Olde America Antiques in Montana, a place specializing in old ephemera and custom quilts. Jack Davis runs the shop and is credited for sniffing out the original physical image. The avid collector tends to hold on to treasured finds with the hopes of someday reproducing them himself. He says this particular image is a brochure cover published by the Southern Pacific Railroad sometime between 1916-1930. He found it at a railroad memorabilia show a while back. “It’s ironic that the railroad would publish an image of an early auto at Crater Lake,” Davis says. “This was the beginning of the end of the dominance of railroad transportation to and from National Parks,” he says.

Up to then, prominent lines like Union Pacific, Santa Fe and Great Northern all produced exquisite posters, brochures, post cards and other media to lure folks onto trains to explore the country—especially the American west. According to Davis, many employed the “poster style,” which used smaller-format images to create the impression of looking at a large poster from distance.

Motorized transportation within National Parks was legalized in 1916, the same year the Park Service was created. The advent of the automobile cut into locomotive tourism, but the popularity of the Parks only increased. Fortunately, the WPA and other agencies mimicked these stylish early travel ads and the revivalist movement continues today, meandering all the way to wine, beer and spirit labels.

As for the wine, the Eola Hills Pinot Noir offers red fruit and mild tannins, with an austere charm typical of the 2013 vintage. Three other Eola wines currently wear the throwback label—the Chardonnay, Pinot Gris and Cab—with the same image displayed, but a different border color to demarcate each style of wine. In honor of the 100th anniversary of the National Park Service, they’re being poured exclusively at Crater Lake Lodge in Oregon’s only National Park, and they may enter a limited retail market soon. This calls for a road trip.