Do Robots Have A Job At the Cocktail Bar? 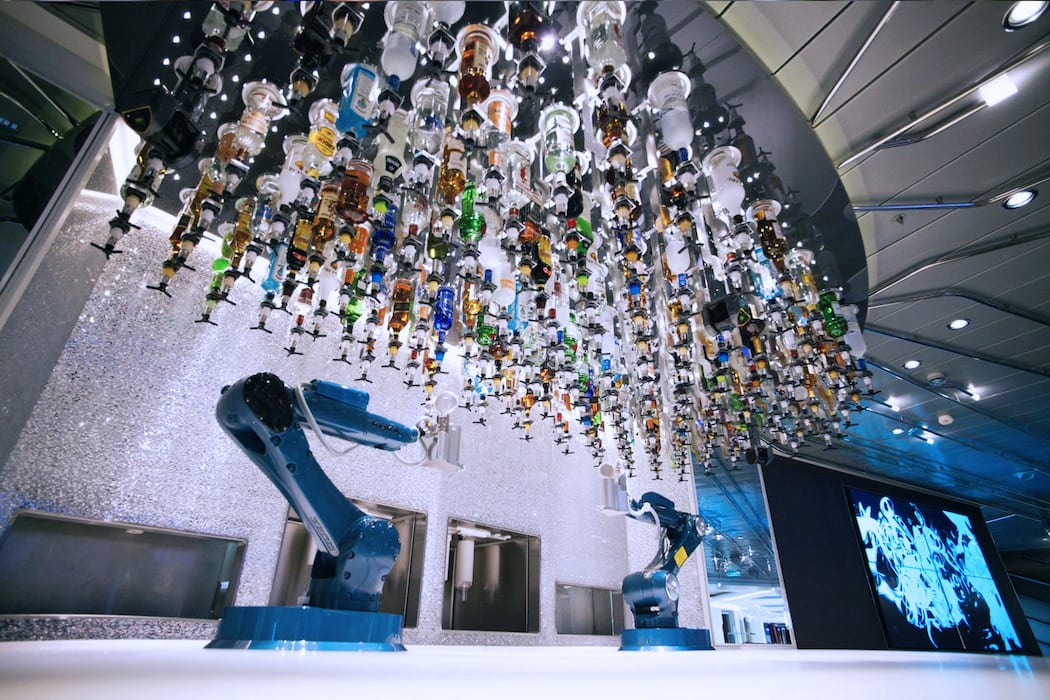 “This job is not what you think it is,” says Jennifer Colliau matter-of-factly. “You think this job is making drinks? It’s 10 percent making drinks.” Colliau, beverage director at San Francisco’s The Interval at Long Now and a veteran of the industry, delivers this disclaimer to newbies behind the bar. She goes on to explain that bartenders are generally responsible for a variety of essential tasks, from verifying a person’s age and gauging sobriety to ensuring that guests are enjoying themselves—all of which requires a decidedly human touch. But what if that 10 percent of the process could be performed with an efficiency or accuracy beyond the capabilities of a human bartender? As we featured in our September/October 2017 issue, automation in the coffee industry is already becoming more common in cafés, so will the cocktail bar be the next technological frontier?

The Interval is not a typical bar. As a project of The Long Now Foundation, which focuses on fostering long-term thinking and responsibility for the next 10 millennia, The Interval is a showcase of gadgets and technology like a prototype for the 10,000-year clock and a digital painting that functions on an algorithm to constantly evolve through a myriad of designs. So it seems fitting that now, behind the bar, they have a robot. Although, it’s probably not what you’re picturing. “I think of it like a soda gun 2.0, with effortless repeatability and customization,” explained Pierre Michael in a panel discussion on robotics in bartending at this year’s Tales of the Cocktail.

Michael is the co-founder and CEO of Party Robotics, which created the machine, dubbed “Bartendro,” for The Interval. Bartendro looks more like the control panel of a space ship than an actual robot; think more 2001: A Space Odyssey and less Jetsons. A lineup of peristaltic pumps are connected via tubing to the bottles below containing botanical distillates, and through a simple iPad interface, the machine can create any specific mixture desired, with precision down to the milliliter. “I started bartending 20 years ago; I did not learn with jiggers,” says Colliau. “But now, of course, we jigger everything. I test the accuracy of my staff with graduated cylinders, and even with a jigger you have several milliliters up and down from your target all the time. So looking at this technology, that is something that a robot can do better than a bartender.”

At The Interval, Bartendro gets put to work making gin (or botanical vodka should you nix the juniper) by pulling from individual botanical distillates made by St. George Spirits and mixing them to order in a near-infinite number of possibilities, just as it could with standard cocktail ingredients.”My first thought was a martini robot, where you could have all different kinds of gin and vodkas and vermouths,” says Colliau. “But one of the problems with that is I think a lot of people don’t understand martinis, so people always think they want them very dry. We’d just end up serving a bunch of straight gin or vodka, and then it’s like, ‘Okay, what was the point of this robot?'”

The idea to make customized gin was inspired by the Austrian gin Reisetbauer, which is made by distilling all the botanicals separately. “I love that idea—they are calibrating a spirit after the fact, rather than calibrating what goes into the still,” says Colliau. Want something bright and floral? Bump up the citrus and maybe add some lavender. Prefer something herbal or spicy? Tinker with the levels of coriander, anise or even cucumber. “Once we went down the path of this robot, I realized that was something we could do.”

At The Tipsy Robot in Las Vegas, bartenders can shake cocktails, muddle ingredients and even dance to the music in their downtime. They also happen to be a pair of standalone robotic arms, using technology created by the Makr Shakr company, designed by Italian firm Carlo Ratti Associati and first implemented on Royal Caribbean cruise ships.

In New York City, Lantern’s Keep bartender Daniel Rutkowski partnered with Austrian company Print a Drink and Auchentoshan Single Malt Scotch to create the world’s first 3D-printed cocktail. Developed by Benjamin Greimel at the new creative robotics laboratory at the University of Arts and Design Linz, the process utilizes a KUKA LBR iiwa robot to create a suspended, three-dimensional pattern within the cocktail itself. While the process still requires a human bartender to create a recipe with very specific guidelines, it is another hint toward the possibilities offered through automation. “I think that the use of automation is interesting when it allows us to generate new experiences,” says Carlo Ratti, founder of Makr Shakr and principal architect and engineer. “Makr Shakr can help us explore how people might embrace the new possibilities offered by robotics and digital manufacturing. For most of [our] customers, this is the first time they get to see and control a real, industrial robot.”

While at the moment the fully automated bars by Makr Shakr may seem more novelty than anything else, they represent both what is possible and what is feared as automation becomes more present in our lives. Ratti himself takes a pragmatic view. “We should all be concerned about losing our jobs because of robots and AI … but as American historian Lewis Mumford wrote in the 1930s, the major benefit of mechanization is not the removal of work, rather the substitution of a job with something more creative.”

At Party Robotics, Pierre Michael is quick to acknowledge the essential role of the bartender as the curator of the experience while still extolling the benefit of automation as both a workhorse and a curiosity. “Machines that help bartenders perform their jobs better in a way that isn’t visible or distracting to the user will have a lot of appeal,” says Michael. “On the other side, I think there will always be technophiles who want to interact with the technology directly. As robots increase around us, it will be interesting to see which interactions people prefer most—the unseen robots behind the bar or the ones that they can interact with themselves. Until we have that data, I believe there’s certainly room for both.”