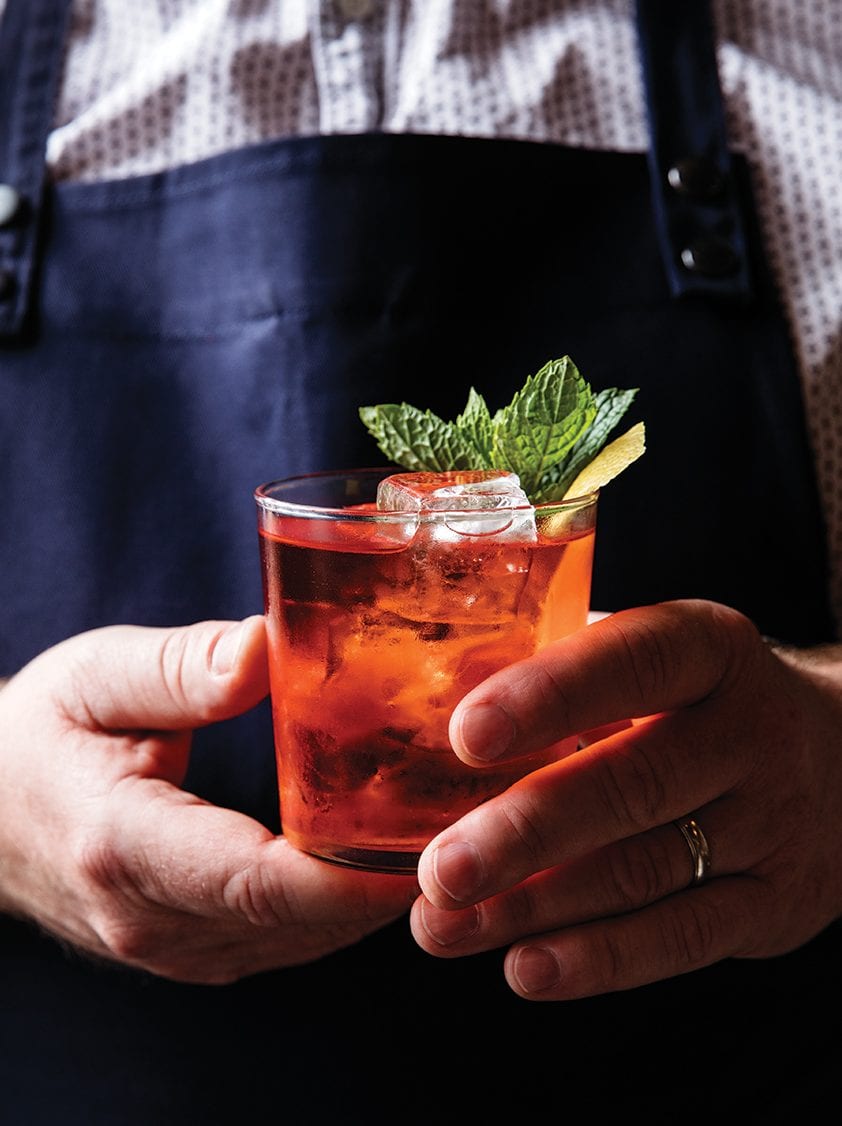 We’re at Petworth Citizen & Reading Room, a low-lit restaurant and bar in Washington, D.C. Nestled into dark shelves, floor-to-ceiling books have been meticulously color-coded to follow the sequence of a rainbow. A woman with dark hair and rounded cheekbones approaches, placing a menu gently on a tall table. She’s Chantal Tseng, and she’s converted this one-time lending library into a weekend drinking den where literary works and their authors inspire the selection. If it’s Roald Dahl week, then we can select The Witches, a mix of green Chartreuse, manzanilla sherry and Linie, an aged Norwegian aquavit. Stirred and strained into a coupe, the drink is then garnished with a lemon peel and a sprig of dill. With a zealot’s knowledge of spirits and liqueurs, Tseng excels at combining seemingly disparate flavors into a rounded whole. And she loves aquavit—a passion, she admits, not everyone shares. The trouble comes with misconceptions. “People think it’s sweet; people think it’s bad,” Tseng laments. And when a drink’s description includes “aquavit,” it’s almost always ignored. “To get people to drink [aquavit], I have to talk about it,” she says.

Tseng tells customers to think of aquavit like gin. Both spirits start as a more or less neutral spirit, which is then “seasoned” with strong flavors, the most prominent of which is juniper in gin’s case, and caraway for aquavit. Drinkers who take a chance on aquavit discover a spirit with a light but appetite-inducing savory quality—a varied and versatile ingredient to sub in cocktails for gin, vodka and—in the case of aged versions—whiskey and rum.

So why have we been so slow to embrace it? Aquavit has been around for 500 years, after all. Today there are more than 11 million Americans with Scandinavian heritage, descendants of those Northern European immigrants who arrived here around the turn of the 20th century, most of them accustomed to a drink of aquavit now and again, at least during the holidays. More than a decade ago, the first contemporary domestic aquavits—Krogstad, from House Spirits in Portland, Oregon, and North Shore Distillery’s Private Reserve in Libertyville, Illinois—introduced aquavit to the U.S. craft distilling scene. And it’s been eight years since Jim Meehan published The PDT Cocktail Book, which includes six aquavit recipes, five of which call specifically for Krogstad. But most cocktail bars carry just one or two aquavits, if they carry any at all—and many of these bars are the same venues that introduced today’s American drinkers to Negronis, rhum agricole, mezcal and maraschino liqueur.

Which puts aquavit in a predicament. Can this esoteric spirit—for years marketed almost exclusively to nostalgic Scandinavian expats—break through to join the recognized ranks of prized cocktail ingredients? Or is it destined to languish forever in Upper Midwestern church basements, the smell of lutefisk hanging heavily in the air?

In 2002, Minnesota ski instructor Mike McCarron traveled to Ísafjörður, a small city in the Northwest Fjords of Iceland, to coach the local cross-country club. One afternoon, McCarron knocked on the door of the neighboring apartment, then occupied by a Danish schoolteacher, who’d invited McCarron to sample the Danish-style lunch buffet known as a smørrebrød. McCarron recalls sausages, pumpernickel bread, three types of herring, and “several smelly cheeses.” Also, Carlsberg beer and an aquavit flavored with dill. “We had a great afternoon,” McCarron remembers. “We were skål-ing each other and telling stories.”

McCarron resolved to re-create this experience when he returned to the states—an easy task, he figured, given Minnesota’s significant Scandinavian heritage. But back home, even the big box liquor stores came up short. Eventually he scored a bottle of Linie, the same Norwegian aquavit Tseng mixes into The Witches cocktail. “And it was nice, but it wasn’t dill aquavit,” he says.

Years went by, and the memory of that aquavit endured. In 2011, the craft-spirits renaissance was fully underway, and bars filled up with locally made vodkas, liqueurs and whiskey—yet still no dill aquavit. Just across the border from Minnesota in New Richmond, Wisconsin, Scott Davis at 45th Parallel Distillery was making vodka, gin, bourbon and rye. One day, McCarron approached Davis with the idea, and together they took to the still. “Our early batches tasted like bathtub gin,” McCarron recalls.

When they realized the fresh flavor they wanted required locally grown dill weed, their aquavit suddenly became a seasonally produced spirit, further complicating things. Then, about a year in, Davis sent McCarron a one-line email from the distillery: “You’re going to want to try this.” Fresh, smooth and worthy of that long-ago afternoon in Iceland, Mike McCarron’s ideal aquavit had finally materialized. He named it Gamle Ode—an ode to the old—and was soon sharing samples at events and in 45th Parallel’s new tasting room.

When it comes to selling aquavit, McCarron is lucky to be in Minnesota, where an understanding of, and appreciation for, Scandinavian tastes endures. Take lutefisk—a dish of air-dried, preserved fish that’s been rehydrated in lye and then soaked for a day and boiled into jelly before serving. Lutefisk’s off-putting odor and wiggly texture are legendary. It’s a survivor’s dish—a dish to be saluted with a strong and bracing beverage.

Nobody eats lutefisk in Scandinavia anymore—but in Scandinavian-American communities in Minnesota, they do. The taste can’t explain it, but nostalgia can. Huddled in Lutheran church basements and gathered around Christmas-day buffets, they dip their forks into the pungent preparation that kept their forebearers alive. And then, at the prompting of their host, they raise a tiny stemmed glass of aquavit, its wee bowl frosty from the icy liquid inside. In no hurry, they make eye contact with everyone around the table—then loudly and in unison, they bellow “skål.” One more round of eye contact, and the glass returns to the table. In Minnesota, they like to remember.

This type of remembrance plays out in sales, says aquavit enthusiast Jacob Grier, a spirits consultant who tends bar at Multnomah Whiskey Library in Portland, Oregon, and who founded the now-international Aquavit Week. “We have a ton of liquor store sales in Minnesota,” Grier says. “Which suggests to me that it’s families from Scandinavian heritage buying aquavit and taking it home. Whereas if you’re in a place that doesn’t have that heritage, it’s cocktail bars.”

Most places across the U.S. fall into the latter category. So as a result, domestic aquavits—which today number in the dozens—tend to be richer and more aggressively flavored than their old-world ancestors, so they can hold their own in cocktails. And newcomers, like Brooklyn-based Svöl, market themselves expressly as cocktail ingredients. If aquavit is to thrive, it seems, bartenders will need to do the heavy lifting.

On the shores of Washington state’s Shilshole Bay lies Ballard, a one-time working-class fishing village (and now a booming Seattle neighborhood) that formed the heart of the region’s Scandinavian heritage. In the late 1800s, thousands of Swedish and Norwegian fishermen and loggers immigrated here with their families. Between shifts, they’d flock to Ballard Avenue bars for an ice-cold belt of aquavit. Their presence was powerful along these brick- lined streets as recently as the early 2000s, when Brady Sprouse was pouring pints at Hattie’s Hat, an old-school bar and diner known for its aquavit Bloody Marys. Bartenders poured straight from the aquavit bottle back then—to both locals and occasionally the transient dock workers who stayed in rent-by-the-week rooms across the street. “That kind of thing just doesn’t exist anymore,” says Sprouse. “You’ll still see the second-generation Scandinavian Ballardites come around every once in a while, but they don’t come around nearly as much as they used to.” Whiplash gentrification has transformed the neighborhood—today, that hardscrabble hostel is a boutique hotel for tourists.

Yet some traces of that heritage still pop up. In 2013, a neighborhood resident who goes simply by Lexi paid homage to Ballard’s past with an aquavit-only distillery, Old Ballard Liquor Co., though it shuttered six years later. Until recently in the nearby Interbay neighborhood, Sound Spirits also made aquavit—along with gin, whiskey and liqueurs.

In Portland, the spirit has made inroads in the local cocktail scene, thanks to Grier’s aquavit evangelism as well as the versions made by local distilleries like House Spirits and the nearby Rolling River Spirits, which makes eight aquavit styles. The popular Broder restaurants—Broder Café, Broder Söder and Broder Nord in Portland, and Broder Øst in Hood River—wave the flag for Scandinavian (and Scandi-style) spirits, as well. The restaurants claim to have the West Coast’s largest aquavit selection, mixed in original cocktails as well as in aquavit-leaning variations on classics like the Sazerac, the Negroni and the Bee’s Knees. And the lively herbal flavor of Broder’s aquavit-based Bloody Mary has made it a Portland brunch standard.

These aquavits pay homage to a time when real estate prices hadn’t turned modest residential streets into well-to-do enclaves, and many of the first- and second-generation Swedes and Norwegians here had yet to claim their seat at the great smörgåsbord in the sky. While some Scandinavian touches endure in Ballard— the Nordic Museum recently moved to an impressive new building, and the Syttende Mai Parade, the spring celebration of Norwegian independence, still draws a crowd—these preservation efforts feel like lovingly erected sand walls built to hold back a tsunami.

What’s left to hold onto here is Barnacle, the brightly tiled amaro and aperitivo bar that Sprouse manages, and drinks like Shock Me Like an Electric Eel, an ode to a Spanish gin tonica with gin, aquavit, three amari, celery and elderflower, and the Ballardvardier, a classic riff that taps the taste of Scandinavia. In these drinks, the Nordic spirit—with its notes of dill, coriander and caraway—shines. But its aromatics don’t overpower—instead, they insist, stubbornly, that you pay attention. And long after the last sip disappears down your throat, its memory endures.

Jessica Voelker
Jessica Voelker is a Seattle writer with an affinity for sushi and gin martinis, preferably consumed contemporaneously. She began writing and reporting at People, served as a staff editor at Seattle Met and Washingtonian magazines, and currently works with the James Beard–award winning team at ChefSteps, a cooking and technology company in Seattle. Her work has appeared in Condé Nast Traveler, Food Network magazine, Portland Monthly, and of course Imbibe.