A Conversation with André Mack 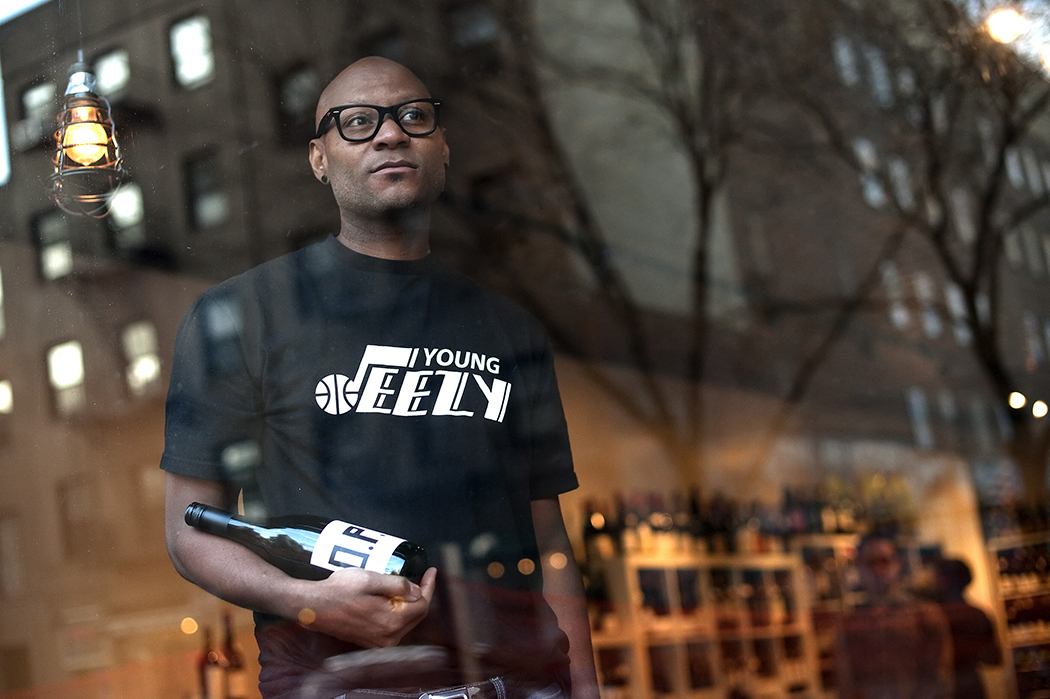 André Mack’s career has taken a varied and unusual path. A former sommelier for Thomas Keller at both The French Laundry and New York’s Per Se, Mack founded his own wine label, Mouton Noir, in 2007. In the process, he designed his own labels and branding and eventually launched his own design agency Get Fraîche Cru. He recently took some time to chat with us about his tongue-in-cheek approach to winemaking, design and the merits of being an outcast.

Imbibe: When you initially left your day job with Citicorp to pursue a career in wine, did you have an idea of what you were after?
André Mack: I had no clue. I initially left Citicorp because I missed the instant gratification that I got from talking to people and helping people when I worked in restaurants. I thought maybe I’d go back to school, but working at a desk wasn’t for me. So I went back to work in restaurants. I had worked in places like Red Lobster for like eight years, so it was very familiar to me. But I found myself working at better restaurants with better wine lists, and that’s how it started. I was working at a steak house where we spent two nights tasting through the entire wine list, and it was at that moment that I caught the wine bug. I thought, “I have to know more about this; I have to be involved in this.”

What inspired you to launch your own label, Mouton Noir?
I turned down a job at Charlie Trotter’s to go work at The French Laundry, then I moved to New York to run the wine program at Per Se for three years. I’m an all-or-nothing kind of guy; I decided I wanted to work for Thomas Keller and I gave every waking moment of my life to that restaurant. But I felt like I didn’t have anything left for myself. I wanted to be an entrepreneur and start my own company. At the time it was kind of a joke—my nickname was mouton noir and I kind of ran with that. In between decanting priceless bottles of wine, I would talk sh*t about what kind of wines I was going to make—like, we’re going to make one called “Sho Neuf” and it’s going be my own American version of Châteauneuf-du-Pape… it was basically just a running joke. When I finally said I was going to leave, I wrote an email to everyone I had ever met to let them know I was going to make wine and that it was a pleasure working with them and hopefully our paths would cross again. And lo and behold all of these people started to write back offering resources. And even though I didn’t have any money or a place to make it, and people were like, ‘What the f*ck are you doing?’ I just had to keep saying it until it was real. I got this far.

You founded Mouton Noir wines in 2007; then in 2011 you established Get Fraîche Cru, your design agency. What was the story behind that?
What happened with Get Fraîche Cru is that I started by designing our wine labels. It was something I didn’t really realize I had in me—that it was something I was good at. I didn’t have any money to start [Mouton Noir], and I was dumbfounded to be told that just a medium-sized print was going to be $25,000 per label. So I figured I had all these ideas for the wine labels, let me just get those out of my head. So I got a Mac on Craigslist. I didn’t think I would do it from start to finish; I got the idea out and was waiting to pass it along to the designer and just never did. I really kind of honed my skills making graphic designs for t-shirts, and we sold t-shirts online before we sold any wine. I felt like that was a way for people to become familiar with us. And I figured anyone could just put their label on a t-shirt, so why not make a shirt that other wine people would just love. Who gives a sh*t if they bump the wine or not?

Your labels for Mouton Noir are so distinctive. What informs your design style?
When I was a kid, at the grocery store there was a generic aisle, and everything was black and white. There was no branding, it was just like “beer” or “potato chips,” black on white. But it had a design element in a way; it was modern-looking to me. So the name of the company is Mouton Noir, which means black sheep; that means not doing things the way other people are doing them—embracing what makes you different and using that to make you stand out. And I try to explain to people that we put the money in the wine, not in the packaging. I feel like you can’t judge a book by its cover, that’s always been the story of my life. I can walk into any restaurant and people would be floored to learn that I know what I do about wine, let alone that I ran one of the best wine programs in the world.

Did you start making money from design before you made money from wine?
Well, I was selling wine, but I didn’t make money for many years. I started making a lot more money on t-shirts, and I started to have people approach me who had seen the graphic work and wanting to know who I did it for. And people actually started hiring me to do stuff for them. I had little design chops, but I had big wine chops, so I could make designs that really resonated with my peer group, versus knowing a lot about design but less about wine. And so that worked to my advantage. I started doing some stuff for Charles & Charles, I do some work for Joel Gott, I’ve been on retainer for like three or four years for Palm Bay Imports. It’s always been about trying to combine my passions so that I can use them every day. To be able to use wine as leverage to meet other creative people has been tremendous.

You advocate being an outcast. Why is that?
It’s something that’s relatable to everybody. We’ve all been in positions where we felt out of place or not accepted for whatever reason. For me, that’s been my life. I’ve always been that person that stood out. And what makes you an outcast is what makes you unique, and you should harness that. Being a black sheep gives you creative license to do sh*t differently.