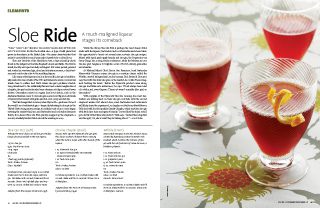 “Wild,” “hard” and “inedible” are hardly selling descriptors for any type of food. But for the humble sloe—a type of wild plum that grows in abundance in the British Isles—the same characteristics that make it unsuitable for snack time make it perfect for cocktail hour.

Sloes are the fruit of the blackthorn tree, a type of prickly shrub found in the hedgerows that line England’s roads and fields. The fruit is small, knobby and spectacularly astringent. But when picked, pricked and soaked in sweetened gin, sloes lend a fruity resonance, a brisk tartness and a rich ruby color to the resulting liqueur.

Like many other liqueurs (such as limoncello), sloe gin is traditionally made at home; outside of the U.K. and Ireland, however, commercial brands have to suffice. And that’s where sloe gin’s problems started: Long abandoned to the artificially flavored and colored neighborhood of spirits, sloe gin has for decades been a denizen of a liquor store’s lower shelves. Generations raised on sugary knock-out drinks, such as the Alabama Slammer, came to view sloe gin as a low-rent liqueur, a formula of mystery fruit mixed with grain alcohol, corn syrup and red dye.

That all changed when Plymouth—producer of one of the world’s most celebrated gins—began distributing its sloe gin in the United States using an 1883 recipe. While the citrusy Sloe Gin Fizz is perhaps the most classic drink made with the liqueur, bartenders and cocktail enthusiasts have taken the opportunity to break out several more esoteric sloe gin recipes. Mixed with equal parts apple brandy and sloe gin, the Depression-era Savoy Tango has a crisp, fruity exuberance, while the Modern #2 uses the sloe gin’s tanginess to brighten a mix of Scotch whisky, grenadine and absinthe.

In San Francisco, bartender Marcovaldo Dionysos mixes sloe gin in a modern classic called the Wibble, created by legendary London barman Dick Bradsell. Dionysos says that with the older sloe gins on the market, he couldn’t have imagined tackling the drink. “Before the Plymouth product came along, sloe gin had fallen into irrelevance,” he says. “It had always been kind of a sticky, red, sweet liqueur. There just wasn’t a quality [sloe gin] on the market.”

As sloe gin cocktails grow in popularity, more bartenders and enthusiasts will likely share the experience Los Angeles cocktail consultant Marcos Tello had with his first quality Charlie Chaplin, which matches sloe gin with fresh lime juice and apricot brandy. “I never liked the drink until I got a bottle of the Plymouth product,” Tello says. “I mixed them together and thought, ‘Oh, this is what they’re talking about.’ ”