Where to Drink in St. Louis 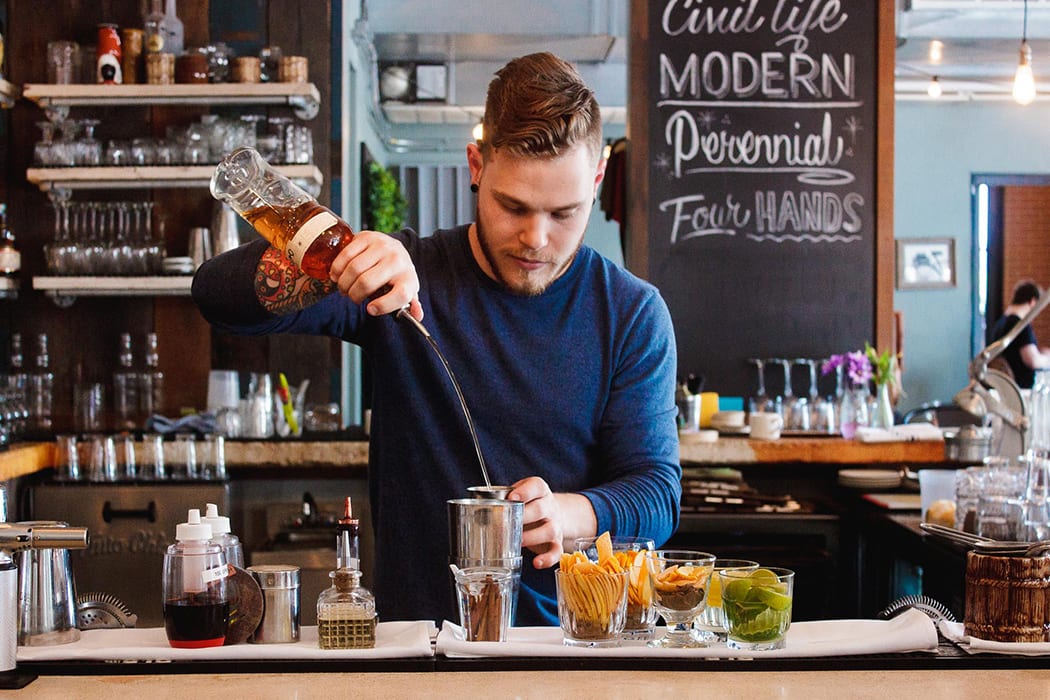 With roots in New York, Denver and Philadelphia, food writer, photographer and recipe developer Sherrie Castellano moved to St. Louis three years ago when her husband started a new job in the city. Thanks to her background in the service industry (in addition to working as a private chef, she also hosts a monthly dinner series called Of All The Places I Call Home), she has a knack for finding a city’s best food and drink spots, so it didn’t take long for her to settle into St. Louis’s fast-growing culinary scene. “The Midwest (and smaller cities in general) is kind of having a moment,” Castellano says. “You can do whatever you want to do and be whoever you want to be here and still live comfortably. And that translates into a burgeoning food and drink scene. The people here are open and ready and embracing it all.” Here’s how a perfect day in St. Louis looks for Castellano.

“I spend a lot of my mornings drinking Americanos and writing emails at Kaldi’s Coffee on Demun, my neighborhood coffee spot,” says Castellano. Named after the Ethiopian goat herder who is said to have discovered the caffeinated effects of coffee in the sixth century, the coffee shop has been sourcing and roasting some of the city’s best beans since 1994. Now, with 18 cafés in St. Louis, Columbia, Missouri, Kansas City and Atlanta, they also supply coffee to smaller Midwestern shops like Verona Coffee Company in Collinsville, Illinois. For non-coffee drinkers, Nashville supplier Firepot Nomadic Tea gets the job done. “Their Iron Goddess of Mercy oolong (hot or iced) is what I’m drinking when I’m not drinking coffee,” Castellano adds.

If Castellano has the morning off, she’s usually spending it at Winslow’s Home. Part restaurant and bakery, part general store, Ann Sheehan Lipton opened the homey destination in 2008 and has spent the last decade racking up accolades for her focus on seasonal and sustainable foods. Sheehan Lipton sources many of the ingredients served at the restaurant (both veggie and meat) from her family farm in nearby Augusta. “Give me their locally-sourced tomato toast on gluten-free bread with burrata, a cold brew and a seat on their patio and I’m good,” Castellano says.

For a palate cleanser between stops, Castellano visits Seedz Cafe, a restaurant inspired by Shel Silverstein’s The Giving Tree. With a focus on 100% plant-based food and drink, the café is located in the DeMun neighborhood, and Castellano usually orders the Coco Mojito smoothie. “It’s a bright and fresh elixir of kale, coconut water, lime and mint,” she says. “It’s good for you, but it tastes like a dream. I could drink it every day.”

“If I’m going out for the night I’m starting at Retreat Gastropub,” says Castellano. Located in St. Louis’s Central West End, the modern-but-comfy gastropub offers fresh takes on American pub food and offers a triple-threat behind the bar with thoughtful selections of local beer, wine and cocktails. “They have a serious bar program with a thoughtfully crafted cocktail menu,” Castellano adds. The drinks menu rotates seasonally, with a focus on aged spirits and fresh produce, seasoned with housemade ingredients. “And they also have great food to get your stomach just the right amount of full before a night of drinks.”

“Louie is my favorite restaurant in the city right now. And it isn’t just because they offer a dry Lambrusco—although that does have a lot to do with it,” says Castellano of the new DeMun neighborhood restaurant from St. Louis chef Matt McGuire. With an Italian-inspired menu and short but well-curated Italian wine list, it’s a hometown gem that’s generated quite a bit of buzz since opening in December. “Everything about Louie is just right,” Castellano says. “A perfect night for us is ordering a bottle of Lambrusco and feasting on a plate of their Prosciutto di Parma and Parmigiano-Reggiano.”

To wrap up the night, Castellano usually heads to The Cheshire Hotel to grab a drink at Fox & Hounds Tavern. “It’s cozy and off the beaten path—kind of a secret gem,” she says. The cozy drinking den was modeled after traditional English sitting rooms, and the menu is equally as British with a fine selection of Irish whiskey, Scotch, and an assortment of small plates. “If you’re lucky you’ll hear some live jazz.”