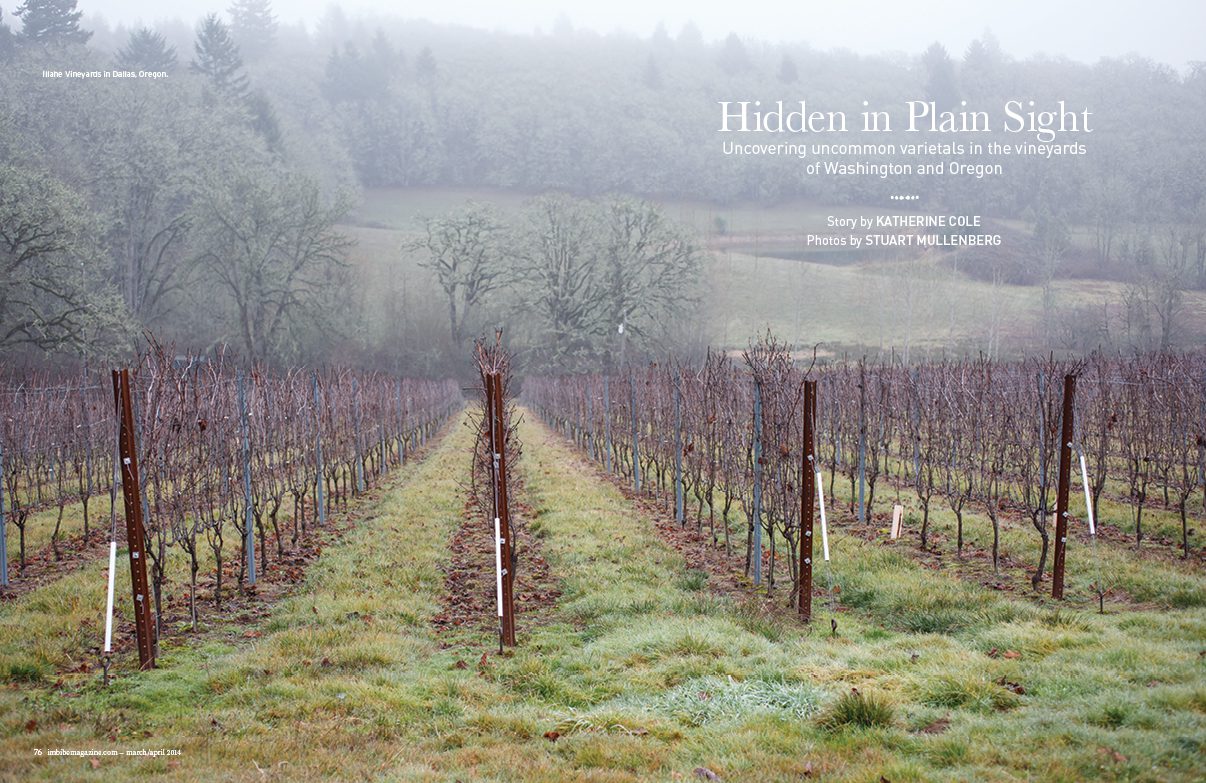 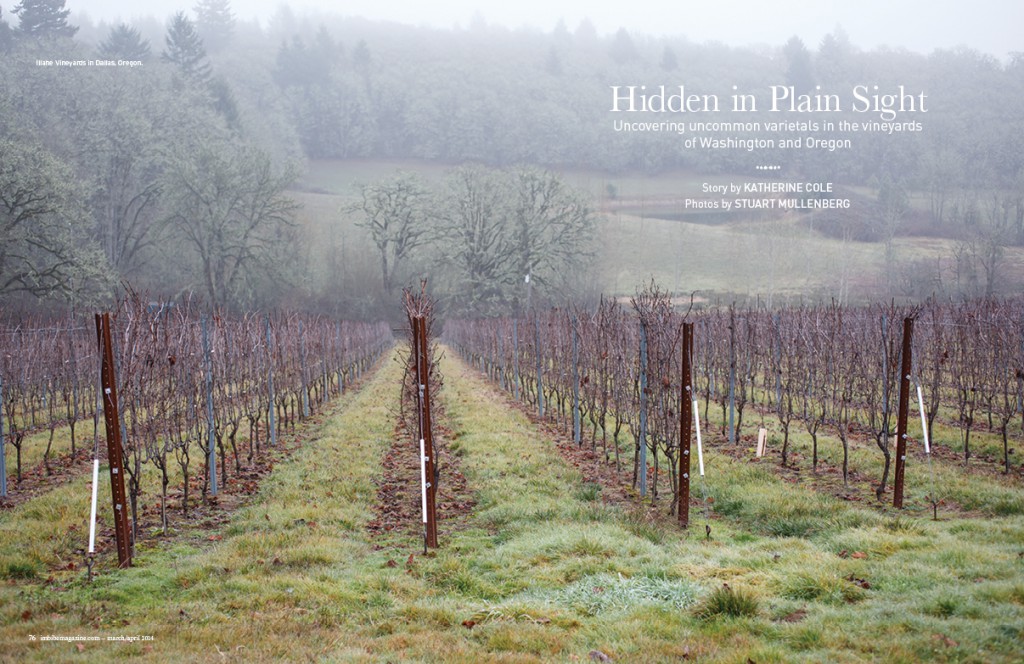 This story originally appeared in the March/April 2014 issue.

The 75-mile drive through the Columbia River Gorge from Portland, Oregon, to the up-and-coming wine town of Lyle, Washington, is a revelation of craggy basalt cliffs, tumbling waterfalls and the wind-smacked blue waters of the mighty Columbia River.

In Lyle, another revelation awaits: the breathtaking sight of a row of wines, lined up on a granite-topped bar.

What’s so arresting about these bottles? Mostly, the names—Counoise. Grenache Blanc. Grüner Veltliner. Marsanne. Mourvèdre. Picpoul. The list goes on.

This is not your typical Pacific Northwest lineup. From a global perspective, the Northwest is fairly new at the fine-wine game. The region doesn’t have centuries of production under its belt in the way that Europe, or even New World regions—such as Australia, South Africa, Chile and Argentina—do. It can’t even claim the long winemaking tradition of California.

So, while American wine drinkers know and love Oregon Pinot Noir and Washington Cabernet Sauvignon and Syrah, it’s possible that they haven’t yet discovered the best varietals for the Northwest.

Mourvèdre in the Gorge
Let’s back up to that lineup of bottles at the Syncline winery. For more than a decade, James and Poppie Mantone have been on a mission to realize the Northwest’s winegrowing potential. When they started their label in 1999, they knew they wanted to focus on varieties that thrive in France’s Rhône River Valley, which shares the characteristics of sun-roasted slopes and strong winds with Washington’s Columbia Valley.

But the Mantones found that the Rhône headliner-turned-Washington-darling, Syrah, might not be best-suited to the vineyard regions they believed to be most promising. Syrah was ripening early in the harvest season, while the first freeze typically didn’t descend until mid-November. How could they take advantage of southern Washington’s long autumn-ripening window?

Over time, the Mantones found that Mourvèdre—a low-profile grape in the Rhône that’s more prominent in France’s Bandol region and in parts of Spain—hit that late-ripening sweet spot they were looking for. “Today, Mourvèdre is our single-largest grape, by tonnage, that we harvest,” says James Mantone. And he continues to experiment with other varieties that thrive in the various microclimates he works with—including a sparkling wine from what he describes as “Alpine-style” vineyard sites in the Columbia Gorge. “In today’s world, it’s no longer enough to make good wine,” Mantone adds. “It’s about making wines that have personality.”

Urban Experimentation
Back in Portland, winemaker Anne Hubatch shares the Mantones’ exploratory mindset. Because she’s an urban winemaker, Hubatch isn’t tied down to an estate vineyard, so it’s just as easy for her to source Mourvèdre from Washington as it is for her to contract Pinot Noir grapes from the Willamette Valley for her Helioterra label. As Hubatch puts it, her central location gives her “the ability to purchase world-class grapes from a variety of different places and not be beholden to one specific area.”

Hubatch makes a zippy Melon de Bourgogne—the grape that goes into Muscadet—and a briny Pinot Blanc in addition to the better-known Pinot Noir and Syrah. And, like the Mantones, she produces a striking Mourvèdre that underscores what’s intrinsically interesting about the fruit, conveying power without weight or the extra baggage of new-oak barrels. “With Mourvèdre, I found something new and different, and I saw an opportunity,” Hubatch says. “I have a passion for geeky wines and underdogs. I like to focus energy on wines that excite me and present new challenges.”

Aromatic Whites on the Rise
A 90-minute drive south of Portland is Dallas, Oregon, near where Lowell and Pauline Ford planted their first vineyard in 1983. The Fords have long experimented with Teutonic white varieties, such as Müller Thurgau and Ehrenfelser. In 1999, when the family purchased the 80-acre Illahe Vineyards in Dallas, they planted Pinot Noir vines at the top of their hillside site but saved the lower slopes for late-ripening Grüner Veltliner.

The second-generation producers at Illahe, Brad Ford and his wife Bethany, have doubled down on old-world techniques, sprinkling oyster shells among the vine rows, and using draft horses to take care of much of the farming. And they have sharpened their focus on Grüner in recent years. They have borrowed a technique from “orange” winemaking—crushing the fruit and allowing the skins to macerate in the juice overnight—to add layers of texture and flavor to the wine. They’ve also begun fermenting their Grüner in neutral acacia barrels, rounding out the mouthfeel and underscoring the fruit’s subtle notes of hay, chamomile and aloe. “This is great terroir for Grüner, for sure,” says Bethany Ford. “But we’re just figuring it out. Every year, the fruit gets a little more complex.”

While the Fords produce fewer than than 250 cases of Grüner each year, Washington winemaker Nicolas Quillé has an entirely different vision for another aromatic white. He’s making 10 times as much Chenin Blanc, pricing it for supermarket shoppers and betting that it will take off among the curious and adventurous new class of wine consumers.

Chenin has always been a bit player in Washington, and Quillé realizes he’s fighting an uphill battle. While plenty of oenophiles are familiar with the floral, perfumed Chenins labeled under the French appellation of Vouvray, “Nobody goes into a retail wine store to buy ‘Chenin Blanc,’ ” Quillé says. “Nobody goes to shop that ‘Other Whites’ section.”

But there’s a huge opportunity for this elegant, food-friendly white. Other aromatic whites, such as Moscato, Riesling and Grüner Veltliner have become household names in recent years, and the Loire Valley, where Vouvray is located, is fashionable among younger wine enthusiasts.

Pacific Rim Chenin Blanc sells for all of $10 to $11 retail, making it a no-brainer glass-pour for restaurants. And the quality at that price is astonishing: Quillé’s two Yakima Valley vineyard sources date back to 1968 and 1972 and produce gorgeous, nuanced fruit. “Chenin Blanc has always made great wine in Washington State,” Quillé says.

A Third-Wave Paradigm Shift
There’s a palpable sense of excitement in the Northwest’s restaurants, wine shops and tasting rooms about offbeat old vines that have been rediscovered—not to mention the oddball new ones that are being planted—by today’s winemakers. Scott Frank, owner at Bow & Arrow, an urban winery in Portland, makes Melon de Bourgogne, Gamay rosé, and an Anjou-style red blend, and he has his sights set on Pineau d’Aunis. He also aims to be the nation’s highest-volume producer of Gamay Noir: he made 950 cases of it in 2013. “We are the third wave of Oregon winemakers,” says Frank—who has, incidentally, shared winery space with Anne Hubatch in the past.

As Frank sees it, there’s a paradigm shift happening in the Northwest: Grapes that were once tossed into blends are now being vinified alone, and celebrated for their quirky characteristics. “The original pioneering Oregon winemakers used Burgundy as their model,” he says. “Back then, if you had a great experience with wine, it was from one of four regions: Burgundy, Champagne, Bordeaux or maybe Piedmont.” Since then, wine prices for premier producers from the top regions have skyrocketed.

But as U.S. wine drinkers grow increasingly curious about alternatives to mainstream varieties, an increasing number of fascinating-yet-affordable wines are being imported from previously underrated regions like Beaujolais. While Willamette and Umpqua Valley winemakers have been making minute amounts of delicious Gamay for years, Frank has made Gamay Noir his raison d’être—not just because it tastes great, but because it’s an affordable option for his urban winery’s young, metropolitan clientele.

“There are a lot of compelling reasons to look at these varieties,” he says. “They are higher-yielding plants, so even though we pay less per ton, the growers make more money per acre. And because these wines traditionally don’t require a long elévage [cellar aging], everything in our cellar except Pinot Noir is bottled within seven or eight months. Plus, we save so much money by using vessels made of concrete, steel and neutral wood—and I can pass those savings on to the customer.”

Understandably, Frank’s wines sell out fast. “We’re on the front edge of an American wine revolution—we’re about to enter the next great phase,” Frank says. “There’s a fascinating thing happening with today’s winemakers embracing an Old World sensibility and experimenting with different varieties. It’s happening right now, and it’s exciting.

Katherine Cole
Katherine Cole lives in Portland, Oregon, the most beverage-obsessed city in the U.S. The longtime wine columnist for The Oregonian newspaper, Katherine is the author of three books on wine and is at work on a fourth. She is a diehard rosé drinker and is not ashamed to admit this. 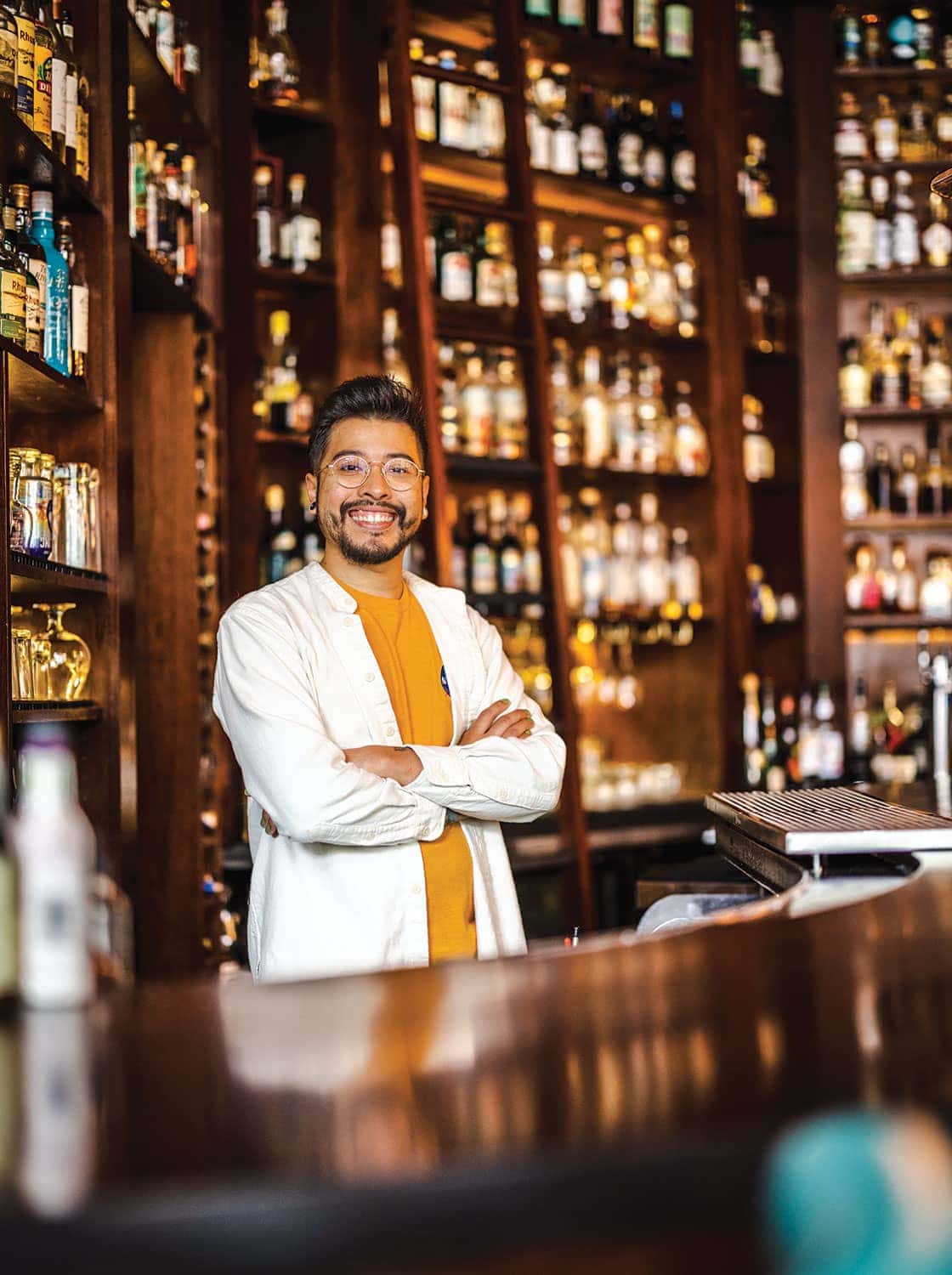