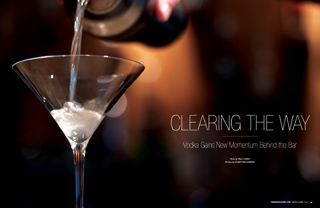 It came without warning during the hottest years of the Cold War, a surprise incursion from the Soviet bloc. But rather than ICBMs dropping from the skies over Washington or Red Army tanks flooding into Western Europe, this engagement came in the form of booze—specifically, vodka, the colorless spirit as synonymous with Russia as balalaikas and borscht that, in the 1950s and ’60s, was suddenly everywhere.

The invasion was swift and stunning: in 1950, only 40,000 cases of vodka were sold in the United States; by 1955, that number was up to 4 million. As William Grimes noted in Straight Up or On the Rocks, a history of drinks in America, sales of vodka exceeded those of the once-mighty gin in 1967, and in 1976, vodka surpassed whiskey to become the country’s biggest-selling spirit. Today, while sales of super-premium brands have been slugged by the economic downturn, vodka still reigns supreme, and according to the Distilled Spirits Council, it regularly accounts for around a quarter of all spirits sales in the United States.

For the last half-century, vodka has been an unstoppable force behind the bar, but in some corners of the drinks world, resentment has been building in recent years. Many mixology blogs and online forums dismiss vodka as flavorless; some sneeringly disdain the crystal-clear spirit, placing its epicurean value on par with that of a Hostess cupcake and its cultural contribution on the same level as a Jonas Brothers CD. Last April, these grumblings came to a head when the Wall Street Journal proclaimed in its spirits column, “Vodka is passé.”

Wait … really? As eager as some might be to see the spirit fall from prominence, vodka’s obituary, as the saying goes, was premature. Today some craft bartenders are taking a calm, measured look at vodka and determining how it can fit into the world of creative cocktails. “For me it started as devil’s advocacy,” says Jeremy J F Thompson, former head bartender at The Raines Law Room in New York who now works as a brand ambassador for Russian Standard Vodka. “I used to be of the school of thought that vodka was only good for cleaning your apron or disinfecting a wound,” he says. “But my wife and in-laws are Russian, and I’ve spent a good deal of time drinking vodka in Russia and the Ukraine. That experience opened up vodka in a cultural way for me.”

A Muddled Reputation
A simple combination of ethyl alcohol and water, vodka is largely defined by what it doesn’t have—color and, technically, aroma and flavor. But just as nature abhors a vacuum, vodka resists total anonymity, and minute differences in texture, viscosity and flavor among brands make the spirit more diverse than it might appear at first glance.

Consumed for at least 600 years in Eastern and Northern Europe, vodka can be made from anything that can be fermented and distilled. Classically made from rye, wheat or potatoes, vodka is flexible, and today it is made from ingredients ranging from grapes and oranges to milk and honey. Distilled to a very high proof, which eliminates virtually all of the properties that contribute flavor to other styles of spirit, vodka is then filtered, diluted with water to a drinkable strength and bottled.

A relative novelty in the U.S. until the 1950s, vodka quickly became popular when served in drinks such as the Moscow Mule, a mixture of vodka and ginger beer served in special copper mugs, as well as the Bloody Mary and the Kangaroo—a drink now more commonly known as the vodka martini. Embraced by the Hollywood set and memorably imbibed by James Bond, vodka was initially seen as exotic, suave and stylish. But if timing is everything, vodka’s ascendance in some ways couldn’t have happened at a worse time. Rising to prominence during an era that marked a culinary low point in America, vodka had the misfortune of taking command of the spirits world during the decades that were also culturally defined by roller disco, Def Leppard and unironic mullets.

Easily masked by other ingredients, vodka became the virtually flavorless fuel in massively popular drinks such as the White Russian, the Kamikaze and, more recently, the Sour Apple Martini—drinks that became especially popular among younger, inexperienced drinkers, who could consume feloniously large quantities of Mind Erasers without tasting anything more than sweet liqueurs or juice.

Not surprisingly, these party-hearty drinks receive a chilly reception among many contemporary craft bartenders, and Thompson says they’re the biggest reason many hold a grudge against vodka. In his opinion, the anti-vodka bias has little to do with the spirit itself, arguing that while vodka has taken some wrong turns, it’s still possible to appreciate the spirit and to use it creatively. “We don’t want to throw out the baby with the bathwater,” he says. “These drinks are the bathwater—the baby is the spirit, and that is what we should hold onto.”

Gateway to Craft Cocktails
As a quick glance at any liquor store’s lineup will prove, vodka is not only the biggest selling spirit in the country, but is also represented by dozens of brands, with many of the more expensive vodkas packaged in elaborate designer-crafted bottles. Unfortunately, a vodka’s package may have little relation to the product inside, and in the rush to promote new vodkas, some marketers make misleading or nonsensical claims about brands, boasting about the number of times they’ve been distilled—a figure of questionable relevance that’s open to creative interpretation—or the imaginative ways in which the vodka has been filtered.

Perhaps more than any other spirit, vodka’s identity has been shaped by marketing, and while that’s led to some spectacular success stories in the spirits industry, it’s also contributed to the sense of ill-will among many craft bartenders. At Employees Only, a New York bar that’s popular among the city’s bar and restaurant workers, bar manager Robert Krueger says that vodka may not be the most exciting spirit to work with for some bartenders, but he describes the backlash against vodka as an overreaction and says the spirit can play an integral role in creative bars—for example, it can help first-time customers become more comfortable with the whole craft-cocktail experience. “You can open up the world of cocktails to a customer who’s prepared to drink only vodka.”

In Austin, Texas, bartender and “Tipsy Texan” blogger David Alan agrees. “Taking an antagonistic attitude to something people drink a lot of is not a good way to further the movement,” says Alan, noting that at Annie’s, the craft-cocktail bar he recently managed, most customers were vodka drinkers and would have felt out of place in a bar that didn’t stock the spirit. “Having a good vodka cocktail [on the menu] is kind of a gateway to get people to trust you, and then you can introduce them to other things.”

Vodka’s cocktail history—or, more appropriately, its relative lack of one—has also worked against it among bartenders who prize drinks that have a heritage stretching back a century or more. While Thompson has found a handful of vodka cocktail recipes from the early 20th century—the earliest known reference to a vodka cocktail is from a 1905 newspaper article about the visit of a Russian diplomatic delegation (unfortunately the drink’s name and recipe are lost to time)—vodka didn’t really hit its stride as a cocktail ingredient until the last half of the 20th century.

Some of the earliest—and, to some bartenders, most appealing—vodka cocktails use the spirit’s neutrality as a stage for strong-flavored ingredients, such as bitter Italian amari or French herbal liqueurs. “Vodka is spreading out the flavors and adding neutrality in a very functional way, giving the rest of the flavors a broader surface to play on,” Thompson says. “The neutrality opens it up, like putting a tincture into water.” Examples include the Gypsy, a drink dating to the 1930s in which vodka helps soften the full flavor of Bénédictine; the Drink Without a Name, a Cointreau- and Chartreuse-laden contemporary classic sometimes also called the Harrington; the Carnaval Room, a 1940s drink of vodka accented with dry vermouth and tangerine liqueur; and the Staraya Modnaya, a drink created by Thompson that features the savory flavors of fresh dill and Bénédictine or kummel, a caraway liqueur that’s popular in Russia. Krueger says the Vesper—the James Bond martini variation introduced by Ian Fleming in Casino Royale—works in the same way, with the vodka giving the flavors of gin and Lillet room to breathe.

Another type of drink that puts vodka to good use is that in which vodka is used to magnify flavors, especially those of delicate herbal or floral ingredients that might be obscured by fuller-flavored spirits. “Alcohol and sugar are both flavor amplifiers,” says H. Joseph Ehrmann, owner of Elixir in San Francisco and ambassador for Square One Vodka. Ehrmann points out that much of the contemporary cocktail culture, especially in California, uses fresh fruit and other produce, and that vodka is a natural fit for these types of drinks. “Say you’re combining three fruits, an herb and a syrup,” he says. “If you’ve diversified your ingredients and play them off each other, then throw a well-made vodka on top of that, the flavor just explodes.”

These bartenders also challenge the notion that vodka loses all of its character the moment it encounters another cocktail ingredient. “When you’re serving something like a vodka martini and you throw some Lillet or French vermouth and a dash of orange bitters in there, the quality of that vodka is important,” Thompson says. “Three things are relevant: the mouthfeel, the burn (this can be a positive thing, such as with a rye vodka) and the aftertaste—that’s really where a vodka comes out, in the finish.”

Ultimately vodka’s future in craft cocktails depends not only on what distillers can do in terms of creating interesting, well-made spirits, but on what bartenders do in terms of setting aside their preconceived notions and approaching vodka for what it has to offer. “We know vodka is there,” says Thompson. “But at the end of the day there has to be a more constructive and creative approach than just ignoring it.”