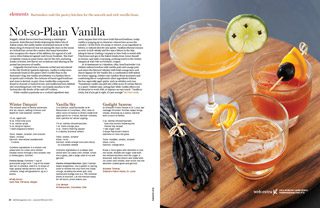 Rugged, robust flavors have been having a mixological moment. Bold-flavored drinks featuring the bitter bite of Italian amari, the earthy smoke of artisanal mezcal or the sharp sting of overproof rum are among the stars on the menu at cocktail bars across the country. But many bartenders also recognize the charm of the sublime, the appeal of a soft caress when balanced against such boozy bombast. This kind of subtlety comes in many forms, but for the rich, nurturing drinks of winter, few flavors are as delicate and alluring as the primal lusciousness of vanilla.

Originally derived from a Mexican orchid and introduced to the Old World by Spanish explorers, vanilla is today more commonly found in the pastry chef’s toolkit than in the bartender’s bag, but vanilla nevertheless is a familiar flavor in spirits and cocktails. The richness of barrel-aged bourbons and rums is derived, in part, from vanilla-like compounds found in charred or toasted wood, and vanilla has been dabbed into everything from Civil War–era brandy punches to the Technicolor tiki drinks of the mid-20th century.

While vanilla’s popularity as a cocktail ingredient may never surpass that of its more bold-flavored brethren, today vanilla is popping up in character roles at bars across the country—in the form of a syrup or extract, as an ingredient in bitters, or infused directly into spirits. Vanilla’s ethereal essence accents Scotch whisky and five-spice bitters in the Maj-Johng at Macao Trading Company in New York; is mixed with Chartreuse and gin in the Baked Alaska from Green Russell in Denver; and adds a warming, soothing touch to the Winter Daiquiri at Hale Pele in Portland, Oregon.At M Restaurant in Columbus, Ohio, head bartender Cris Dehlavi infuses bourbon with vanilla pods and orange peel, and mixes the flavored whiskey with fresh orange juice and cherry liqueur for the Vanilla Sky, a combination well-suited for winter sipping. Dehlavi says vanilla’s floral aromatics and comforting flavor complement other ingredients behind the bar, especially aged spirits, such as whiskey and rum. “Sometimes vanilla can pull out a little more of certain flavors in a spirit,” Dehlavi says, noting that while vanilla offers a lot of character to work with, it requires an easy touch. “Vanilla is tricky, but if you get it right, it’s just enough.”