Ushering in a New Era of Transparency for Japanese Whisky

Japanese distillers have been making whisky for the last century, but over the past decade the category has captured the attention of drinkers around the world as bottles from traditional brands like Suntory and Nikka have garnered global recognition and the country’s single malts and blends have become some of the most revered whiskies in the world.

And yet until recently, there have been little to no formal regulations surrounding the category. When it comes to age requirements, types of barrels used, or origin of the distillate itself, producers have enjoyed remarkable leeway; some purchase whisky from other countries to blend or bottle and sell as “Japanese,” while others have mixed aged whisky with young distillate to create a product that would cost less (yet still bear a substantial price tag). This has led to some confusion among consumers, with some whiskies made entirely in Japan sharing shelf space with those sourced from elsewhere and labeled to appear Japanese.

“Before [Japanese whisky] started winning so many awards, there were a lot of producers who were making whisky the right way, going above and beyond for so long. These producers were making high-quality products, setting the foundation for this category, even though it wasn’t fully defined yet,” says Kumiko owner Julia Momose. “Then there are people who have seen this success and decided to ride on those coattails and put out subpar products. It’s not fair, but it’s also just not right to let people take all of the incredible hard work and labor of others and put out a cheaper version that they’re still selling for the same price as the more authentic ones. It’s like forging an art piece.”

Thankfully, a movement is afoot to demystify the different types of Japanese whisky as the Japan Spirits & Liqueurs Makers Association (JSLMA) released a set of Standards for Labeling Japanese Whisky earlier this year, specifying suggestions for raw ingredients, production methods, aging, bottling, and labeling. While the standards are merely suggestions (the JSLMA is not a government entity), this call for transparency has excited many fans of Japanese whisky. “We were delighted when we heard the news,” says Makiyo Masa, founder of Japanese spirits e-commerce site dekantā. “This news is a huge step forward for Japanese whisky and will lead to a much more honest and transparent industry.” 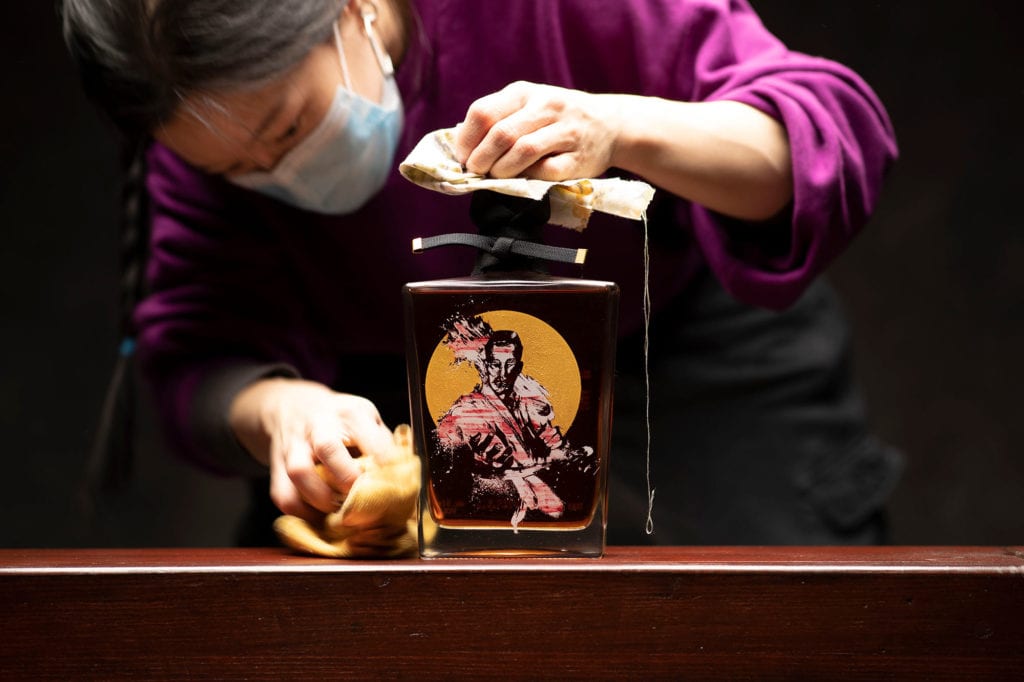 A recent Japanese whisky release from dekantā of Single Malt Karuizawa whisky, which abides by the new labeling regulations. | Photo by John McCaffery.

The regulations went into effect on April 1, 2021, and participating producers have three years to bring their practices up to code. In order to be labeled Japanese whisky, the distillate must be made from malted grains or other cereal grains, plus Japanese water. The latter, Momose says, is a particularly notable addition. “Japan’s water is so incredible, and each region’s water is different, so this is a great opportunity to highlight that.”

Products must be fermented and distilled in Japan. The whisky must be distilled to an alcohol content of less than 95% abv, and aging must take place in wooden casks; the spirit must also be matured in Japan for at least three years. “I am excited they don’t say oak specifically, because something that is super exciting in Japanese whisky is using different types of wood, like sakura (Japanese cherry) casks,” Momose adds. “And to have the minimum age mark of three years is a bold standard to set, but I think it is an important one—since producers have three years to become compliant, they have three years to start aging what they have now. The rules were very thoughtful in that sense.”

Bottling must also take place in Japan, with a minimum of 40% abv. Masa adds that the production regulations are in line with what she expected, and that she’s particularly pleased to see how they will help establish a more firm regional style and sense of place for the category. “It sounds simple, but the fact that the spirit must be fermented, distilled, and aged at a distillery in Japan is a major step forward for the category. This particular rule will ensure greater transparency on provenance, something that international consumers have come to expect—given the protections around Scotch whisky, for example—and so allows Japanese whisky to truly enter the global playing field.”

Another notable regulation addresses misleading labeling. “If the whisky doesn’t meet the requirements, the label can’t have: the names of people that sound Japanese or names of cities, regions, mountains, and rivers from Japan. The Japanese flag can’t be on there, either. You can’t have the name of a Japanese era on the label. It’s very strict,” says Momose. “They don’t want producers to false advertise in any way. That is pretty intense because it means that if these brands want to do world blends they are going to have to find a way to market it in a way that stands for itself.”

“It sounds simple, but the fact that the spirit must be fermented, distilled and aged at a distillery in Japan is a major step forward for the category.” —Makiyo Masa, founder of dekantā

For companies like dekantā, Masa says the new regulations will make it easier for customers to find the right bottle. “Soon the average whisky drinker will be able to pick a bottle off the shelf and be more confident that the contents reflect what is described on the label. We are mindful that the regulations are not backed up by law, and that there may be some producers who will continue to mislead consumers, but with the major brands represented by the JSLMA, we are confident that this is a major step forward.”

Momose agrees but adds that customers should not immediately discount global blends from the quality conversation. Because Japanese producers bring a unique and distinct set of traditions and sensibilities to whisky production, one can find global blends that are of the same exceptional quality as homegrown single malts (she cites Chichibu’s Ichiro’s Malt & Grain World Whisky as an example). “As long as they are transparent, I’m thrilled that there might be a great Scotch distillate in a blend. But when people try to make a whisky sound like it’s all from Japan, that just doesn’t sit well.”

With three years to come up to code, it will be a while before drinkers see the full transparency these rules aim to create within the industry (though a few, like Nikka and Suntory, already embrace transparency on their labels), but in the meantime Masa advises looking at product labels to find production details when eyeing a bottle. Momose suggests looking at the JSMLA website to see some of the producers that have signed up to support the regulations. “The organization is planning on putting out a list of members to get that information out there, so that is something to look forward to. There might also be a sticker coming that would go on the bottles,” she adds. “If you see a bottle and its not one you recognize, do a quick Google search! More often than not, the producer will have noted if it’s adhering to the rules. If it doesn’t come up right away, it probably isn’t fully Japanese.”