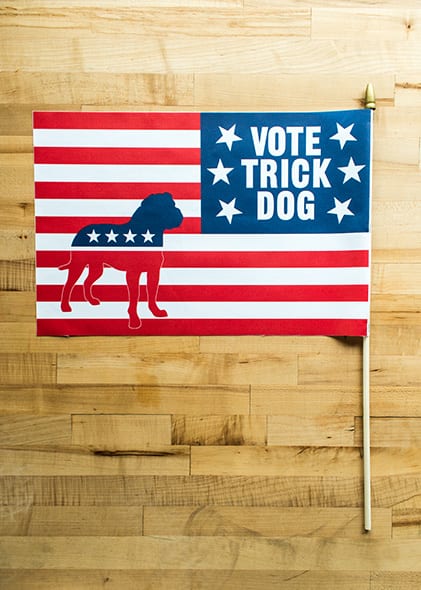 “There are two things you’re not supposed to talk about in a bar: religion and politics,” says Morgan Schick, creative director for the Bon Vivants. But if you’re the team behind Trick Dog in San Francisco, few subjects are off-limits. “We thought it would be funny to put politics directly into bars,” he says of their latest political-themed menu. “There’s nothing on the menu about the current election; we’re not trying to start any fights. But we know it’s on everyone’s mind, and we might as well have some fun with it.”

The “Trick Dog for President” menu—part of the bar’s bi-annual series—releases today at 3 p.m. PST and features drinks named after political slogans through the ages. The rum-based Romanism & Rebellion cocktail references the 1884 presidential election, when Republican James G. Blaine’s campaign lost to Grover Cleveland after a Reverend made the statement: “We are Republicans, and don’t propose to leave our party and identify ourselves with the party whose antecedents have been rum, Romanism and rebellion.” And the Drill Baby Drill references the 2008 Republican campaign—first used by former Maryland Lieutenant Governor Michael Steele (who later became Chairman of the RNC) and later by Sarah Palin during her vice-presidential debate. Combining rye whiskey, Amaro Lucano and long pepper, it’s a “strong, burly, oily-looking drink,” Schick says.

For the reveal of the menu, Trick Dog will be decorated in full political rally style, with flags, buttons and other festive garb, and in addition to the featured cocktails, the new menu will offer boilermakers, shots, highballs, and low-proof and alcohol-free drinks.