Why Tobacco Cocktails Are a Terrible Idea 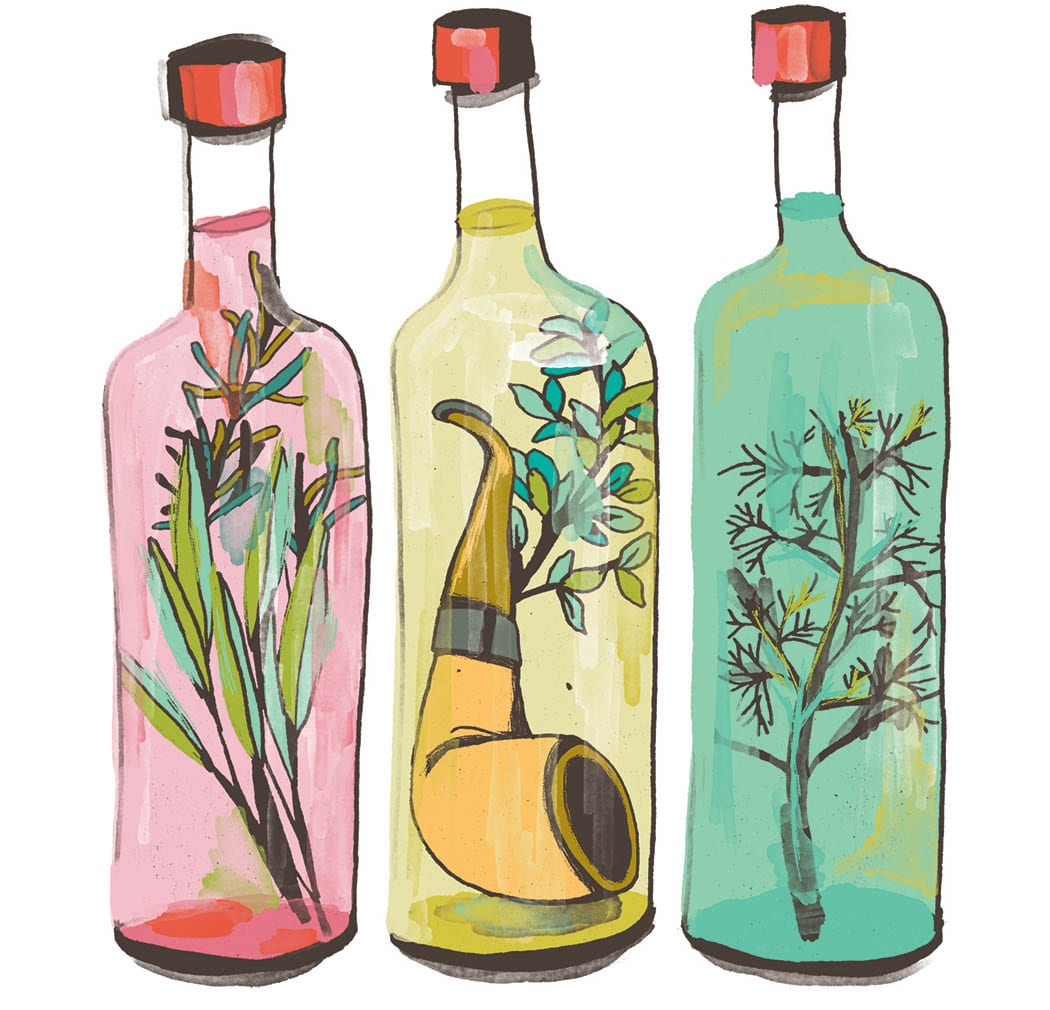 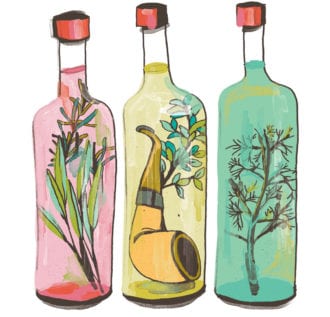 Sometimes a walk in the park is just a walk in the park. But when you’re a trained chemist, and the walk you’re taking is through the botanical gardens of the Royal College of Physicians in London, that casual walk can take on serious tones.

“I was given a tour of the gardens by the curator, who’s a physician, and we were talking about medicinal plants,” says Ted Breaux, a chemist based in Birmingham, Alabama. Breaux is known in drinks circles as a distiller of spirits including a line of absinthes through his company, Jade Liqueurs; in 2007, Breaux and his business partners successfully challenged the U.S. ban on absinthe, resulting in the spirit becoming legally available for the first time in almost a century. “He and I have both conducted quite a bit of study into ethnobotany—the evolution of botanicals and their use in medicine in different cultures. One thing he said keeps ringing in my head: Tobacco has killed more people on the planet than any other plant.”

Tobacco’s hazards are well established, and its effect on human health has been documented for generations. Between legal restrictions and changing attitudes about smoking, cigarettes and cigars are increasingly rare in American bars. Still, some bartenders are turning to the plant for use as a cocktail ingredient, preparing tinctures, bitters and infusions that feature tobacco’s flavor. That, Breaux notes, is an incredibly bad idea.

“We write off the dangers of tobacco because, obviously, tobacco products are legal and sold,” he says. Breaux points out that the conversations about tobacco’s dangers are largely (and understandably) dedicated to chronic use of the plant through smoking or the use of smokeless tobacco products; but tobacco also poses acute toxic hazards. “Just because tobacco is everywhere doesn’t mean we should disregard its potential toxicity to humans. We have to remember that nicotine—the substance that is tremendously addictive and is the reason tobacco products are sold—is a poison. It’s a very efficient one. Nicotine is used in pesticides. It can kill lots of different organisms, including us.”

Most people—including bartenders—are likely unaware of nicotine’s potent toxicity, and Breaux finds this worrying. As a longtime distiller, Breaux often finds himself in cocktail bars, and seeing mention of tobacco on bar menus triggers his sense of alarm. “Being in the cocktail industry, we witness things like infusions and bitters made by bartenders—how are these preparations made? By sticking something in alcohol,” he says. “The thing is, if you soak something in alcohol, there is really nothing excluded—and that’s a problem, because someone who makes an infusion with tobacco is basically concentrating that tobacco. That’s something that has no business in food or drinks, period. I’ve heard of more than one instance where someone’s made a tobacco infusion, and someone gets sick. One of the saving graces with nicotine is someone usually gets sick before they kill themselves.”

Someone who makes an infusion with tobacco is basically concentrating that tobacco. That’s something that has no business in food or drinks, period.

Avery Glasser—the Portland, Oregon–based partner behind Bittermens, a producer of bitters, liqueurs and other cocktail ingredients—shares Breaux’s concern. “There is no gray area about this,” Glasser says. “Small amounts of nicotine, when ingested, can raise people’s blood pressure, give them heart attacks, and even kill them.” Glasser notes the only way to gauge the safety of a tobacco-containing product would be to send a sample to a lab for positive confirmation testing, which would accurately gauge the level of nicotine per milliliter in the batch—but there’s still an added hurdle, he says. “Simply put: it’s not legal. Tobacco isn’t allowed for food consumption in the U.S.”

On a surface level, ingesting tobacco via an ingredient in a cocktail may not seem like a big deal—chewing tobacco and snuff have been in use for centuries, right? But it’s not that simple, and Glasser says it comes down to understanding the basics of extraction and bioavailability. “You can smoke a cigarette, but between the process of burning the tobacco and inhaling it into your lungs, you’re only getting a small percentage of the nicotine [in that tobacco],” he says. Several years ago, chemist and bartender Darcy O’Neil broke down this difference on his blog, noting that alcohol, as a potent solvent, is very efficient at extracting all sorts of chemical compounds, including nicotine. “And alcohol makes it more bioavailable—it goes through your stomach, rather than your lungs,” Glasser notes. “You could take the same amount of tobacco that a moderate smoker might smoke, and if you infuse that into alcohol, you’d have very bad results.”

Even chewing or eating tobacco will produce different, and possibly more limited, effects than consuming an alcohol-based extract. “With chewing tobacco, you’re limited by how much you can put in your mouth, the rate it leaches, and the rate it’s absorbed [into your bloodstream],” Breaux notes. “When you make an infusion with tobacco, you have everything there, right now, dissolved in a substance that gets into the bloodstream very quickly.” Alcohol’s ease of absorption acts as a force magnifier for tobacco’s toxicity, he explains. “If you take a shot of whiskey, how long does it take before you feel it? Not long—so you have that wave of nicotine going into your system. I think most people would have enough sense not to take a shot of a tobacco infusion, but even when it’s used in bitters,” it poses a significant threat, he says.

The federal government has long restricted tobacco’s use in food and beverages, and tobacco isn’t listed on the FDA’s list of GRAS (Generally Recognized as Safe) materials. “If someone were going to make infusions of any botanical material, I’d strongly advise not using anything that doesn’t at the very least appear on the list of GRAS substances,” says Breaux.

Breaux’s concerns about tobacco’s use in spirits stem from his training as a scientist, but he’s also closely acquainted with how the plant interacts with alcohol: Breaux produces Perique Liqueur, a tobacco liqueur first released in 2006, and currently only distributed in Europe. Breaux admits that the message can be confusing—“tobacco infusions are bad, but a tobacco liqueur is okay?”—but notes there are significant differences between the two, and that the challenge enticed him as a chemist and as a distiller. “For me to take something that’s very poisonous and subject it to a process that excludes the things I don’t want—that’s tricky, and that involves chemistry,” he says. “This took research—this took trials and analytical testing to see if I could achieve what I wanted to do.”

Such testing required a lab, and the production process involves distillation and repeated evaluation, using tools, techniques and expertise to ensure safety. The process, Breaux says, is not unlike the one he first used with absinthe, in evaluating the toxicity of wormwood and finding ways to eliminate such risks while still utilizing the plant in a distilled spirit. “Perique is not an infusion—it’s very far from it,” he says. “For me, it would be completely irresponsible to put something I knew was harmful on the market—and with respect to safety, I don’t know if there’s any liquor on the market that’s been subjected to more testing than Perique to ensure it’s safe.”

Still, U.S. regulators have restricted import of Perique due to the use of tobacco in the production process, a restriction that doesn’t evaluate the safety of the finished product. Breaux says he understands. “This is between the FDA and me, and honestly, I can’t blame them for being as thorough as they are,” he says. “It’s like if I said I was trying to make uranium safe.”

Breaux and Glasser both note that while it may be scientifically possible to create a product that safely uses tobacco, the tobacco-infused spirits, tinctures and bitters found in so many bars clearly fall on the wrong side of the safety line. Glasser says the situation is similar to that in restaurant kitchens, where chefs may work with potentially toxic foods, but do so only with caution, training, expertise and—in some cases—official certification.

“There are certain things that are just too dangerous for a non-expert to do,” Glasser says, pointing to the example of fugu, or pufferfish, a specialty in Japan that can deliver a fatal dose of poison if prepared incorrectly. “In the hands of someone who’s trained and certified to work with pufferfish, the risk is dramatically reduced. There’s still a risk, and people know they’re doing something that may cause harm to themselves, but steps are taken to reduce that harm. But there’s no person in a bar or restaurant who can make that determination with tobacco.”

“We expect a terrific amount of creativity from chefs, but you’ll never see a restaurant owner risk their guests’ health” with unfamiliar mushrooms or other plants, Glasser continues. With cocktails, however, some bartenders seem more willing to take risks with ingredients such as tobacco, without fully investigating the safety drawbacks—and that’s a big problem. “It feels like in the bar industry, the quickest way to get notoriety is to do something crazy and wacky with ingredients that people aren’t using, without asking ‘Why aren’t people using it?’ ”