The Return of Throwing Cocktails 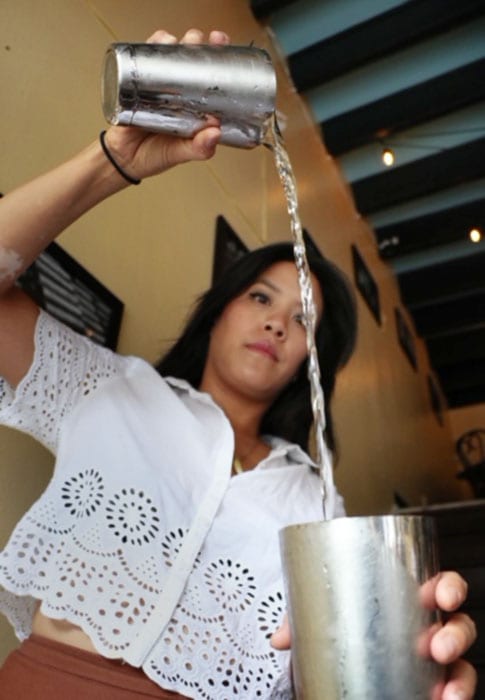 It looks like a party trick. After combining ingredients in a shaker tin, the bartender softly rolls them around and starts to lift the half-moon tin in the air, letting the liquid trickle down in a glistening ribbon until it lands safely in the cradle of the other half of the shaker. This practice of “throwing” or “rolling” cocktails is a time-tested method of mixing that dates back to ancient Greece and Egypt, and it’s recently caught the interest of bartenders around the world.

Jared Brown, writer, educator, distiller and co-founder of the Museum of the American Cocktail and Mixellany, has spent a lot of time researching the origins of cocktail throwing. “The first time the words ‘cocktail shaker’ appeared in print, in 1869, the article described the mixer using the tins to throw,” he says. “I found an 1850 illustration of the El Dorado Hotel, San Francisco. In the background you can see a bartender throwing a non-flaming drink.” By the 1890s, however, throwing was heading into the shadows of bartending. “I found an article where two old bartenders watched a young bartender shake and pour,” Brown says. “One old timer commented to the other that the art of the profession was dead because the young bartender did not throw.”

But as an interest in all things old has spread among bartenders over the past decade, throwing has begun re-emerging. Brown cites Boadas in Barcelona as the place where things began to change. A young Spanish bartender named Albert Monserrat had traveled from the Las Rambles cocktail outpost to the short-lived New York wing of the Museum of the American cocktail to find information on throwing. “He was afraid it would die out completely,” says Brown. Inspired by the idea, Brown and wife Anistatia Miller traveled to Spain to learn more from Albert’s mentors, Doña Maria Delores Boadas and her husband Don Josep. “She was balletic in her effortless motions. She never broke eye contact. She never lost the thread of conversation. And when the drink was ready, she held that mixing glass high once again and let the drink plummet into a waiting cocktail glass like a circus high diver landing unharmed in a water barrel.”

Doña Maria Delores and Josep trained Brown and Miller on the technique, and they in turn began to spread the word. “We had a bar school on an island in the south of France and flew in top bartenders from around the world,” says Brown. “We taught them and they taught the next generation. A few of our friends followed our primary path as well, seeking out the Boadases and learning from them. I cannot begin to tell you how heartening it is to see throwing returning around the world.”

In New Orleans, Manolito owner Nick Detrich adopted the practice during his travels to Cuba. “Miguel Boadas, who owned Floridita prior to Constante Ribailagua, brought the technique with him from Barcelona to Cuba where it was heavily in practice until after Ribailagua’s death,” he says. “I think it’s an excellent technique for many drinks that have a substantial aromatized wine element to them: the Martini and El Presidente being foremost with Manolito.”

And Brown says it’s a simple technique to learn. “Recently, while giving a class to a group of bartenders, I discovered none of them had tried throwing, and none of them wanted to get singled out,” he recalls. “So I turned to the event photographer and I asked if he had ever made a cocktail. He had not. I got him to put down his camera and pick up a pair of tins. With a few easy instructions, his first ever throw was every bit as good as mine.”

Lindsay Matteson, whose résumé includes stints at Pouring Ribbons, Amor y Amargo, Canon and currently Barnacle, was one of Brown’s students. “I like it for a few reasons,” she says. “One is basic ergonomics—it’s a really easy motion on your body, because you’re working with gravity, so everything is working in your favor.” The former actress also favors the motion for its theatricality. “So much of what we talk about right now is the craft of making cocktails, but when you’re behind the bar you have to combine that with the art of bartending and entertain a room for 12 hours.” Rolling a cocktail is an easy way to catch the attention of a guest without much effort. “It’s not extraneous or extra effort in the same way that flair bartending is, but it is unexpected.”

Perhaps most importantly is that throwing also affects the texture of the drink. “When you’re throwing versus stirring, you’re adding aeration to the drink,” Matteson adds. “You’re not agitating the cocktail in the same way you would if you shook it, but you get this beautiful body and texture that you simply can’t get from stirring. It’s a beautiful, simple and elegant technique. It’s a win-win.”