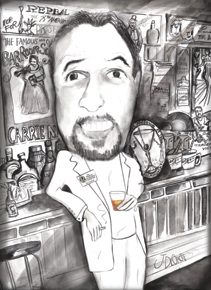 The history of cocktails is speckled with drinks bearing (or baring) titillating names, from Bosom Caresser or Monkey Gland to Slow Comfortable Screw or Slippery Nipple. Ah, but these are mere naughty frivolities. Rare would be a potion that actually cut its teeth in the seamy lace-bound portals of bordellos.

Meet the sangaree. If your knee-jerk reaction to the name is that it derived from the folksy yet urbane sangria, you’re not alone. Dictionaries of every stripe record the words as being synonymous, but this isn’t exactly so. The red wine, citrus and sugar beverage we call sangria dates from 1961, whereas sangaree has been around at least since 1774. Both drinks do have the same Spanish root word: sangre (meaning “blood”), but of the two, sangaree is more versatile for reasons your Doctor will shortly reveal.

Still, there have always been points in common. A single citation of a common predecessor was noted in a 1736 issue of the British Gentleman’s Magazine. “… a punch seller in the Strand had devised a new punch made of strong Madeira wine and called sangre.” Whether this is strictly true is unclear, but present are the wine and the red color befitting the name. Why this English punch seller would choose this evocative Spanish word as a metaphoric title makes your Doctor wonder if it was more of a found recipe than a creation.

Certainly by 1785 the strange drink, now called sangaree, was thoroughly equated with the Antilles islands and with Spain. Several dictionaries now listed the word and pointed to the West Indies as its place of residence. It had also achieved a fuller definition and one obliging it more to punch than wine. The Dictionary of the Vulgar Tongue, published that year, wrote, “Sangaree: Rack punch was formerly so called in bagnios.” Well, a bagnio in this sense was a brothel, and the “rack” punch referred to the arrack that was the first of five elements in classic punch: arrack, citrus fruits, spices, cane sugar and water. The arrack in the dictionary was not the anise-tinged spirit of the Middle East but the father of modern rum, Batavia Arrack from the Antilles, Java specifically. Given this definition, the sangaree was a single-serving punch!

An 1837 cookbook, Directions For Cookery In Its Various Branches by Miss Leslie, expanded the definition: “Mix in a pitcher or in tumblers one-third of wine, ale or porter, with two-thirds of water either warm or cold. Stir in sufficient loaf-sugar to sweeten, and grate some nutmeg into it.” Gone was the citrus, and by the publication of the first 10 cocktail recipes in 1862, the fruit was still MIA—but the sangaree selection had expanded. In his book, “Professor” Jerry Thomas listed six sangaree recipes, each with a different base alcohol: port wine, sherry, brandy, gin, ale and porter. Water, sugar and nutmeg were all they had in common, but notably all but the beer sangarees now featured this new-fangled stuff called “ice.”

Prohibition finally struck the last nail in the catafalque of the old sangaree, though, like a sexagenarian rock band, it would continue to make occasional guest appearances over the years. Cut to 1961 when sangria was created based on that earliest sangre recipe, adding ice and using lighter red wines. The sangaree was really forgotten during the sangria craze and the hoopla surrounding its American introduction at the 1964 New York World’s Fair.

It took the cocktail resurgence to cajole a new generation of drink explorers into revisiting the sangaree. No one got the spirit of it better than fellow scribe and enthusiast Paul Clarke, who wrote this recently on his blog:
If you’re looking for a new way to get tossed out of a bar, you could do worse than making it a habit to stroll in, rap loudly on the bartop with your knuckles and shout, “Barman! A Port-Wine SAN-GAREE, extra nutmeg, s’il vous plait—and keep ‘em comin’!”