Mixopedia: The Complicated Appeal of the Rimmed Cocktail Glass 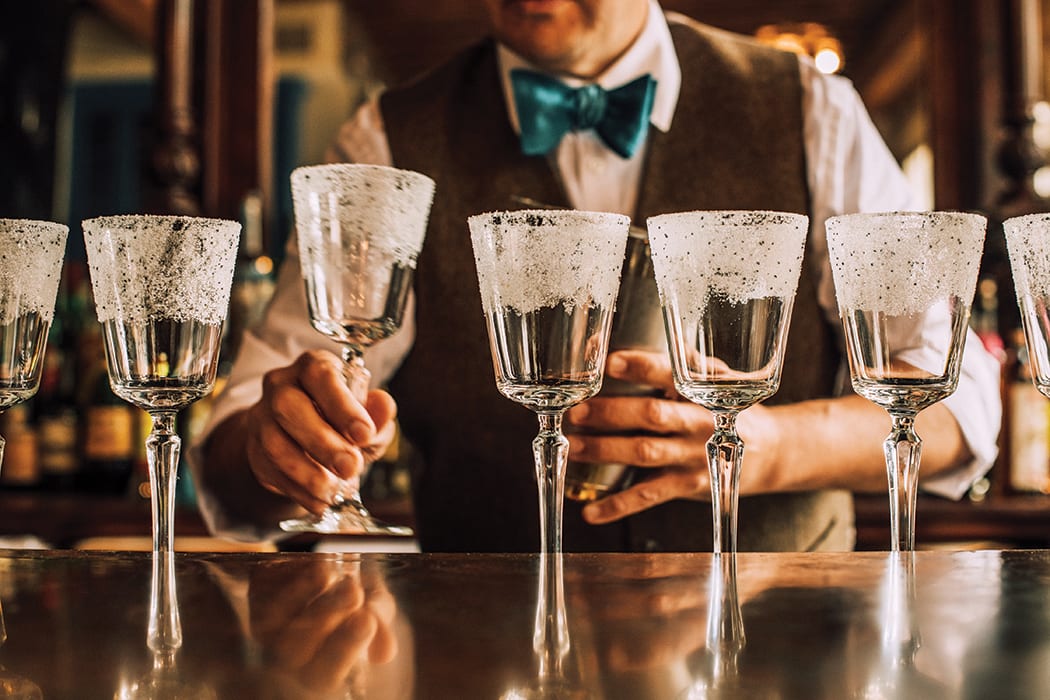 Here’s what I love about sugar or salt rims on cocktail glasses: They fully engage my senses. There’s the taste, obviously (a sudden smite of salty or sweet). There are the visuals (a necklace of tiny diamonds!). And there’s the touch (the rough texture under my lips, a jar- ring detour for one expecting the lapidary smoothness of glass).

Here’s what I don’t like about crusted rims: All of the above. A rim moistened and dredged through something granular is a pleasant detour from the usual. But front-loading taste and texture is a novelty, and for a second drink, I prefer that sugar or salt not interfere with the direct transit from glass to gullet.

I’m not the only one who requests a break—so, apparently, does drinking society. Throughout cocktail history, the fancy rim has been in favor only intermittently. As best I can figure, rimmed drinks have gone through four epochs since first introduced in the mid-19th century: Brandy Crusta, Sidecar, Margarita and its Evil Spawn, and Modern Revival.

According to popular convention, the first encrusted rim was introduced by Joseph Santini at his fabled New Orleans bar, Jewel of the South, around 1855, the same year he opened. Santini’s elaborate Brandy Crusta caught the attention of Jerry Thomas, a bartender who featured it in the first bar guide ever published, in 1862.

Thomas’ instructions were to rub a sliced lemon around the rim of a “fancy red wine glass,” and then “dip it in pulverized white sugar, so that the sugar will adhere to the edge of the glass.” The Crusta’s other visual flourish was a long, coiled lemon peel, pared “the same as you would an apple” and nestled in the glass. “Then smile,” Thomas concluded.

(The name is likely from the fact that the sugar forms a crust on the glass. A more pleasing if speculative etymology would link it to the ancient Roman custom of adorning the rim of a cup with removable bling that was soldered or attached with rivets. This was called a crusta.)

Popular lore claims that the Sidecar cocktail was first concocted in London around World War I and named after the detachable passenger compartment on a motorcycle. It didn’t appear in British cocktail books until around 1922, during American Prohibition, and it didn’t get adorned with a sugar rim until 1934, in recipes in three books published that year. (This also happened to be the year after repeal, so in another fit of baseless speculation, let me posit that Americans required the extra sugar to ease back into the habit of stiff drink.)

The Margarita surfaced in the late 1930s and was essentially a Sidecar variation, made with tequila rather than Cognac. It boomed in the 1970s and ’80s, and somewhere along the line some genius had the idea to rim the glass with coarse salt. No doubt this was a cheeky nod to the salt-lime-tequila shot used for years to numb the taste buds into allowing the passage of bad tequila. “Salt or no salt” in the late 20th century was the second most uttered bar phrase, after “What’s your sign?”

The runaway success of the Margarita didn’t come without a heavy cost. If the public clamored for sugar or salt, why not raid the supermarket and see what else might adhere? On went vanilla sugar, cocoa, cayenne pepper, crushed candy canes and, of course, pumpkin spice. Such adornments were often applied clumsily, like lipstick after a third Martini.

The modern revival of the flavored rim at craft-cocktail bars has been more about history and elegance than the wanton slathering of the candy aisle on a glass. Jewel of the South, where the first rim was purportedly sugared, has resurfaced in New Orleans, at least in name. Nick Detrich, who opened it with bartender Chris Hannah in 2019, says their elaborately encrusted Brandy Crusta has consistently been one of the bar’s best-selling drinks. Their classic Crusta is enlivened with a mix of blue caster sugar and granulated white sugar. Detrich notes that a sugar rim permits him to “serve a relatively dry drink that allows the guest to sweeten it as they wish.” One of the great advances I’ve seen of late is the rise of the half-rimmed glass, allowing the drinker to customize every sip. It also means the bartender can forgo the question “salt or no salt,” which customers sometimes mistake as an invitation to a lengthy conversation.

Detrich also appreciates that the rococo rim engages those other senses—their Crusta is as appealing to the eye as to the lips, he says, and “just the texture of having a bit of sugar crunch along with a Brandy Sour, or whatever spirit you so choose, is always going to delight.”

Just remember that delight is perishable and short-lived. Yes, I’ll order that Brandy Crusta, please. And make my next a Manhattan.