Sports Bars Up Their Drinks Game 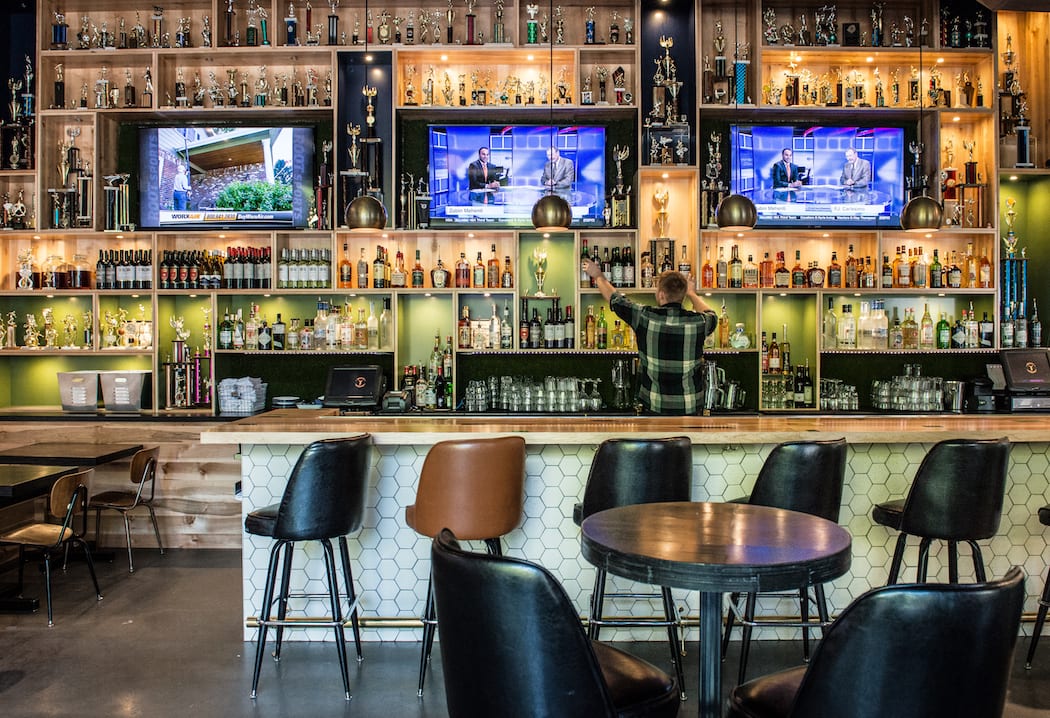 Many of the best sports bars are a little rough around the edges—no-frills interiors, menus of cheap macrobrews and fried food, and plenty of TVs broadcasting local and national games all day, all year. But in some cities, the traditional sports bar is getting a facelift. The attitude remains down-to-earth, but the interiors take it up a notch (or two), and the menus offer more in the way of craft brews and cocktails, eats that won’t send you straight into a food coma and, of course, TVs still showing your favorite sports—here are a few standouts.

District Tap House, New York
This midtown haunt isn’t sporty on the surface, but the 20 partially hidden televisions and buckets of beer beg to differ. These buckets aren’t filled with macro lagers, though; instead, canned microbrews from the likes of Founders, Flying Dog and Sixpoint share the ice. District opened in January of 2014 and the ball doesn’t stop with beer—the bar also treats its fans to a sprawling, seasonal cocktail list with four options on draft and others featuring house experiments like marmalade-infused rum. “I think sports fans always wanted a place where they could watch the big game while enjoying thoughtfully-prepared food, well-crafted cocktails and a massive selection of beer,” says owner Bennett Page.

Society, Denver
Sports aside, Society may be the Mile High City’s biggest proponent of drinking local. The bar offers over 50 Colorado whiskeys alone, a healthy cocktail list and a slew of local beers. Society opened in time for the World Cup in 2014 and features imaginative distractions for those tired of staring at the television, like their foosball table.

Century, Portland, OR
One of the loftier concepts in the sports bar arena, Century is home to five retractable projection screens, a rooftop deck and chic wooden bleachers made to mimic stadium seating. Impressive in scale, the bar can accommodate 300 people, with a tequila list that tops 50 in total and plus-size, 24-ounce Mason Jar cocktails. “You can sit and watch an entire quarter of basketball without having to get up for another drink,” says GM Nate VanDeventer. Sample one of a dozen draft beers, boozy slushies made from fresh juices and purées, or something from the agave-centric cocktail menu like the St. Francis Park (mezcal, Aperol, Punt e Mes, marashino liqueur, Peychaud’s and orange zest).

Quality Athletics, Seattle
Just in case you’re not sure you’ve arrived to a sports bar, Quality Athletics gives you an immediate hint with their back bar lined with trophies and flat screens. The Pioneer Square bar features a slushy and snow-cone machine for rooftop drinking, and the food menu pulls ingredients from the rooftop garden. The rest of the drinks menu features cocktails named with competition in mind, such as the Triple Crown (gin, cranberry shrub, dry Curacao and lime) and the Summer Storm (Cucumber Fresno gin, Ordoki apple liqueur, lime and soda).

Bludso’s, Los Angeles
Widely regarded as the best barbecue in L.A., Bludso’s first started in Compton before expanding to Hollywood. Owner and pitmaster Kevin Bludso has roots in Texas and the scene at his restaurant is not unlike what you might find in the Lone Star state. Paper towels are the napkin of choice and a flatscreen TV is never out of sight, always tuned to various sports games. All that sauce and salt begs for a drink and Bludso’s is not lacking in the cocktail department. Try the Rio Star (grapefruit-infused gin, Fernet, lemon and tonic), a Southern 75 (bourbon, lemon, sugar and Allagash White) or a draft julep complete with it’s signature bundle of fresh mint. The bourbon, rye and scotch lists are admirable, and it wouldn’t be Texas-inspired without Shiner Bock by the pitcher.

The Vig, Chicago
Modeled after a mid-Century sports parlor, The Vig is the poshest, most nostalgic bachelor pad you can imagine. Black-and-white portraits of athletes and playing fields adorn the walls, and the exposed rafters give the place an upscale attic vibe. Chicago has six major pro sports teams, so there’s always a game on the screen. Brunch cocktails like the Maverick (gin, carrot juice, grated ginger, lemon juice and simple syrup) are perfect for a late-morning Bears game, while the Charlie Brown (mezcal, Cointreau, pumpkin purée, lemon and cinnamon) serves as a ninth-inning nightcap. There’s also bottle service for a host of spirits and sparkling wines and both the beer and wine lists are winners.