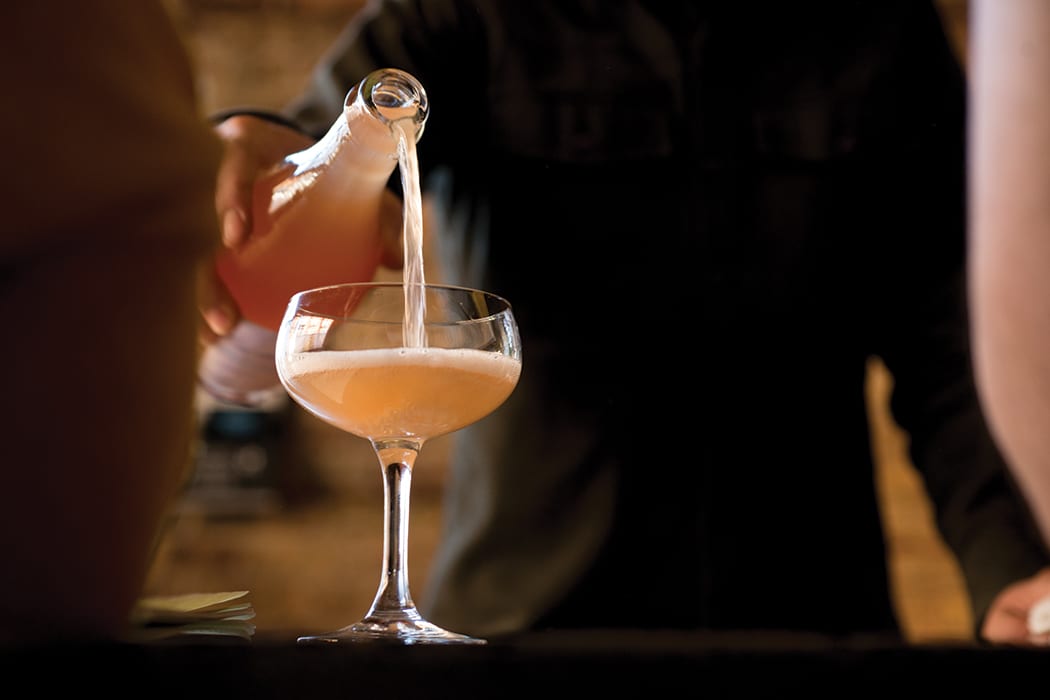 Since its opening in 2014, Chicago’s Parachute has racked up accolades from Bon Appétit, Michelin, Eater and many others for its fresh take on Korean-American fare. Working with a similar pastiche-style cooking approach as David Chang’s Momofuku and Danny Bowien’s Mission Chinese, owner and chef Beverly Kim turns out vibrant, hybridized versions of bi bim bap, dukbokki and bing bread.

To complement the food, beverage director Matty Colston, a veteran of the Chicago wine scene, has amassed a fun and freewheeling wine list that deftly covers both Old and New World, and everything from orange wine to classic reds. “If it speaks to me, it speaks to me,” he says of the logic behind his picks.

In particular, the robust sparkling-wine section stands out—not only for its depth, but because, notably, around half the wines are made in the lightly fizzy pét-nat (pétillant naturel) style, reflecting a growing trend in restaurants across the country.

Fizzy wines have long been an insider pick among sommeliers—bubbles and acidity make for food-friendly wines. But a look at lists across the country shows a dynamic shift from Champagne-style wines to sparkling alternatives. The grower-Champagne movement from the mid-oughts may have put cracks in the big house-Champagne ceiling, and now an array of lesser-known sparkling wines—such as pét-nat, sekt, Lambrusco and frizzante—are securing more and more real estate on wine lists.

The clamor for offbeat fizzy wines can be traced almost directly to a groundswell of enthusiasm for natural wines. “I think people are becoming more interested in things that are handmade, and that’s part of the reason why people are into pét-nats—because they’re interesting and experimental,” Colston says. “They’re not just delicious but really make you think.”

As with the intense focus on production methods in the natural-wine world, the ideological split for sparkling wine stems largely from the ways the wines are carbonated. Champagne-style wines—at least from the more commercially oriented brands—are often made using the methode champenoise or methode traditionelle process, in which a second fermentation is induced by adding sugar or yeast.

Many of these alternative sparkling wines—often lightly fizzy, cloudy and sometimes sweet—are made by letting the wines ferment entirely in the bottle in the centuries-old methode ancestrale manner. The results yield wines that tend to have a more gentle bubble, and a delicate, almost creamy texture. “They’re living creatures and still evolving—even to the point to volatility,” says Zach Ligas, sommelier at Semilla in Brooklyn, New York, on the attraction to wines made in the ancestrale method. “They’re not controlled in the ways that Champagne is. They’re wild children, and that resonates with me.”

Ligas stocks the sparkling section of the list at his vegetable-centric restaurant with a mix of grower Champagnes and methode ancestrale–style wines, such as Partida Creus’s Ancestral VN Blanco and Robinot’s Les Annees Folles Pinot d’Aunis—wines that he feels have a direct tie to the terroir-driven still wines that populate the rest of the list. “I think a lot of times people forget that sparkling wine is just still wine with bubbles,” he says.

“When people drink Champagne, they want fine bubbles consistently throughout the wine. But these lightly sparkling wines are more of an expression of the grapes than it is the structure and keeping the bubbles. The effervescence is an add-on rather than the base [on which to evaluate] the wine.”

Ligas also sees these new fizzy wines as a bridge to normalizing the idea of sparkling wine as a dinner wine rather than an aperitif. Sommeliers have long recommended sparkling wine as a tool in the food-pairing arsenal, but habits of using Champagne solely as a celebratory drink are hard to break. But at Semilla, Ligas says these ancestrale-style wines work especially well with the hyper-seasonal food. “A huge amount of our menu is sourced from foragers; during mushroom season, 90 percent of the menu is mushrooms,” he says. “A lot of these wines have complexity and umami [that makes a good match].”

Pét-nat, short for pétillant-naturel (“naturally bubbly” in French), may be the most visible sector of the new sparkling cohort. The term originated with a group of Loire winemakers in the 1990s, including Theirry Puzelat and Christian Choussaurd, two leaders of France’s natural-wine movement, who resurrected the ancestrale style of making fizzy wine. The moniker caught on and now the pét-nat style can be found in far-flung locales, from New York and Vermont to Oregon and Australia, often sealed with a bottle cap and bearing a tongue-in-cheek name.

We’re now deep enough in the ancestrale renaissance that distinctions between groups can be made. Trendsetting Francophile wine bars, such as New York’s Wildair, Ten Bells or Brooklyn’s Four Horsemen, tend to stick primarily to the French and Euro-centric examples of pét-nat, often drawing on a deep roster of vins de France from the Loire and Languedoc-Roussillon, as well as outliers from Austria, Spain and Italy.

But creative producers in the United States and Australia are experimenting with the style as well, and the range is on display on Matty Colston’s list at Parachute. Colston, who carries examples from Finger Lakes, Oregon, and the Adelaide Hills on his list, sees excitement with new wave pét-nat in the less-regulated appellations. “It’s the wild west,” he says. “There are no rules or boundaries.”

It’s precisely that freedom that Colston finds appealing. “Parachute is a very fun environment,” Colston says. “It’s lively and loud—the food looks colorful and playful.” In building a list, Colston says he looks for wines that can match that energy, and that’s why he chases down wines from emerging regions. For example, he tracked down the importer for Domaine Lucci, an in-demand Australian natural-wine producer, in order to become among the first to sell the Lucci wines in the region. Citing a shift in Australian focus from Shiraz to grapes better suited for certain area’s cool-weather climate, he says, “It’s time for their voice to be heard.”

Given the increasing prominence of the extra-brut, no-dosage style of Champagne in the grower arena, it’s surprising, perhaps, that slightly sweet wines are proving a particularly successful pocket of alternative sparklers. But the appeal is easy to understand: The combo of slight sweetness and bubbles makes for wines that are super-easy to drink and tend to work especially well with bold, spicy fare.

At Night + Market Song in Los Angeles’ Silver Lake district, chef Kris Yenbamroong stacks his sparkling-wine section with sweeter-style pét-nats—such as Agnès et René Mosse’s Moussamoussettes and Les Capriades Piège à Filles Vin de France—to balance his sometimes fiery, often far-out Thai-inflected cooking (think: sour fermented pork sausage or spicy pork-blood larb). While spice and heat may slay more delicate wines or clash with the tannins of structured reds, these sweet sparkling wines can handle a beating from food. “I am drawn to the idea that [pét-nats] can function as a thirst-quenching beverage, much in the way that Thai beer does,” Yenbamroong says. “The flavors are simple and direct.”

The rise of the artisanal sweet sparkler is, in many ways, a funhouse mirror to the surging popularity of Moscato in the mainstream wine world. Both trends are poised to challenge the conventional wisdom that dry wines are somehow more sophisticated or better with food.

But where do these new fizzy wines go from here? Given the sheer weirdness of some alternative sparklers, it’s hard to imagine the category expanding beyond adventurous restaurants and zeitgeisty wine stores. There are signs, however, that producers are looking to appeal to a larger market. The first wave of pét-nats were volatile, on account of being bottled in the midst of fermentation. While bottling wine in the ancestrale method looks easier in some ways (cap the bottle and you’re done), it takes a fair amount of technical know-how to get the correct balance of sugar levels and yeast counts. That unpredictability—the occasional over-foaming and off-flavor—was long viewed by fans as a feature, not a bug, but it made selling the wine to skeptics somewhat difficult.

A new wave of producers, however, are looking at ways to clean up at least some aspects of the winemaking. One step is to disgorge the sediment out of the bottle after fermentation to reduce the exposure to potential off-flavors. Respected winemakers such as Baptiste Cousin, son of natural-wine legend Oliver Cousin, and California’s Michael Cruse, who makes the cult labels Ultramarine and Cruse Wine Co., are already producing well-liked pét-nats in this manner. This could prove especially useful in the restaurant arena, where sommeliers might want to minimize their exposure to flawed bottles.

One other factor bodes well for attracting a larger audience: the price. While quality Champagne tends to come with a triple-digit price tag at restaurants, these new classes of sparkling wine are often more affordable—much more so—which can help encourage customers to experiment.

Chef Kris Yenbamroong says that price is a big reason why he stocks so many pét-nats. “We tend towards ‘everyday drinkers’ that won’t break the bank,” he says. “We’re not an expensive restaurant, and we enjoy being the sort of place you can pop in to more than once a week.”

And being both comparatively accessible and offbeat is a combo that could bode well for the adoption of the style. “I think nerds are taking over commercial wine markets,” says Zach Ligas of Semilla, on the rising popularity of pét-nat. “It’s a cool time to be working in wine.”

Jennifer Fiedler
Jennifer Fiedler is a wine and spirits writer and former editor at Wine Spectator. Her most recent book, The Essential Bar Book: An A-to-Z Guide to Spirits, Cocktails, and Wine, with 115 Recipes for the World's Greatest Drinks was published by Ten Speed Press in 2014.